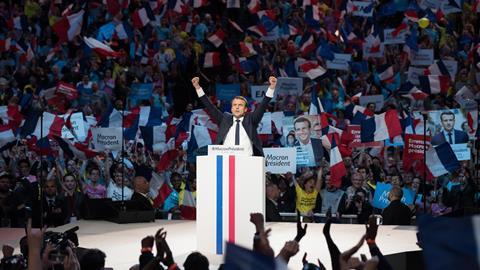 ‘We’re all delighted,’ exclaims Édouard Brézin, theoretical physicist and member of the French Academy of Sciences, talking about Emmanuel Macron’s election as French president. Centrist Macron won the run-off election against his far-right rival Marine Le Pen with 66.1% of votes. His campaign was characterised by its pro-European stance, which many researchers welcomed. However, Macron will find it difficult to implement his proposed policies unless his supporters gain a majority in the upcoming parliamentary elections.

‘The election of Emmanuel Macron is crucial first of all for the European Union itself and is also very important for science and research in the EU and in France,’ says 1987 chemistry Nobel prize winner Jean-Marie Lehn from the University of Strasbourg, who adds that he was relieved to hear a majority had voted against Le Pen. ‘Macron seems to be aware that Europe and access to European institutions such as Cern are essential for science,’ Brézin says. Macron’s emphasis on international exchange ‘is excellent news for all of us’, agrees Didier Astruc, nanoscience and catalysis researcher at the University of Bordeaux.

In contrast, Le Pen’s proposed anti-European policies, including a possible French exit from the EU or ‘Frexit’, had been described as a ‘terrible danger’ by research institute directors in an open letter. ‘The election of Le Pen would have been a disaster for French and European research,’ Astruc says. ‘There is satisfaction in France that the extreme right candidate has been avoided.’

Macron has been vocal about his dedication to fighting climate change and invited US climate scientist to come to France in a video posted in February. The president-elect promised to invest €30 billion (£25 billion) in renewable energy to cut the share of the country’s electricity generated by nuclear from 75% to 50% by 2025. However, Brézin cautions that ‘renewables are currently intermittent power sources’, which can’t be fully exploited until better ways to store energy are found. Moreover, Macron said he would prohibit exploration of shale gas, and he firmly opposes genetically modified crops, both in human food and animal feed.

Macron has been vague on other science issues during his campaign, but has pledged to grow spending on research and innovation from the current 2.3% to 3% of GDP. He wants to increase support for research organisations such as the French National Center for Scientific Research, better known as the CNRS, and called the last administration’s cuts to the French National Research Agency – the institution tasked with funding scientific research – ‘a mistake’. ‘We hope that there will be a significant increase in funding, because the new president is strongly in favour of culture and scientific progress,’ Astruc says.

The chemical and pharmaceutical industry, meanwhile, might benefit from the former finance minister’s proposed business-friendly reforms such as reducing corporation tax by 8.3% and introducing flexibility to renegotiate the 35-hour working week. Macron is also in favour of free trade deals like the European–Canadian Ceta agreement.

However, only after the National Assembly elections next month will it become clear if any of Macron’s policies will come to fruition. As Macron is currently the only elected representative of his party, En Marche!, his yet-to-be-announced candidates may have trouble securing a majority in parliamentary elections – a situation that could paralyse the French political system. As a first step, the president-elect will appoint a prime minister shortly after taking office on 14 May.

‘We were scared that what had happened in the UK, with Brexit, and in the US, with Trump, would foster an absurd far-right movement in France. I’m delighted that we are free of that, although it doesn’t mean we know what will happen after the parliament election,’ concludes Brézin.