System prevents hyperglycemia in rats by acting like an artificial liver 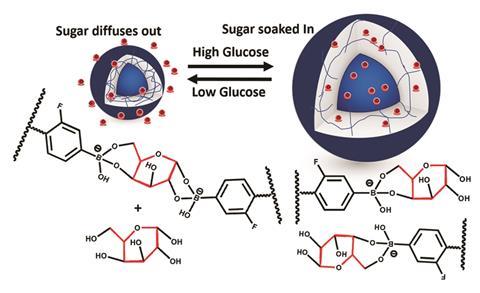 The nanogel reacts to glucose levels by swelling or shrinking

Researchers in Canada have developed a non-hormonal, insulin-free treatment for hyperglycemia using a glucose-responsive nanogel. It can be injected to keep blood sugar levels within a healthy range, and could treat diabetes in insulin-resistant patients.

An estimated 415 million people have diabetes worldwide, of which about 10% suffer from type 1 diabetes. Regular insulin injections to lower blood sugar levels are the only way to treat type 1 diabetes, and they are a common treatment option for those with type 2 – but they aren’t as effective in obese patients or those with diseases such as HIV, whose body tissues are often less sensitive to insulin. Scientists are investigating insulin-free treatments, such as hormone therapy, but these have stability problems and could cause unwanted side-effects.

Now, Shirley Wu and her team at the University of Toronto have developed a zwitterionic nanogel that reversibly binds to glucose and regulates blood sugar levels.

By combining a boronic acid-containing monomer with a co-polymeric zwitterionic nanogel, they made an injectable gel that absorbs and releases glucose depending on blood glucose levels in type 1-diabetic rats. The nanogels keep glucose concentrations within a safe range for at least 6 hours – longer than insulin – and can’t reduce blood sugar to an unsafe level.

‘This is very exciting. The polymer-based materials alone can reduce high blood glucose without causing hypoglycaemia,’ comments Zhiqiang Cao, a biomedical engineer and diabetes researcher at Wayne State University in the US. ‘The magic lies in the ability to absorb glucose at high levels and release it at low levels.’

There’s no sugar-coating here – at high concentrations of glucose in the blood, boronic acid groups in the nanogel form 1:1 complexes with glucose, causing the nanogel to swell and store the glucose in the polymeric network. At low concentrations, the boronic acid groups form 2:1 complexes instead, which leads to shrinkage and the rapid release of glucose into the blood. ‘This overall causes a buffering effect for blood glucose to avoid both hyper- and hypoglycaemia,’ Cao continues. The buffering effect is similar to the role of the liver in the body.

Cao says that Wu’s nanogel is a promising step towards treating diabetic patients with insulin resistance, but further tests are necessary before it can be taken to clinical trials.