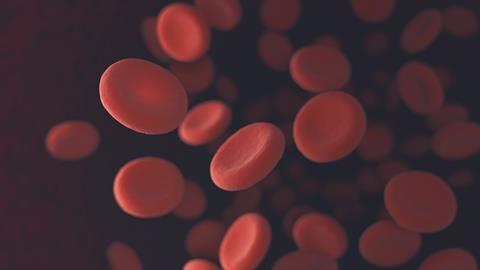 Universal blood for transfusion could be created by hydrogel ‘camouflage’

A chemical framework that shrouds the surface of red blood cells could let people receive transfusions of blood that would be normally be incompatible with their immune systems. This could alleviate pressure on health services, which often experience critical shortages of rarer types of blood supplies.

After the ABO blood group system, the Rhesus system is the next most important – it’s the presence or absence of Rhesus D (Rh D) antigens on red blood cells that determines whether you have ‘positive’ or ‘negative’ blood. Around 94% of people have Rh D positive blood, which means hospitals often have extremely limited supplies of blood for patients with negative blood types.

Now, a 3D molecular scaffold has been developed by researchers in China that hides the Rh D antigens on red blood cells. This could potentially enable Rh D-positive blood to be used in transfusions for people with negative blood types, without risking a severe immune response.

‘The membranes of red blood cells are self-assembled phospholipid bimolecular layers, inlaid with different membrane proteins with sugar chains,’ explains Ben Wang, a biomedical engineer from Zhejiang University. Rh D antigens are proteins that span these lipid bilayers, so a crucial challenge for Wang’s team was finding a way to conceal the antigens without impairing the membrane’s natural fluidity.

‘We supposed that a 3D-scaffold approach mediated by cell membrane anchoring molecules could be used to successfully mask Rh antigens, without changing the native integrity and flexibility of the blood cells,’ says Wang.

To achieve this, Wang and his co-workers developed a polysialic acid–tyramine hydrogel that can be attached to red blood cells’ surfaces. ‘We used amphiphiles similar to the cytomembrane skeleton-phospholipid to anchor enzymes on the cell membrane,’ adds Zhejiang-based biomaterials scientist Ruikang Tang. ‘Then we catalysed the hydrogel monomer crosslinking on the cell surface to create a layer of nanoscale 3D hydrogel scaffold.’ 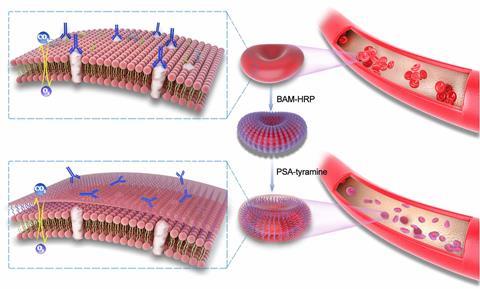 Usually if Rh D positive blood cells come into contact with anti-Rh D antibodies, the cells will clump together, in a process known as agglutination – something that can kill a patient receiving a transfusion. However, when the surface-engineered cells were incubated with anti-Rh D blood serum, no agglutination occurred – meaning that the hydrogel framework had successfully prevented recognition of the Rh D antigens by the antibodies.

The group then tested the engineered red blood cells in two animal models to assess the technology’s potential in blood transfusions. In experiments carried out in mice, the engineered cells appeared to function as well as untreated cells, maintaining blood oxygenation levels and avoiding any unexpected immune responses. They then used a rabbit model to assess the antigen ‘camouflaging’ effect of the framework. ‘Rabbits that received human Rh-positive red blood cells produced antibodies against Rh antigens, but rabbits with an infusion of modified human Rh-positive red blood cells did not produce Rh antibodies,’ says Wang.

‘Engineered red blood cells are an important and emerging field of biomedical research that has implications ranging from improving the availability of critical care, to advancing novel drug delivery systems,’ says Christopher Bettinger, an expert in biomedical engineering from Carnegie Mellon University, US. ‘The results are very compelling and offer an alternative path forward to improving the availability of engineered red blood cells in transfusions.’

Looking to the future, the Zhejiang team plan to work with haematologist colleagues to further investigate the safety of the modified blood cells. They are also keen to see if the surface engineering strategy can be applied more widely. ‘The type matching of platelets is more complicated than red blood cells and the demand is more urgent,’ says Wang. ‘Perhaps a similar method can be further extended to solve the problems hindering type matching of platelets clinically.’