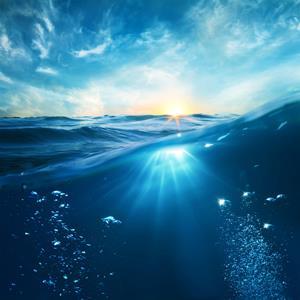 A new scheme for storing the energy from photovoltaic cells, in which genetically modified bacteria reduce carbon dioxide to liquid fuels with hydrogen from water-splitting, has been proposed and partially demonstrated by US researchers.

Photovoltaic cells can convert solar energy to electricity, and the most obvious way of getting fuel from this process is to use the power generated to split water into hydrogen and oxygen. But this approach is problematic – hydrogen, as a gas, is difficult to transport safely, and compressed hydrogen has an energy density of only 5.6 MJ/l, compared with 32.4 MJ/l for petrol. A desirable alternative is to produce liquid hydrocarbons such as alcohols, as far more energy can be stored in the carbon-carbon bond.

Solar electrochemical production of fuels, however, is not straightforward. In principle, hydrogen can reduce carbon dioxide to an alcohol. Unfortunately, inorganic catalysts for CO2 reduction often produce multiple different products. Nature, of course, has been using sunlight to convert CO2 and water into glucose for billions of years through photosynthesis. But plants are much less efficient than modern solar cells at capturing light, typically converting only 1% of the energy falling on them to biomass, whereas the best modern solar cells can convert over 40% of the incident light to electricity.

In new research, Daniel Nocera and colleagues at Harvard University, US, propose coupling the efficiency of a man-made solar cell with the biofuel production capabilities of bacteria. They designed a single reaction vessel which uses solar-powered ‘artificial leaf’ technology to split water, generating hydrogen which a bacterium called Ralstonia eutropha H16 then uses to reduce carbon dioxide constantly fed into the vessel.

The researchers first tried the experiment with wild-type R. eutropha, which converted about 18% of the energy supplied to bacterial biomass over the course of a single day. Next, they used a genetically modified strain of R. Eutropha, developed last year by another group, that produces isopropanol, a potential substitute for petrol with an energy density of 23.9 MJ/l. Overall, the bacteria were able to convert 4% of the electricity supplied to isopropanol. A commercial solar cell converts around 18% of incident light to electricity, which would give overall light-to-biomass and light-to-isopropanol values of 3.2% and 0.7%, respectively. These values are already on a par with fuel crops, and the researchers believe they can be increased further by optimising the reaction and producing better bacteria. 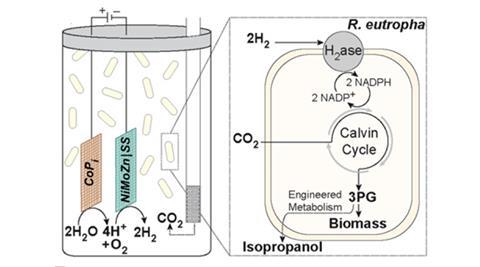 Derek Lovley, a microbiologist at the University of Massachusetts, US, says that while the ability to integrate the water splitting process with the microbial fuel production is novel, the cost savings of integration could be improved by using a different bacterial strain, pointing out that the anaerobic bacteria his own group works with are over 10 times more efficient. ‘The anaerobic bacteria direct 90-95% of the electrons to the reduction of carbon dioxide, making the product of interest,’ he explains. ‘[Whereas] aerobic bacteria direct most of their electrons to the reduction of oxygen to water.’ Nocera argues this is an unfair comparison. ‘With the anaerobic bacteria, you also have to feed them a lot of fuel, there’s also a cost there because you’re not using something, namely oxygen from the atmosphere, that’s basically free,’ he says.

Chemist Matthew Kanan of Stanford University, US, believes that the advantages of the work lie in the specificity and versatility offered by biological production methods. ‘In principle, you could modify these bacteria to produce all kinds of desirable chemicals,’ he says. As a source of fuel, he suspects that inorganic production methods such as chemical catalysis will remain more efficient. ‘That’s what everybody says until you hit a 10% or 12% organism someday,’ responds Nocera. ‘Will you hit 10% with this organism? No. Will you hit 10% using this approach? Possibly, I don’t know.’