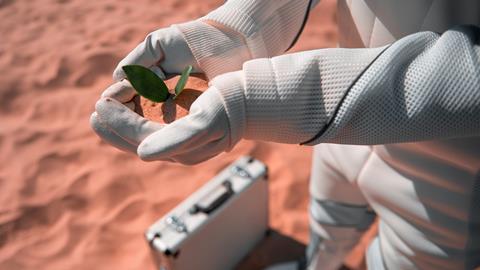 Lettuce could be used to grow drugs on Mars

Lettuce could be used to make drugs for the first human Mars explorers. By infecting lettuce with genetically modified bacteria, researchers have hijacked the plants’ cellular machinery to make pharmaceuticals when and where they are needed.

‘Current estimates are that transporting 1kg of mass to Mars costs about $100,000 (£77,000),’ says Mark Blenner a protein engineer at Clemson University. Taking drugs for every eventuality is, therefore, out of the question. ‘But the more challenging problem is that many medicines and essential nutrients in food will not survive the trip of several months to Mars,’ Blenner adds. Intensive radiation in space can quickly destroy active ingredients, in particular the protein compounds in biopharmaceuticals.

Chemical engineer Karen McDonald from the University of California Davis, US, therefore hopes to repurpose edible plants as miniature drug factories. Seeds are extremely weight efficient for space travel and with McDonald’s technique, they could not only create food but also make pharmaceutical compounds on the spot.

Presenting at the American Chemical Society national meeting in Orlando, Florida, McDonald and colleagues have shown that they can use lettuce to make parathyroid hormone (PTH). This bone regeneration peptide counters the decrease in bone density that’s a result of low gravity living.

The researchers infected lettuce with Agrobacterium tumefaciens carrying a custom-made DNA sequence encoding for PTH. ‘The bacteria can transfer pieces of DNA from itself to the plant,’ explains McDonald, who is also a member of the Center for the Utilisation of Biological Engineering in Space. ‘Once the DNA is inside the plant cell, it’s transcribed and translated into the functional protein.’ Six days after infecting a fully grown plant with agrobacterium, the team harvested lettuce containing 10mg/kg PTH.

To separate PTH from other plant components, McDonald’s team created a handheld centrifuge – a similar design to the paperfuge, but that can hold standard centrifuge tubes. For the final purification stage, the researchers require PTH-capturing nanoparticles, which they can also make from plants. A modified virus – multiplied by the thousands inside infected plants – carries the ligand that acts like a fishing hook for PTH.

On Earth, scientists tend to use microbes like E. coli or yeast to make biopharmaceuticals. Although plants mature slower than microorganisms, they don’t need to be grown in sterile bioreactors. Blenner says plants have two advantages over microorganisms. They make more human-like modifications to proteins and a drug made in a plant can be simply eaten.

‘Big questions remain over how to actually grow plants on Mars,’ McDonald says, however. ‘Protecting the plants from radiation will likely mean keeping them underground, which adds the challenge of delivering light,’ Blenner says. While ideas involving optical fibers exist, other questions remain to be answered. ‘We don’t [yet] understand how space conditions will impact the interactions between members of the soil microbial community,’ Blenner adds.