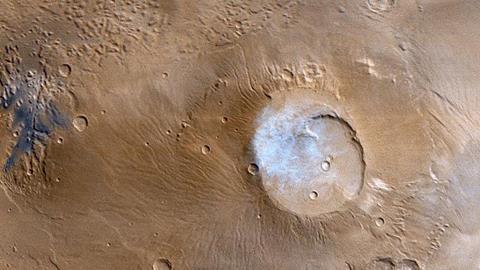 In its early history, Mars had abundant liquid water flowing freely in rivers and forming giant lakes. But around 3.6 billion years ago that all changed and Mars became the mostly cold, arid planet we know today. However, a series of wet spells during the red planet’s first 600 million dry years have mystified scientists. Now, US researchers propose that changes in Mars’ axial tilt could have caused its ice to melt, releasing the powerful greenhouse gas methane from frozen methane clathrates.1

Some planetary scientists have attributed the seemingly random perturbations in Mars’ climate to catastrophic events such as asteroid impacts or volcanism, but models suggest rainfall triggered by these would have been too brief to explain these inundations. Mars’ planetary tilt was another possible culprit and it wanders chaotically, occasionally changing its orientation by 10° to 20° over the course of around 10 million years. In 2013, separate teams led by Edwin Kite of the University of Chicago in Illinois and Michael Mischna of Nasa’s Jet Propulsion Laboratory in California independently constructed models to investigate the effect of the planet’s tilt on climate.2,3 ‘[Both teams] found that this is a marginal explanation that only just manages to produce liquid water, which is why we were both keen to study additional feedbacks,’ says Kite.

Methane – a greenhouse gas around 34 times as potent as carbon dioxide – can be trapped under pressure in ice to form methane clathrates. Kite, Mischna and colleagues once again modelled a shift in the planet’s tilt, but this time they included methane clathrates in their calculations. The model suggested that as either one of the poles or the equatorial region received more solar radiation some of the Martian ice – and the methane clathrates – melted and huge amounts of trapped methane were released – the potential of melting methane clathrates to amplify climate change on Earth is also a significant concern. The team found that the release of methane caused further warming as more methane clathrates melted and this led to rain and bodies of open water. Eventually, after 100,000–1 million years, ultraviolet light broke down the methane and the planet returned to its icy, dry state. The model predicts differences in the atmospheric concentration of methane with longitude, and they hope that the European Space Agency’s ExoMars orbiter may detect these.

Geologist Scott Murchie of Johns Hopkins University in the US is impressed, saying: ‘Geologically relatively young [sedimentary] deposits on Mars have been difficult to explain, and this paper describes a believable mechanism for meltwater formation of sufficient volume and duration to explain the lakes that are observed to date from [these periods].’ Astrobiologist James Kasting of Penn State University, US, cautions that methane clathrate formation on Earth requires microbial action. ‘Maybe there are other methods, but I don’t recall seeing a lot of detail on this in their paper,’ he adds. Nevertheless, he agrees that ‘getting this hypothesis out there is a good thing’.