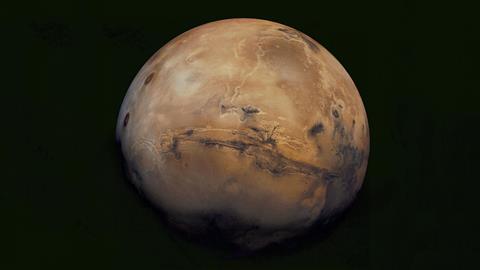 Is it microbes on Venus or just lifeless planetary processes? Discovery could help scientists identify life on other planets

The complexity of molecules can determine unambiguously whether they were made by living organisms or not, say researchers – a discovery that could have profound implications for the search for alien life.

The team led by Lee Cronin of the University of Glasgow, UK, has devised a measure of molecular complexity called the molecular assembly index (MA), and used it to study a variety of samples, including one from a meteorite that fell to Earth in the 1960s.

Their research suggests that complex molecules created by biological organisms have an MA of 15 or greater, and can be distinguished from molecules created by non-living processes, such as volcanoes or atmospheric chemistry, which typically have an MA of 12 or lower. The method could be used to analyse material samples from the solar system or the light from distant exoplanets to tell unambiguously which contain evidence of biosignatures – chemicals produced by living organisms – regardless of the chemistry they are based on. 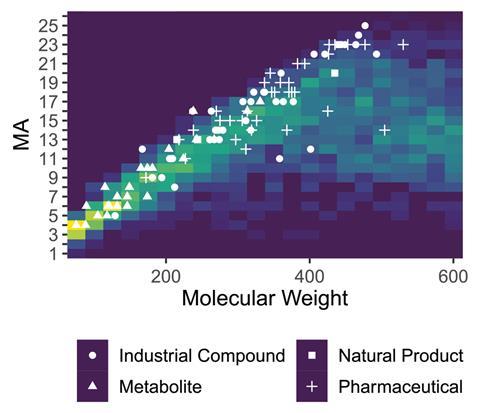 The team calculated the MA of 2.5 million molecules from the Reaxys database. The color scale indicates the frequency of molecules in a given molecular weight and MA range, increasing from dark purple (0) to green and yellow (1) . The white labels shows how the MA varies for some compound types

The MA index is based on the smallest number of chemical steps needed to create a molecule artificially. Simple molecules like carbon dioxide have only a single type of carbon–oxygen bond and so have an MA of 1, but complex molecules with many different bonds and chemical groups have much higher MAs. One example is Taxol, a chemotherapy drug refined from the bark of the Pacific yew tree, that has a chemical formula of C47H51NO14, a molecular weight of 853.9 and an MA of 30.

The study used mass spectrometry to determine the MA of biological samples – such as yeast cultures, seaweed and home-brewed beer – and inorganic samples such as quartz, sandstone and granite. The researchers also analysed substances now dead but once alive, such as coal, and blinded samples of unknown origin, including one from the carbonaceous chondrite meteorite that fell near the Australian town of Murchison in 1969. The Murchison meteorite sample contained millions of molecules, but none showed an MA of above 15. ‘Murchison is dead and has always been dead,’ Cronin says.

MA is agnostic of the method used to determine it – mass spectrometry, nuclear magnetic resonance, infrared spectroscopy or others. It could be used on spacecraft searching for life in the solar system, on spectroscopic data of the light from distant planets or by laboratory researchers seeking evidence that they’ve created synthetic life, Cronin says. 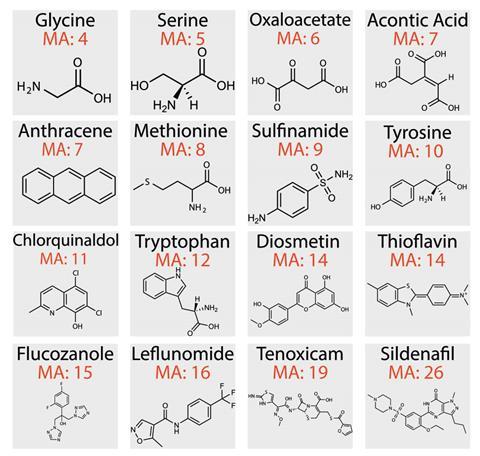 16 of the 2.5 million MA values the researchers calculated for molecules of different complexities

In the case of the phosphine detected on Venus, which has been proposed as a sign of microbial life in the atmosphere, the simple molecule has the lowest possible MA of 1. That means it could never be an unambiguous biosignature, and indeed the researchers involved have gone to great lengths to try and rule out non-biological origins, Cronin says.

‘One of life’s unique characteristics is that it builds complex and otherwise improbable molecules,’ says Caleb Scharf, the director of astrobiology at Columbia University, US. ‘The trick is to evaluate that improbability, and this work describes what looks to be a robust and well-motivated approach utilising the known rules of chemical assembly pathways.’

‘By devising a metric for molecular complexity, and showing that it is a robust indicator of past or present biological activity in environmental samples, the [researchers] have developed a powerful tool for astrobiology,’ says planetary scientist Ian Crawford from Birkbeck, University of London, UK. ‘Given that we as yet know nothing of extraterrestrial biology, it is especially significant that the technique relies on detecting what life does – ie build molecular complexity – rather than having to rely on some definition of what life actually is.’