Molecular snare threads through itself under redox conditions 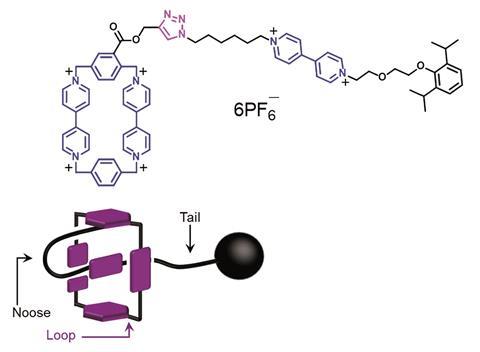 The world’s smallest lasso has been created by scientists in Saudi Arabia and the US. The molecular device threads through itself, forming a reversible noose, in response to chemical and electronic stimuli.

The research team, led by 2016 Nobel prize-winner Fraser Stoddart of Northwestern University, were inspired by naturally occurring lasso peptides – molecules produced by a variety of bacteria, which consist of a linear peptide tail laced through a macrolactam ring.

The new lasso features a loop containing two (doubly) positively-charged bipyridinium units, and a tail which includes a third bipyridinium unit. When treated with zinc dust, each of these units is reduced – giving an overall three-electron reduction which produces a trisradical, tricationic species. Radical-pairing interactions between the bipyridinium units, then cause the tail to thread through the loop, creating the reversible molecular noose. Upon re-oxidation, the lasso-fragment unlaces itself, returning to its original conformation.