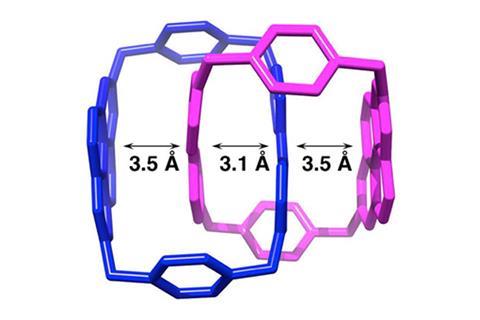 One of the three new stable catenane radicals

Three catenanes – molecules consisting of two interlocked rings – are the first examples of a new class of stable radical.1 The compounds have up to seven different oxidation states, making them promising for switchable computing bits.

Although most molecules with unpaired electrons are highly reactive and exist only fleetingly, there are a few radicals that are stable for days or even years. Some of these persistent radicals benefit from to resonance stabilisation – sharing the lone electron between several atoms – others have large substituents surrounding the lone electron bearing atom, meaning they can’t react. However, making stable radicals remains challenging.

Now, a team led by Zhichang Liu and 2016 Nobel prize winner Fraser Stoddart from Northwestern University, US, has used its expertise in mechanically interlocked molecules to make a new class of stable radicals. Their three catenane radicals – one of which they had previously reported2 – are purple solids stable in air and water. The unpaired electron is shared by atoms sitting protected on the inside of the interlocked rings, spectroscopic and solid structure analysis showed.

The three catenanes have five, six and seven different redox states, which can be switched between by applying low voltages. Switchable molecules like these might one day replace the significantly larger magnetic particles currently used in hard disks, allowing for high-density data storage.