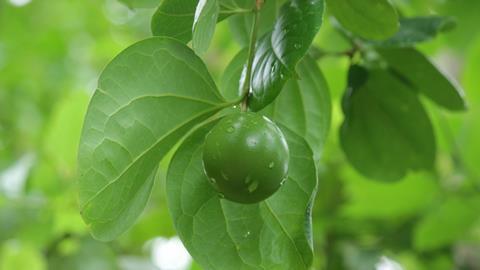 Mystery of how plants make strychnine solved 75 years after characterisation

Seventy-five years after strychnine’s structure was first characterised, researchers have discovered the complete biochemical pathway that enables nature to produce this highly poisonous and complex molecule. The work could help scientists bioengineer potent drug candidates, as well as better understand how plants make other complex chemicals.

Strychnine, an alkaloid found in the seeds of the poison nut tree, Strychos nux-vomica, and related species, is one of the most bitter and poisonous substances. It was once used as an ingredient in health tonics, but it was for its poisonous, spasm-inducing effects that it became renowned for, often featuring in murder mysteries and thrillers, including Agatha Christie’s first novel and Alfred Hitchcock’s Psycho.

The natural product was first isolated in 1818 but it wasn’t until 1946 and 1947 that its structure was characterised independently by Robert Robinson and Robert Woodward, respectively. Regarded at the time as the most complex organic molecule known, by 1954 Woodward had famously cracked its total synthesis, a defining moment in the field organic chemistry. Yet a puzzle remained.

‘It seemed hard to imagine that the total synthesis of this molecule had been achieved, but we still did not understand how the plant made this molecule,’ says Sarah O’Connor, whose team at the Max-Planck Institute for Chemical Ecology in Jena, Germany, set out to solve the mystery.

Part of strychnine’s biosynthetic pathway, which begins with the amino acid tryptophan and geranyl pyrophosphate, had been proposed by Woodward in 1948 and was later confirmed by others in the early 1970s. However, most of the enzymes and corresponding genes required for the seven conversion steps between each intermediate to arrive at strychnine had remained unknown.

Previous experiments conducted by O’Connor’s team with a related, but non-strychnine-producing, plant had determined the enzymes behind the first step which forms a common intermediate molecule called geissoschizine. These enzymes, the researchers found, are also produced by the poison nut. But elucidating the six remaining steps was a harder nut to crack.

Earlier studies had already identified the structures of the intermediates. So O’Connor’s team used bioinformatics and chemical logic to work out the most likely way that one intermediate could form the other and what type of enzyme, such as an oxidase or a reductase, could potentially catalyse each transformation. Algorithms then identified genes encoding these possible enzymes that were also expressed in the poison nut.

The researchers then expressed these enzymes in a model plant. Analyses of leaf extracts with liquid-chromatography–mass spectroscopy ultimately revealed the genes and enzymes that made the intermediates up to step five, where the pathway produces a Wieland-Gumlich aldehyde.

Here, the trail went cold due to a mystery piperidone ring that was thought to form from the Wieland-Gumlich aldehyde and lead to the penultimate intermediate, prestrychnine. ‘We were stumped by how the formation of the piperidone ring from the Wieland-Gumlich aldehyde could take place,’ explains O’Connor. Previous work offered clues that acetate was incorporated into the structure. ‘But we had no idea which type of protein could use acetate as a substrate to form this ring.’

To find out, the researchers turned to a related plant species Strychnos potatorum, or the clearing-nut tree, that doesn’t produce strychnine. Crucially, metabolic analyses revealed that strychnine and other alkaloids found in the poison-nut tree are absent in the clearing-nut tree, which instead makes an alkaloid called diaboline. By comparing and contrasting the genes of the two plants, the researchers identified an enzyme unique to poison nuts and the biosynthesis of strychnine.

However, it was the final step from prestrychnine to strychnine that threw up the biggest surprise, says O’Connor. The team fed a labelled precursor to Strychnos nux-vomica and found that the last step of strychnine biosynthesis was very slow in the plant. They also couldn’t find any enzymes that could accelerate the process. ‘Surprisingly, when lead author Benke Hong analysed a prestrychnine sample that had been stored at room temperature for a week, it had partially and spontaneously converted to strychnine.’