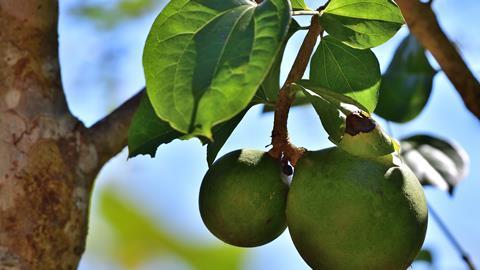 This week, Simon Cotton takes us into the world of cloaks and daggers by focusing on the poisonous compound Strychnine

This week, a poisonous compound, which has proven popular amongst writers of murder mysteries. Taking us into this world of cloaks and daggers is Simon Cotton:

'It isn't strychnine, is it?' says one of the characters in The mysterious affair at styles, Agatha Christie's first published novel. But of course it is. And of course, Hercule Poirot duly solves the mystery of the murder of Emily Inglethorp. Agatha Christie wrote 80 detective novels and became known as the Queen of Crime. She was one of many writers to use the extreme toxicity of this molecule.

Poisoners often masked its bitter taste with alcoholic drinks, coffee or hot chocolate; and there were several famous 19th century murderers who has recourse to it, notably two doctors, William Palmer of Rugeley and Thomas Neill Cream, the Lambeth Poisoner. 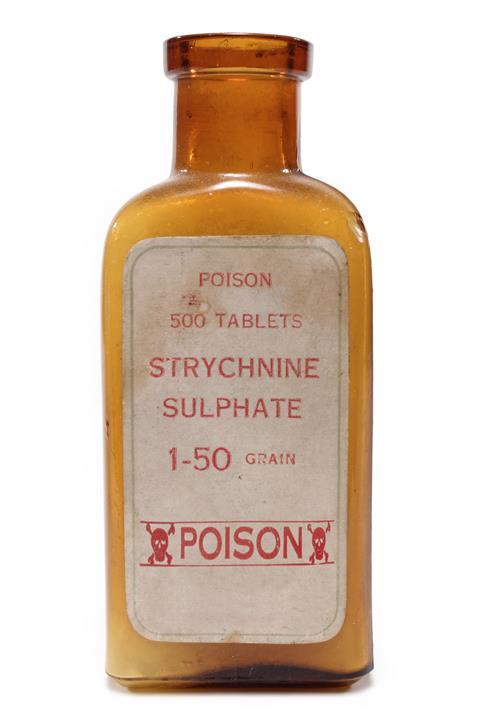 The symptoms of strychnine poisoning are unmistakeable: the patient has violent convulsions and contortions, notably arching of the back, while the jaw muscles can contract, leaving the victim with a fixed grin.

Arthur Conan Doyle described the signs of strychnine poisoning in his Sherlock Holmes mystery The sign of the four.

'By the table, in a wooden arm-chair, the master of the house was seated all in a heap, with his head sunk upon his left shoulder, and that ghastly, inscrutable smile upon his face. He was stiff and cold, and had clearly been dead many hours. It seemed to me that not only his features but all his limbs were twisted and turned in the most fantastic fashion.'

No wonder that novelists and scriptwriters need little excuse to bring strychnine into their plots.  Alfred Hitchcock has Norman Bates use strychnine to kill his mother and her lover in Psycho.

It is so poisonous that strychnine was used for years to get rid of rodents and birds, but in September 2006 the EU banned its use for killing moles, as it causes them unnecessary suffering.

Strychnine operates by blocking a glycine receptor that stops motor nerves in the spinal cord from operating normally. It heightens sensitivity to stimuli, resulting in excessive muscular contractions. Death is a result of either suffocation by paralysis of breathing, or of exhaustion from the continuous convulsions. Strychnine does not cross the blood-brain barrier, so the victim remains conscious. Because the symptoms are enhanced by noise and light, victims must be kept quiet to ease their suffering.

Plants are brilliant synthetic organic chemists, and the Strychnos nux vomica tree is one of the most talented, as strychnine has a fiendishly complicated structure, containing seven rings fused together. The plant makes it from the amino acid tryptophan; no one is sure why, though this toxic and bitter-tasting molecule could be a deterrent to predators.

In Victorian times, doctors would use tiny amounts of strychnine as a stimulant. It even became the first ever performance-enhancing drug in sport. At the 1904 Olympic Games in Saint Louis, the first competitor to cross the line in the marathon race was an American named Fred Lorz. He was disqualified as he had completed half the course sitting in a car. Second to finish was an English-born American named Thomas Hicks. He had been struggling half-way round the course, so his trainer gave him a stiff brandy and also an injection of strychnine. This perked Hicks up, but he needed another injection four miles from the finishing tape. He survived to win, though the strychnine nearly killed him. He turned his back on athletics and lived to 88. 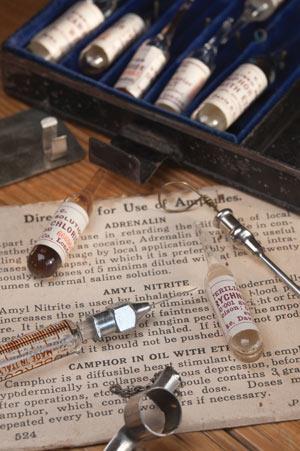 Strychnine was first isolated by ether extraction from the beans of Strychnos ignatii in 1818 by Pierre Pelletier and Joseph Caventou, the same French scientists who isolated quinine. Chemists argued over its structure for years and it was eventually determined by Sir Robert Robinson in 1952, who remarked: 'For its molecular size, it is the most complex substance known.'

Its synthesis has tantalised chemists for many years, presenting the American master of synthesis Robert Burns Woodward with one of his greatest challenges, before he reported its total synthesis in 1954. Even today, chemists have competed to find ways of making strychnine in the fewest steps possible or else by mimicking nature in creating a common core that can be used as a source of several different molecules.

Woodward himself recognised the evocative power of this humble alkaloid, remarking in 1955, 'Certain is it that it has no competitor as the lethal weapon of choice in the literary sphere.' Good old strychnine, where would crime writers be without it?

Possibly left stumped and forced to write another genre. That was Birmingham University's Simon Cotton with the dark, toxic chemistry of strychnine. Now, next week, more mystery but about the workings of our nervous system.

The question that began to plague the neuroscientific community was this: assuming that these gaps - these so-called synapses - did in fact exist, how did nerve impulses get across them? How did they jump from one neuron to the next? In the 19th century, German physiologist Emil DuBois-Reymond had put forward the idea that the transmissions were either electrical or chemical. But for decades, no one could establish which.

Well, as this series is about chemical compunds, I'm sure you can figure out which it was. But to find out the actual chemistry of acetyl choline, and its important role as a neurotransmitter, join Hayley Birch in next week's Chemistry in its Element. Until then, thank you for listening. I'm Meera Senthilingam.