Iron(III) phthalocyanine chloride can be used as a ‘molecular drone,’ one which lands on a surface, bonds to a single atom and flies off with it – leaving a vacancy in its wake – researchers from Italy have demonstrated. The finding, the team say, may open the door to rapid atomic manipulation and fabrication on a relatively large scale.

The ability to manipulate the positions of individual atoms and, by extension, vacancies has enabled the creation of novel, atomic-scale devices with myriad potential applications. Proof-of-concept devices made to date, for example, include logic patterns, single atom information storage and atomic arrays with potential for use in quantum computing. All of these examples were produced by directly manipulating atoms using the tip of a scanning probe microscope (SPM). While a ground-breaking approach, this method has certain limitations.

‘Atom manipulation by scanning probe microscope allows absolute spatial control,’ explains chemist Massimiliano Cavallini of the Italian National Research Council. ‘However, despite some tentative parallelisation, you can only manipulate atoms one by one, using complex instrumentation available in a limited number of laboratories.’ In addition, most of the atom-scale devices developed to date were manufactured in an ultra-high vacuum and under cryogenic conditions – meaning that the patterns produced tend to be unstable under ambient conditions.

Inspired by how some molecules are able to perform similar action to SPM tips – namely, rearranging or exchanging atoms with a surface – Cavallini and colleagues turned to iron(III) phthalocyanine chloride, a compound which can form coordination bonds using its metal. ‘Iron(III) has a strong capability to form octahedral complexes. It completes its coordination shell by bonding an atom of the surface, in our case iodine, which is a good ligand for iron,’ Cavallini adds. The team used a surface made of iodine(I)-modified silver(III) – however, in principle, the technique can be used on all non-metallic terminated surfaces, Cavallini explains.

In their demo, the team showed how, in a simple electrochemical cell at ambient conditions, lowering the potential caused the ‘drones’ deposited across the surface to pick up atoms and leave vacancies in their wake. Furthermore, once a vacancy has been formed, a substitute atom can be dropped in its place by mean of underpotential deposition. It may even be possible eventually to adapt the drones to add atoms onto surfaces without creating a vacancy first, Cavallini says.

Samuel Jarvis, an expert in nanoscale characterisation from Lancaster University who was not involved in the study, said the paper shows the beginnings of a viable method for atomic manipulation that could be used at large length scales. ‘This is a great achievement, but what it needs now is some way to direct the manipulation to control the pattern it generates, and this is where SPM still has an edge,’ he explains. ‘If this is a molecular drone, then the next step is to develop a GoPro so it can see where it’s going.’ 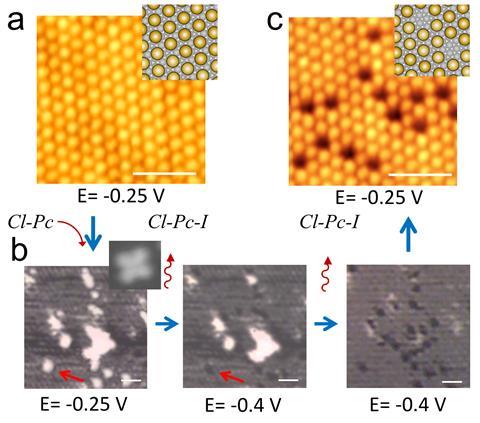 ‘There is still some way to go to control the process, as for now the paper lacks a quantitative description of spatial distribution of vacancies and, in the examples, the vacancies are rather densely clustered – more akin to what would be produced with well-known “etching”,’ agrees Sandrine Heutz, a functional molecular materials researcher from the London Centre for Nanotechnology and Imperial College London. However, she adds, ‘there is an enormous library of phthalocyanine derivatives and growth modes that could be used in the future to translate this discovery into ordered patterns, so there is potential that this could actually work’.

With their initial study complete, the researchers have this issue firmly in their crosshairs. ‘At the moment, the drone adjusts its positioning [from where it was deposited] only a few angstroms by exploiting the interaction between the metal atom of the molecule with an atom of the surface, Cavallini notes. However, he adds, ‘the use of self-assembled monolayers – phthalocyanines are prone to form these – will allow the fabrication of ordered arrays of atomic vacancies with control in the positioning of a few nanometres’.