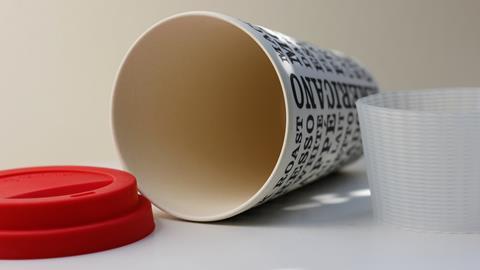 Coffee cups made from resin containing bamboo fibre – often sold as bamboo mugs – leach so much harmful formaldehyde and melamine into drinks that the German Federal Institute for Risk Assessment (BfR) has warned that they shouldn’t be used for hot liquids.

Bamboo mugs are made from a melamine resin reinforced with bamboo fibres. While they are reusable, they are often marketed as eco-friendly, even though they aren’t biodegradable. Melamine resin is a polymer and in itself not dangerous, but its monomers – 1,3,5-triazine-2,4,6-triamine and formaldehyde – are toxic and can cause cancer.

This summer, a German consumer group discovered worrying levels of harmful compounds being released by bamboo mugs. The BfR’s assessment found bamboo mugs release ‘alarming’ amounts of the toxins into 70°C drinks, up to 30 times the EU’s safe limit for adults and up to 120 times the limit for children. Although one-off exposure to large amounts of these chemicals isn’t necessarily problematic, the BfR estimates that regularly using a bamboo mug poses a serious health risk.

Overall, the BfR tested 228 bamboo mugs for formaldehyde and 180 for melamine. In each case, more than 35% of the cups released harmful substances in amounts that surpassed safety limits. Moreover, the amount of melamine – but not formaldehyde – the mugs released increased with repeated exposure to hot and slightly acidic liquids.

Melamine mugs without bamboo filler were also found to release harmful substances, albeit at significantly lower rates. Analysts at a food control laboratory in Stuttgart suggest that the bamboo fibres decrease crosslinking within the polymer network. Hot liquids soak into the material more easily, hydrolysing and breaking down the resin.