Odd boron compound gets two nitrogen molecules to link up 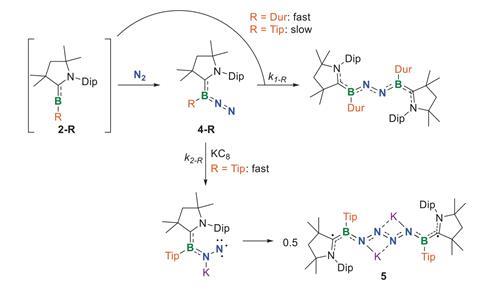 The proposed mechanism for the formation of the dinitrogen dimer, aided by borylene

In the first ever reaction of its kind, chemists have made a chain of four nitrogen atoms by linking up two dinitrogen molecules. While other nitrogen-chain forming reactions require extreme pressure or temperature, this transformation works at close to ambient conditions thanks to a boron mediator molecule.

Unlike its periodic table neighbour carbon, nitrogen doesn’t like to form long chains – and if it does, these are unstable at best and highly explosive at worst. Nitrogen is happiest in the form of dinitrogen, which has one of the strongest bonds known to chemists.

The Haber–Bosch process is one of the few ways to break dinitrogen’s triple bond. It makes ammonia, from which other useful nitrogen chains – such as hydrazine, azides and tetrazenes – are then produced.

Chemists have now for the first time made a tetrazene – a four-nitrogen chain – directly from nitrogen gas with the help of an unusual boron compound. Although nitrogen gas is extremely unreactive, a borylene, a boron analogue of a carbene, reacts with it in the presence of reducing potassium graphite. The result is a dark blue bis-borylene featuring a central four-nitrogen link.

X-ray crystallography revealed the entire structure to be planar, suggesting a delocalised π electron network. The N4 unit resembles an organic tetrazene with the central N–N bond a classic double bond and the terminal N–N linkages closer in length to single bonds.

While borylene complexes had previously shown reactivity similar to transition metals, binding a dinitrogen molecule end-on, this chain-forming reaction has never been observed. This, the researchers write, underscores the boron’s ability to unlock unusual reactivity pathways.