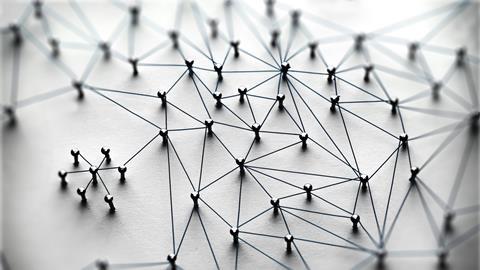 Chematica – software that can plan chemical syntheses – has been used to circumvent drug patents by avoiding protected pathways to target molecules. The new feature is based on an algorithm that can identify and preserve particularly important bonds in the target compound. Using this tool, the creators of the software could find new routes to several known pharmaceuticals. They believe their results could affect the way intellectual property (IP) is viewed in the future.

Network representation of patented syntheses and the ‘essential’ bonds underlying the patented approaches. The top row has networks unifying all reactions in the patents protecting the syntheses of linezolid (A), sitagliptin (B) and panobinostat (C). (Yellow, target molecule; blue, intermediates; and red, starting materials)

Patents are widely used in the pharmaceutical industry. Specialist attorneys spend many hours poring over production processes to make sure that new molecules – or new ways to make them – can be protected. They also ensure that no existing patents are infringed. Mark Pohl, an attorney at LLC Pharmaceutical Life Cycle Management Solutions, US, has been working for pharma firms for many years and knows how this works. ‘One can patent anything which is new, and which you can touch,’ he says. ‘Researchers could also patent a process, for example, a synthetic route to a given compound. You can touch the reactants, the reaction vessel, intermediates and product. So, one can patent compound X, and also patent cooking reactant W at 100°C until it turns into X.’

Finding a way through

Now, an algorithm has been used to upgrade Chematica that could help chemists avoid such protected routes. ‘We show that computers, being able to consider millions upon millions of synthetic pathways, can find solutions that circumvent approaches humans take,’ says Bartosz Grzybowski of the Polish Academy of Sciences and Ulsan National Institute of Science and Technology, South Korea. ‘Even in the case of heavily patent-guarded routes to blockbuster drugs, the machine can find alternatives.’ In the new approach, the computer pinpoints the target’s most important bonds – including those that are most commonly formed in patented routes and those that produce significant structural changes – and uses this information to plan the syntheses. ‘It first identifies the key disconnections on which the existing patents rely,’ Grzybowski explains. ‘Then, it marks the bonds corresponding to these disconnections as “not to be cut” and forces the machine to find alternative routes.’

The team demonstrated how the software works by circumventing patented pathways to three commercial drugs. To start with, they instructed Chematica to bypass known synthetic routes to the antibiotic linezolid. The program found that most protected syntheses relied on the formation of an oxazolidinone ring and marked this ring as the motif to be preserved. It then designed several new paths (using different starting materials) within five minutes. The computer also generated plausible patent-evading syntheses for Merck & Co’s diabetes drug Januvia (sitagliptin) and Novartis’s multiple myeloma drug Farydak (panobinostat). Although the proposed reactions still need to be tested in the lab, Grzybowski’s team has already demonstrated that Chematica’s predictions work. The program, which was purchased by MilliporeSigma in 2017, is a hybrid between a database and artificial intelligence containing about 60,000 reaction rules entered by scientists. ‘It is a very sophisticated platform, uses lots of computing power and does synthetic planning on a par with human experts,’ Grzybowski says. 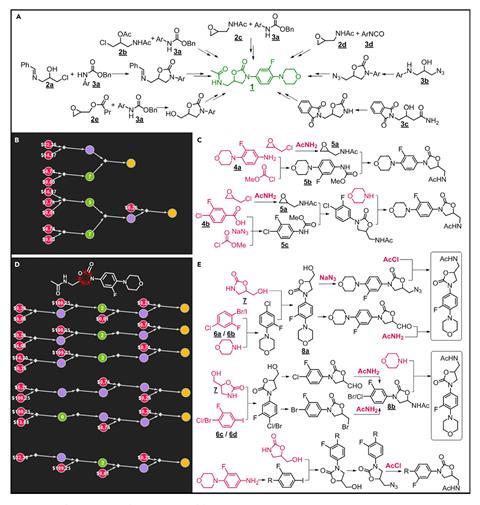 Most patent-protected syntheses of linezolid rely on the formation of the oxazolidinone ring (A). A similar solution was identified by Chematica (B and C) without any bond-preservation constraints. Qualitatively different synthetic plans were found by the program when the bonds within the oxazolidinone rings are preserved (D and E)

Andrea Cavalli, a professor of medicinal chemistry at the University of Bologna, Italy, says that the new results could have an impact on the workflows of pharmaceutical companies. ‘The algorithm can help identify the most suitable chemical routes for making a new molecule, with large freedom to operate in terms of IP,’ he says. Grzybowski points out that tools like this one could help pharma firms make their IP systems more airtight. ‘This illustrates that our current IP schemes are quite inadequate and that computers can help big chemical companies protect their IP more effectively.’ But Pohl says that generic companies could find a good use for this software too. ‘Counter-intuitively, generic and innovator manufacturers may both benefit,’ he says.

The researchers are now upgrading the program to consider environmental and safety issues and tackle the syntheses of very complex molecules. ‘The first paper describing a natural product synthesis planned by Chematica and executed in the lab is close to submission,’ Grzybowski says. ‘A few glitches here and there, but we see the light in the tunnel – and the completion of Chematica after more than 15 years of work.’

Correction: The owner of Chematica was clarified on 25 January 2019