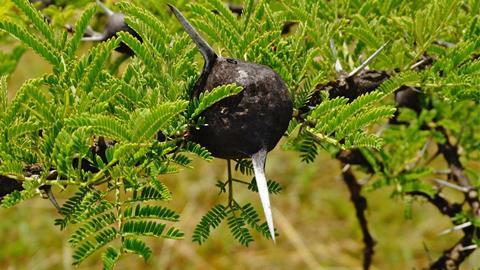 Putting the ‘ant’ in antibiotics

Antibacterial polyketides uncovered in the most unusual of places

An impending crisis due to the rise of antibiotic resistant bacteria means there is high demand for new drugs to treat infections. Natural products shape the backbone of the antibiotics we use today, over half of which derive from compounds made by Streptomyces and other soil microbes. But researchers are now looking in more unusual locations for the next generation of antibiotics.

Matt Hutchings from the University of East Anglia and colleagues have discovered a new family of antibacterial polyketides, called formicamycins, in bacteria living on Tetraponera penzigi, a species of fungus-growing plant-ant. Not only have the team found a new family of molecules but the bacteria that made them, Streptomyces formicae, is new to the scientific community too. ‘Plant roots have lots of Streptomyces bacteria in them, and lots of insects like ants, particularly fungus-growing ants, also pick up these bacteria,’ Hutchings explains.

Greg Challis, a natural products expert from the University of Warwick, UK, thinks the new polyketides are noteworthy. ‘The most interesting property of the formicamycins is that, unlike the fasamycins, it appears more difficult for bacteria to develop resistance to them,’ he says. Challis’s group is also searching underexplored sources for novel antibiotics and adds: ‘There is a more pressing need to find antibiotics with efficacy against multidrug resistant Gram-negative bacteria, such as Escherichia coli, than Gram-positive bacteria such as MRSA and VRE, for which more effective control measures and therapies have recently become available.’

Streptomyces formicae encodes at least 39 natural products and also produces an antifungal, that the team has not yet isolated, so Hutchings believes there are several directions their research could go.