Compact system turns waste plastic into fuels, allowing boats to power themselves while cleaning up the ocean

A retired research chemist has developed a small, portable reactor that uses a catalysed pyrolysis reaction to take discarded plastic and produce gasoline and diesel fuel directly. The idea is that supply ships could have this technology on board, enabling plastic waste collected to be converted into fuel that goes straight into their own tanks.

The technology, developed by Swaminathan Ramesh, formally of BASF, is a metallocene catalyst deposited on a porous support material that, when combined with a controlled pyrolysis reaction, produces high yields of fuel from polyethylenes, polypropolyenes and polystyrenes that needs no further refinement. ‘You don’t have to separate them out, they all can go into the same hopper,’ said Ramesh, who presented his work at the American Chemical Society’s Spring 2017 meeting in San Francisco. ‘The reaction is very efficient – we get a 90% to 95% yield.’ 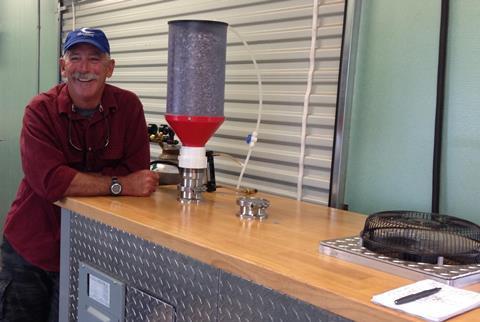 Ramesh explained that the reactor itself is continuously being fed plastic, which is heated as it goes through so that it is the right temperature when it hits the reactor, and the end product is immediately removed. ‘You can just operate it 24 hours a day and it takes up a [small] space,’ Ramesh said. ‘Ten pounds [of plastic] will give you a gallon of fuel depending on how pure the plastic is.’

‘Commercial shipping doesn’t have a method of recycling their plastic, this would be ideal for them,’ Holm stated. He also suggested that remote resort communities would greatly benefit from such technology because they could avoid having to ship out plastic waste to be recycled elsewhere. ‘Forty years at sea I have seen a steady decline in the health of the ocean, most notably the plastics problem,’ Holm recalled. ‘We wanted the option if we found and collected plastic in large enough quantities … to do something practical with it – just burying it in a landfill didn’t seem like the right response.’ Billions of pounds of plastic waste are currently estimated to be littering the world’s oceans.

’Commercial shipping doesn’t have a method of recycling their plastic, this would be ideal for them’

When Holm looked into the existing plastic-to-fuel conversion technologies, he found that these systems were too large to work for his purposes of traveling by boat to remote areas. ‘We wanted something that was small enough to travel with us, hopefully even on board a vessel,’ Holm said.

The hope is that Ramesh’s plastic-to-fuel conversion system will be in operation on vessels in a few years. Ramesh and Holm will kick off a demonstration project for the city government of Santa Cruz, California to see whether the technology can help the city address unrecyclable plastic waste and create diesel fuel to power vehicles.

The next step involves scaling up. Ramesh already has the design plans to build the next-generation of his machine that can produce 2,000lbs of fuel per day, and even another one that can make 10,000lbs daily. ‘It costs around $1.5 million, but you will get back your money in 15 or 18 months, even at today’s low gasoline and diesel prices,’ he says.