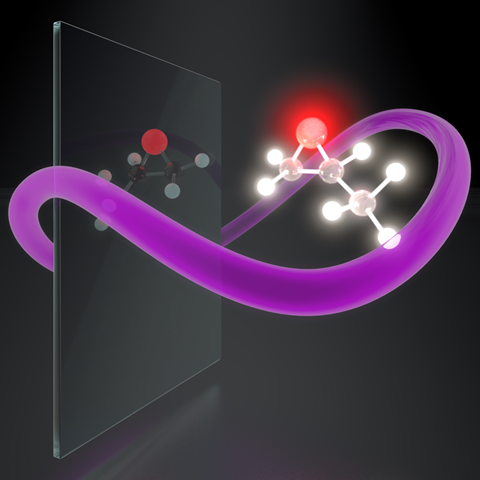 Researchers have designed a new type of light that could, in theory, efficiently identify the left- or right-handed versions of chiral molecules. The approach might enable an effective way to separate, control and selectively react chiral molecules, as well as lead to ultrafast imaging of chiral dynamics in gases, liquids and solids.

Many molecules have left- and right-handed versions called enantiomers that are mirror images of each other. Knowing the handedness, or chirality, of such molecules is essential because their different forms can have drastically different activities: while one enantiomer could be an effective drug, the other could be toxic.

But distinguishing enantiomers is hard because they have identical physical and chemical properties. It is only when they interact with another chiral object that their handedness is revealed. The standard method uses circularly polarised light, where the electromagnetic wave rotates perpendicular to its direction of travel, to distinguish enantiomers, which is much faster, cleaner and more versatile than using chemical means.

The problem, however, is that natural light helices are much bigger than the tiny target molecules and so the direction the light spins is barely ‘felt’ by the molecules. The upshot is that this approach can only detect the differences from very weak non-dipole, or magnetic field, interactions between enantiomers, meaning precise results are hard to come by.

Now, Olga Smirnova’s lab at the Max Born Institute in Berlin, Germany, with colleagues in Israel and Italy, may have overcome this obstacle. They have theorised a new form of synthetic light that is encoded with chirality and acts as a chiral ‘object’ or photonic reagent. Instead of relying on the helical structure of light to detect weak non-dipole interactions, the researchers simulated light with new optical fields in which the electrical field ‘draws’ a chiral trajectory in time, essentially enabling strong optical responses that are sensitive to different enantiomers.

‘Synthetic chiral light interacts with chiral matter extremely efficiently – it allows us to force one molecular enantiomer to emit bright light at certain harmonic frequencies, while its mirror twin remains completely dark,’ explains study co-author David Ayuso, a member of Smirnova’s lab. ‘Which of the two enantiomers emits this bright light remains under our complete control.’ Furthermore, the team showed that the method’s sensitivity to distinguish opposite enantiomers can reach the ultimate efficiency limit.

To design the chiral light the researchers used mathematical modelling and tested how it interacts with chiral molecules including propylene oxide using computer simulations. While it remains to be tested in the real world, the team has proposed a lab setup to generate chiral light using existing laser technology by fusing two converging laser beams that possess light waves of two different frequencies. Tuning the phase shift between the different frequencies would control the handedness of the light and thus select which type of molecules it strongly interacts with.

‘The ability to elicit a selective response for chiral molecules is highly sought after because it allows us to distinguish the enantiomers which can have very different biological and pharmaceutical functions,’ says Jörg Goette, who investigates optical chirality at the University of Glasgow, UK. ‘This is a very exciting and promising idea and I look forward to seeing it implemented in an experiment.’