Smallest ever molecular thermometers made from DNA

The smallest ever molecular thermometers have been made by researchers in Canada using fragments of DNA that slowly unfold to release fluorescent molecules. The DNA thermometers are capable of extraordinary sensitivity, and the team behind them say they could be used to track minute temperature changes within cells or nanodevices. 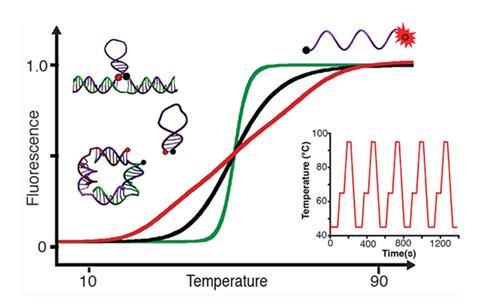 ‘We synthesise the thermometer the same way we synthesise DNA for PCR applications: using a DNA synthesiser and phosphoramidite chemistry,’ says Alexis Vallée-Bélisle, who developed the nanoscale devices with colleagues at the University of Montreal. ‘The DNA thermometers self-assemble but their structures are temperature sensitive.’ As the temperature increases the folded structure becomes unstable and unfolds. The thermometers contain fluorophores which are released during this process, so the temperature can be linked to an easily detectable optical signal.

The DNA can be ‘programmed’ using stabilisers to unfold at different rates, which makes the thermometers more or less sensitive. The team were able to create very sensitive temperature probes that unfolded and released a large shot of fluorophores over a temperature change of just 0.05°C. ‘Alternatively, we can also program our thermometer so that it has an extended dynamic range [and] unfolds over a large change in temperature, for example 50 degrees,’ says Vallée-Bélisle.

The thermometers could be useful for several research applications, including taking the temperature of different parts of cells or very small structures. Vallée-Bélisle’s team is currently using them to measure the temperature around cell’s nanomotors and nanomachines to see if they overheat when running.

Seiichi Uchiyama from the University of Tokyo, Japan, agrees the thermometers could have similar applications to polymer-based molecular thermometers his own team have developed in recent years, which they have used to measure intracellular temperatures. ‘I think the important thing is that DNA is a familiar molecule for the biologists who want to perform cellular thermometry,’ he says.

He adds, however, that there may be obstacles to using DNA-based devices in biological systems. ‘The DNA thermometers could easily interact with the endogenous biomolecules, which might interfere with their function,’ he says. ‘If the DNA thermometer gets more reliable [and the authors can] demonstrate real applications, a lot of biologists will think of using DNA thermometers in their own research.’

‘While molecular thermometers based on synthetic polymers and small molecules are well-established, it is important to widen the structural base of such devices,’ says A Prasanna de Silva at the school of chemistry and chemical engineering at Queen’s University Belfast, UK. ‘Therefore it is good to see DNA-based versions appearing. When compared to older studies with simple stem-loop configurations, the work by Gareau et al now brings a ready adjustability in terms of the sensitive temperature range and dynamic range. The application of the technique to PCR wells is a good demonstration, though it would be better if future experiments were to tackle far smaller spaces as some of the synthetic polymer thermometers have done.’