Malacidins have a novel mode of action and can kill MRSA

A new class of antibiotics – named malacidins – has been discovered by researchers genetically screening microbes from crowdsourced soil samples.

The discovery came from a citizen science project – Drugs from dirt – started by Sean Brady of the Rockefeller University, US. The project asked people to send in soil so that the DNA from microbes could be extracted and sequenced.

Brady’s team was looking for genes that code for calcium-dependent antibiotics, a small family of cyclic peptides that require calcium for their activity. They used PCR primers that latch onto a common biosynthetic gene to identify variants of this gene within soils. This led to them finding an entire gene cluster associated with the gene variant of interest that encoded for a new calcium-dependent antibiotic peptide family.

‘The [antibiotics] only gain their 3D shape in the presence of calcium and this allows them to then bind their target. We like this feature because it means the antibiotic is not “on” all the time,’ says Brady. ‘This might be a way of reducing resistance.’ 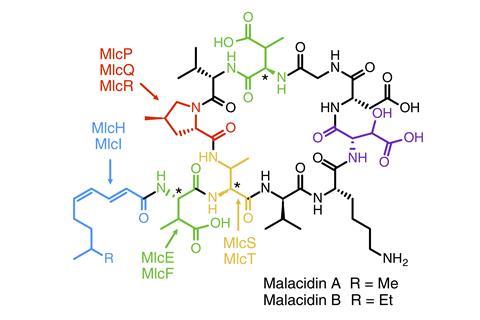 Malacidins are a new class of calcium-dependent antibiotics

Although calcium-dependent, the structure and mode of action of malacidins are unlike other antibiotics in this family. ‘[Malacidin] binds to a late stage cell wall intermediate and so shuts down cell wall biosynthesis, much the same way vancomycin – the famous antibiotic of last resort – works,’ says Brady.

When they implanted the gene cluster into Streptomyces bacteria, the cells produced two new antibiotics, which were found to be active against Gram-positive bacteria, including multidrug-resistant pathogens. One (malacidin A) successfully sterilised a wound infected by MRSA in a rat model. It showed no toxicity to mammalian cells.

‘We think the different mode of action is really exciting. It suggests that there are even more of them out there,’ says Brady. Ten per cent of soils had a DNA sequence that looked like it was related to this group. ‘Maybe we are not in such dire straits with antibiotics. There is evidence to suggest a large untapped reservoir of antibiotics is out there in the environment,’ Brady adds.

Malacidin’s mode of action also means resistance is less likely to develop, as it works by tying up the supply of a bacterium’s cell wall building blocks rather than targeting a key enzyme that could mutate.

Bob Hancock, a microbiologist at the University of British Columbia in Canada, says the method the team used to produce the antibiotics is ‘really blue-printable’ and could be used to make a lot of new antimicrobial compounds. ‘That would give us new chemical territory in which to go to discover antibiotics,’ he says.