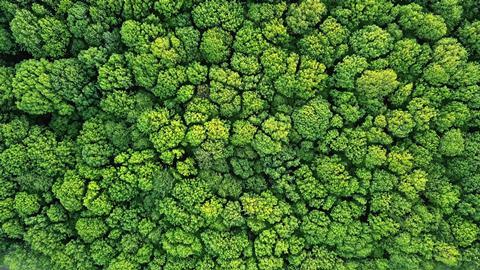 ‘Since I work on rubisco I’m always giving talks saying that it is the most abundant protein on Earth. Sometimes my audience will ask “Are you really sure?” I can now say “Yes I am”.’ This is how Manajit Hayer-Hartl from the Max Planck Institute of Biochemistry, Germany sums up her thoughts on a new analysis that the global abundance of plants’ carbon dioxide converting enzyme is an order of magnitude higher than thought.

Rubisco – its full name is ribulose-1,5-bisphosphate carboxylase/oxygenase – is a carbon-fixing enzyme found in all photosynthetic organisms. ‘More than 90% of the organic carbon on the planet in form of biomass is the product of the action of rubisco,’ says Yinon Bar-on from the Weizmann Institute of Science in Israel, who carried out the analysis along with Ron Milo.

40 years ago, biochemist John Ellis declared that rubisco was Earth’s most abundant protein. But it turns out that his back-of-an-envelope calculations were off by an order of magnitude. Instead of just 0.04 billion tonnes, plants and marine organisms actually contain 0.7 billion tonnes of rubisco.

To estimate terrestrial rubisco, which accounts for 90% of the total, Bar-on and Milo calculated global leaf mass. Leaves are the only rubisco-containing plant parts. By combining data from field studies and remote sensing, the team also accounted for different plant species containing different quantities of rubisco. Rubisco calculations for the world’s oceans came from biomass estimates for marine autotrophs, such as algae and cyanobacteria.

The massive difference between Ellis’ and the Weizmann team’s estimate stems from a misconception about rubisco’s efficiency, says Bar-on. ‘Ellis divided [the annual global carbon fixation rate] by the maximum rate at which rubisco is working in the lab – from that you can get an estimate for how much rubisco there is. The main reason that his number was much lower than ours is that he used a much higher rate for rubisco.’

‘Any rubisco can be as efficient in nature as it is in vitro,’ says Hayer-Hartl. But lab studies have recorded rubisco’s efficiency at 25°C in full light and high carbon dioxide levels. However, conditions in nature vary as, for instance, not every leaf receives full sunlight all of the time.

Since rubisco’s previous estimate was so far off the mark, Bar-on wonders if there might be another even more abundant protein. ‘Because most of the biomass on the planet is plants, a main candidate for the most abundant protein would be something that’s abundant in all plant tissues, not just in leaves like rubisco.’