The first human clinical trials of a cancer treatment using immune cells edited with Crispr–Cas9 gene editing technology have shown that the modified cells are safe and long-lasting. US researchers used Crispr together with viral gene modification to target patients’ T cells at their tumours, and found that the edited cells persisted in the patients for up to nine months.

However, while there were no serious adverse effects in the three patients studied by the University of Pennsylvania and Stanford University scientists, the best responses only kept cancers stable. Simon Lacey from the University of Pennsylvania tells Chemistry World that this is mainly because the study used early Crispr–Cas9 cell editing and manufacturing technology. ‘We expect that we and other investigators will build upon these concepts to design cell therapies that show higher efficacy,’ he says.

As with existing CAR–T therapy, the researchers first removed T cells from patients before modifying the cells. The scientists then infused the gene-edited cells back into the patients. 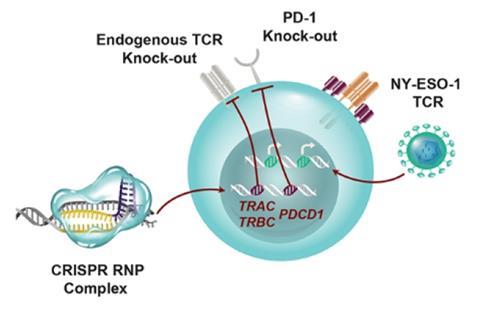 Scientists have knocked out three native genes in TCR using Crispr, and added another encoding a receptor that targets tumours.

Most of the modifications involved T cell receptors (TCRs). These are cell-surface proteins that recognise antigens from harmful cells, including cancerous ones. The researchers used a virus to introduce a TCR that recognises an antigen called NY-ESO-1, which is expressed by tumours, thus redirecting the T cells to kill tumour cells.

But a problem can arise because TCRs are made from two protein chains – α and β. If the cell’s natural TCR protein chains are present, they can dimerise with one of the NY-ESO-1 TCR chains, hampering the antigen recognition ability of the resulting TCR. The team therefore used Crispr–Cas9 to knock out both the natural TCR chain genes.

The team also knocked out the gene for the PD-1 receptor protein, a well-known immune checkpoint. When a ligand molecule binds to this receptor, it sends a message for T cells to reduce the intensity with which they kill target cells. Tumours often have such ligand molecules on their surfaces. ‘Knocking out the PD-1 gene should remove this brake,’ Lacey explains.

While the researchers saw all edits in patients’ modified T cells, knocking out the gene for the natural β TCR chain occurred with relatively low efficiency. Lacey admits that this was possibly a contributing factor to the treatment’s failure to reverse cancer progression. ‘Now in 2020 we and others in the field have achieved much higher levels of editing in our manufacturing processes,’ he says. ‘When these reach the clinic we will see.’

Astero Klampatsa from the Institute of Cancer Research in London, UK, calls the work a ‘milestone’. ‘It shows the ability of Cripsr–Cas9 on the clinical scale,’ she says. ‘However, whether this can be really used clinically, and what the anti-tumour effects will be with this type of engineered T cell remains to be seen. More patients are needed.’

‘It is encouraging to notice that these three patients did not show rejection of Cas9 edited cells,’ says Qianxin Wu, from the Wellcome Sanger Institute in Hinxton, UK. ‘The capability of simultaneously editing multiple genes really shows the great potential of Crispr technology in engineered cell therapy.’