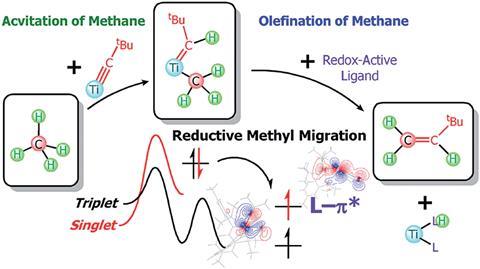 Researchers in the US and South Korea have developed way to convert methane into alkenes at room temperature. Such a process could one day be used to generate useful chemical feedstocks while reducing the amount of energy wasted by burning methane.

‘Current technology to convert methane to more value-added materials like olefins and hydrogen require vast amounts of energy because of the high temperatures required,’ explains Daniel Mindiola from the University of Pennsylvania, US, who led the project. ‘This technology could avoid burning fossil fuels to convert methane to more useful materials because it occurs at room temperature,’ he adds.

Mindiola’s team had previously used a titanium complex containing a highly reactive metal–carbon triple bond to activate methane. They have now shown that a carbon–carbon bond forming reaction between the resulting methyl and alkylidene  fragments can be promoted by the addition of redox-active ligands. By accepting an electron from the alkylidene group, the ligands lower the barrier to the bond-forming step and act as a trap for the hydrogen atom produced during the alkene elimination. This reduces the energy required for the reaction to take place. 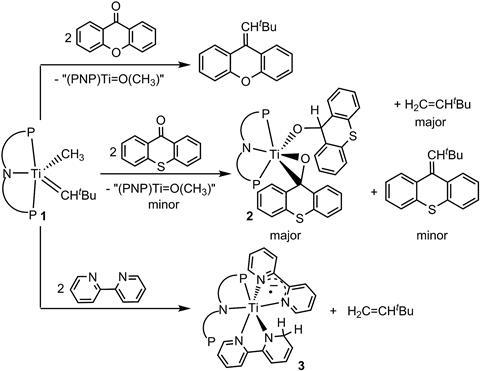 Exogenous redox-active ligands, such as thioxanthone and 2,2′-bipyridine, play two important roles: (i) they accept an electron from the Ti-alkylidene fragment to allow the methyl to approach the alkylidene and (ii) they serve as traps of a hydrogen atom resulting from olefin elimination

‘Methane, a primary component of natural gas, and a major byproduct of oil operations, is often flared off and wasted, despite its considerable energy content,’ explains Peter Wolczanski an expert in organometallic chemistry based at Cornell University in Ithaca, US, who was not involved in the work. ‘As a gas, it is difficult to ship economically. Hence its conversion to a useful liquid material … is quite desirable,’ he adds.

Wolczanski notes that although the reaction is stoichiometric, it is an ‘important variant on previous methane functionalisations’, and believes that the new work is a ‘crucial example’ of the steps required for a future catalytic process for the production of alkenes from methane.

Indeed Mindiola and his team are already looking to address the issue of stoichiometry: ‘Obviously for us, we are now looking at how to make this process catalytic, but also applying similar strategies to systems that are known to convert methane to olefins but at much higher temperatures,’ he says.