Earlier this year, Keele University began a pioneering project to pump 20% hydrogen into its own campus gas network – part of an initiative to show how hydrocarbons could be removed from the UK’s heating grid. The work, temporarily paused during the current pandemic, has shown hydrogen can be added safely. Replicated across the grid, it could avoid 6 million tonnes of carbon dioxide annually, comparable to taking 2.5 million cars off the road. 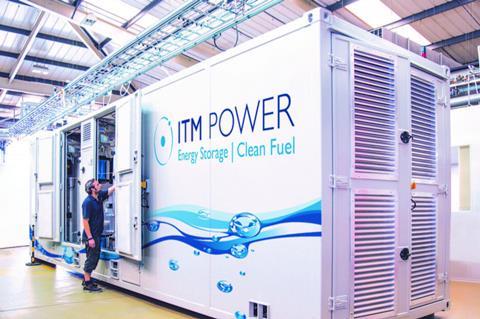 ITM Power’s electrolyser will soon be manufactured in the world’s largest factory of its kind in Sheffield, UK

Keele’s hydrogen is being produced by electrolysis of water. When renewables are used to split water, the production of hydrogen is emissions free. But currently electrolysis is a more expensive way of producing hydrogen than methane reformation – commonly used in industry. There are two technology options: steam or autothermal reforming, both of which require carbon capture and storage (CCS) to make them low carbon. In steam reformation, methane reacts with steam to produce hydrogen and carbon monoxide; the carbon monoxide and steam then react to produce carbon dioxide and more hydrogen. A further step removes impurities.

Chris Manson-Whitton at Progressive Energy, which has been working on the Keele project, says autothermal reformation, which uses a pure stream of oxygen to produce carbon monoxide and hydrogen, is better suited to CCS as it produces a clean stream of carbon dioxide. The UK’s Committee on Climate Change envisages this so-called blue hydrogen as the route to establish a hydrogen infrastructure on the road to net zero.

Global prices for hydrogen production from renewables range from $3.00–$7.50/kg (£2.45–£6.10/kg), compared with $1.50–$2.90/kg with gas and CCS, according to figures produced last year by the International Energy Agency (IEA). Researchers in Germany calculate that renewable hydrogen will be competitive with industrial supplies made from fossil fuels within the next 10 years in both Germany and the US – contingent on political decisions about subsidies and tax credits. The IEA estimates the price of renewables will fall 30% by 2030, so siting electrolysers in the most favourable renewable locations could bring the cost of hydrogen below $2.00/kg. ‘Down the line, it is possible to envisage a world where green hydrogen could even be harvested from areas of high solar intensity and shipped around the world,’ says Manson-Whitton.

Renewable energy accounts for around 80% of the cost of hydrogen produced by electrolysis. As prices continue to decrease, the spotlight increasingly falls on the cost of electrolysers.

Hydrogen energy equipment maker ITM Power is providing the electrolyser for Keele’s HyDeploy project. Chief executive Graham Cooley expects system prices will halve in the next five years thanks to increased manufacturing volumes, automation, growth in system size and continuous technology improvements. ITM has designed a next generation polymer electrolyte membrane (PEM) electrolyser, which will have a 5MW capacity. The stacks can be combined to create 100MW facilities – the scale needed if the UK is to meet its target of net zero emissions by 2050. 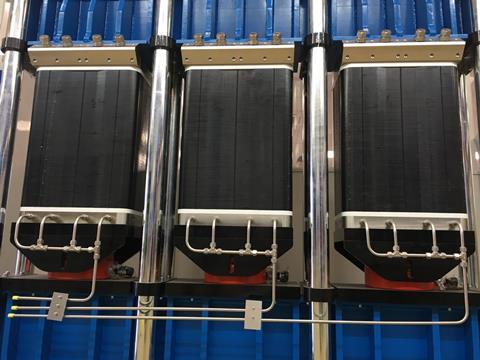 As part of a government funded project to accelerate the development of low carbon hydrogen, it has tested out new polymer electrolyte membranes with different chemistries and thicknesses. These, combined with bringing some processes in house, such as platinum coating of the electrodes’ surface and recycling waste, suggests stack costs could be cut by over 40%. A new electrolyser factory is on track to open by the end of the year.

The same project also looked at a range of grid and windfarm connection scenarios that would deliver hydrogen at a cost of between £4.16–£6.93/kg. That’s still more than three times the cost of hydrogen produced by methane reformation and CCS, however. 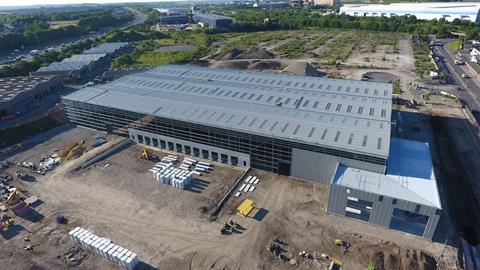 While ITM is staying tight-lipped about its advances in membrane chemistry, researchers around the world are looking at how material costs could be cut.

PEM electrolysers are more efficient than established alkaline water electrolysis systems, but more expensive because they rely on platinum at the cathode to produce hydrogen, iridium oxide at the anode and on an expensive proton selective polymer electrolyte membrane (PEM). A recent US analysis suggests membrane and catalysts contribute up to 40% of the cost of PEM electrolysers. ‘Iridium is one of the least abundant metals on the planet – we just don’t have enough of it to get electrolysis to the terawatt scale,’ says Alexandr Simonov at Australia’s Monash University.

Research has been focusing on reducing the amount of iridium required. Last year a team at the Ludwig Maximiliian University of Munich developed iridium oxide nanoparticles to create a highly active electrocatalyst. The nanoparticles produced eight times the hydrogen of a commercially available electrode, suggesting it is possible to cut iridium use by as much as 90%.

Simonov’s group is trying to eliminate iridium altogether, replacing it with more abundant metals like lead, that provide stability. ‘Combining lead with a more catalytically active element like cobalt – we got a very nicely functioning catalyst,’ he says. However, under the harsh conditions of electrolysis, all metals dissolve – electrodes lose their electrocatalytic activity and the performance of the electrolyser deteriorates substantially. ‘By providing a tiny concentration of our dissolved catalyst into the electrolyte water, the catalysts stop dissolving and electrolysis can continue essentially indefinitely. And the stability of such a catalytic system is unparalleled,’ asserts Simonov.

This system isn’t without its problems either, because eventually the membrane will become contaminated with metal ions. So the researchers are working on getting rid of the membrane, and hope to report on progress later this year.