US has destroyed last of its VX nerve agent stockpiles 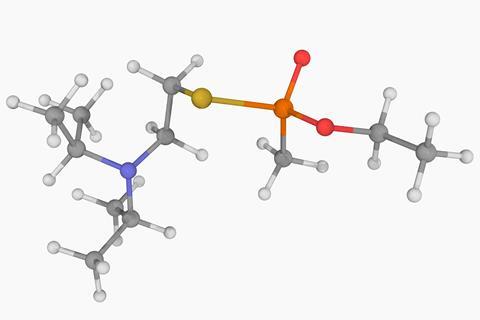 The chemical structure of VX, one of the deadliest poisons in existence

The US has destroyed the last of its 18,000 VX-filled rockets, meaning it has now eliminated 470 tonnes of VX, sarin and mustard gas – almost all that remains of the country’s chemical weapons stockpile that was once around 30,000 tonnes.

Venomous agent X, also known as VX, is an extremely toxic thiophosphonate. An oily, amber liquid, it is not very volatile. But it is readily absorbed through the skin and even a few milligrams can be fatal, leading to muscle paralysis and asphyxiation. In 2017, it was used to kill Kim Jong-nam, the estranged half-brother of North Korean leader Kim Jong-un.

The US produced most of its VX in the 1960s. Discovered in the 1950s, VX is more potent than sarin, the nerve agent that killed nearly 100 people in Syria in 2017. VX is banned under the Chemical Weapons Convention, and 98% of worldwide stockpiles have already been destroyed – though not always responsibly. In 2008, it came to light that the US had dumped 112 tonnes of VX in the form of filled projectiles and containers into the Atlantic Ocean in the late 1960s.

Since 2019, the Kentucky-based Blue Grass Chemical Agent-Destruction plant has been working on destroying chemical warfare agents stored for decades at a nearby army depot. Initially, the plan was to incinerate the materials, but after concern from residents and environmental groups, the nerve agents were hydrolysed in a concentrated basic solution instead. The resulting hydrolysate is tested to ensure the agents have been destroyed before being shipped to a chemical waste management facility for further processing.

While the country’s entire VX stockpile has now been eliminated, there are still 250 tonnes of other chemical agents left at the depot. Destroying the 51,000 sarin-filled rockets is next on the schedule, with destruction of all remaining chemical agents expected to be completed by 2023. Another plant in Colorado is working on destroying mustard agent stockpiles.