An explosive tale of serendipitous discovery 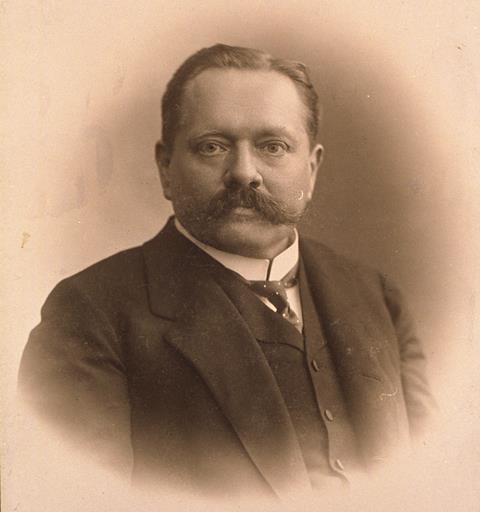 German chemist (1857–1928)
Curtius began his career studying both chemistry and music, and was a keen mountaineer

In 1857, Theodor Curtius was born in the Prussian Rhineland city of Duisburg, situated at the confluence of the Rhine and Ruhr rivers. Duisburg was then a major site of chemical industry in which the Curtius family held a large stake – Theodor’s grandfather Friedrich Wilhelm had founded a sulfuric acid factory in 1824, and his father Julius had established ultramarine pigment and alum works.

Theodor’s first love was music. But the sights and smells of his industrial heritage pervaded his early life1 and were to prove a more persistent inspiration. Initially studying both music and science at Liepzig University, his attention was taken by a task set by his mentor Hermann Kolbe – to ascertain the structure of hippuric acid. Curtius showed it can be made by condensing glycine with benzoic acid (inadvertently pioneering peptide synthesis at the same time when some of the glycine self-condensed). Having demonstrated his talent as an experimentalist, he secured Kolbe’s recommendation and moved to the University of Munich as assistant to Adolf von Baeyer, where he researched synthetic uses of glycine. His choice was made: Curtius embarked upon a career in chemistry, though he remained active as a pianist, singer and composer throughout his life.

Three years in Munich provided a rich training ground. Members of the local Stammtisch – a traditional gathering for drinking and discussion – included Eduard Buchner, Ludwig Claisen, William Henry Perkin Jr, and Adolf von Baeyer himself. It must have been a stimulating environment. During this time, Curtius managed to make ethyl diazoacetate by reacting the HCl salt of glycine acid ester with nitrous acid, a discovery that would bear fruit throughout his career.2 A legacy of quite another sort was the liver disease that would eventually take his life.

After moving to Erlangen, Curtius began to follow a trail in which he discovered a remarkable series of new nitrogen-containing compounds, each following in a logical progression. He was the first to prepare hydrazine (H2N–NH2) from diazoacetic acid,3 and filed patents for his production method in both Germany and the US. The availability of hydrazine salts then facilitated the earliest preparation of hydrazoic acid (HN3) which he reported in 1890 using a cyclic structure to represent the azide group.4

Curtius was the first person to make hydrazine, and then hydrazoic acid – which he represented as a cyclic structure

Hydrazoic acid is highly explosive and Curtius declared himself lucky to have been saved from misfortune during its handling – one of his students was less fortunate, losing an eye while preparing the dried material.5 This led Curtius to investigate the stability of hydrazoic acid salts as a safer alternative to direct synthesis of ‘free’ HN3. On the way he uncovered several extremely explosive examples, such as hydrazine azide (N5H5) and lead azide (Pb(N3)2) which was later used as a detonator during the first world war. Now the director of the Institute of Chemistry in Kiel, Curtius combined the strands of his discoveries to finally solve the problem of dangerous HN3 synthesis.

For a man whose earliest work had been in condensation chemistry and who had pioneered hydrazine synthesis, the first preparation of an acyl hydrazine (by condensing a carboxylic ester with H2N–NH2) was a natural step (figure 1). Reaction with nitrous acid (HNO2) led to the corresponding acyl azide, and substitution using sodium ethoxide then gave sodium azide (NaN3). Curtius now had a stable precursor to HN3 (by acidification) described as explosive ‘only by heating at a comparatively very high temperature’ (300°C). The reaction also produces a carboxylic ester that is recycled as the starting material for acyl hydrazine synthesis. Problem solved.

But Curtius didn’t stop there. He began to document the scope of the substitution reactions of his new acyl azides (also explosive – pity the brave students…) when something unexpected occurred. While acyl azides didn’t react with ethanol at room temperature, when heated a ‘stormy’ evolution of nitrogen was observed. The product obtained was not the simple carboxylic ester expected from a substitution reaction, but an ethyl carbamate, or urethane. Its structure was confirmed by independent synthesis as well as a degradation sequence of hydrolysis and decarboxylation, leading to the known HCl salt of aniline.6

Curtius emphasised the importance of the overall process as a synthetic route to amines (like aniline). Bearing in mind that the acyl hydrazine derives from a carboxylic acid, he had demonstrated a valuable method for multi-step interconversion of a carboxylic acid to a primary amine. He did not speculate upon the mechanism of the odd step in which a urethane is formed, however. Thatt fell to others, who suggested an isocyanate intermediate might be involved. That would account for the residual molecular formula following loss of N2 from acyl azide. The urethane then forms by addition of ethanol across the C=N bond of the isocyanate.7 In 1909, thermal decomposition of benzoyl azide to phenyl isocyanate and nitrogen gas was confirmed, and rearrangement of an acyl azide to an isocyanate was thereafter known as Curtius rearrangement (figure 2).8 Initially considered to involve a nitrene intermediate arising by loss of N2 from the azide, it was generally accepted during the 20th century that C⟶ N migration of the substituent is concerted with nitrogen loss, although evidence for the nitrene intermediate in photochemical variants has recently been suggested once more.

Initially the reaction was thought to proceed through a nitrene intermediate; later experiments point to a concerted mechanism

A powerful mountaineer as a young man and founder of the Kiel section of the Alpine Association, Curtius gave up climbing in the same year as reporting the reaction that bears his name. Some men are destined to climb mountains, and Theodor Curtius did so in life as in his work. He had long accepted the danger that accompanied each, but the time had come when he had explored enough.