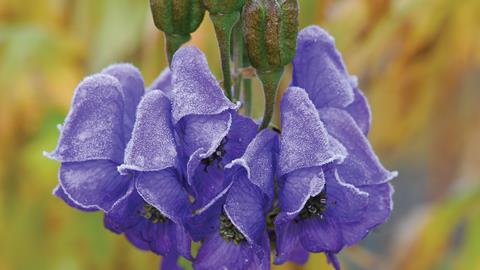 A plant based poison with a poetic past…

This week, a powerful poison that is said to have the power to transform werewolves and heal snake bites. Brian Clegg unpicks fiction from fact…

It’s not often that we are told about a chemical compound by a great poet, but in Ode on melancholy, John Keats remarks:

No, no, go not to Lethe, neither twist
Wolf’s-bane, tight-rooted, for its poisonous wine.

That ‘poisonous wine’ contains the potentially lethal compound aconitine, named for the plant genus Aconitum that flourishes across Europe. The plant has many alternative, mysterious sounding names: wolf’s bane, monkshood, mousebane and leopard’s bane are amongst its most common ones. The monkshood part simply refers to the flowers’ shape, though why such an odd collection of animals should be wary of it is unclear. 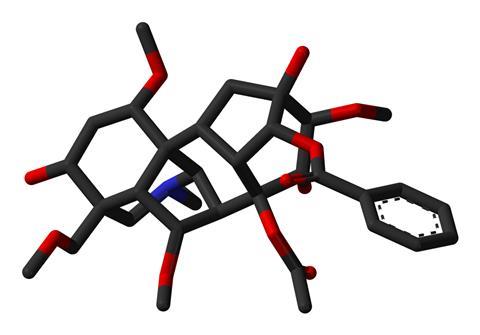 There are over 200 Aconitum species around the world, many producing alkaloid poisons. The compound aconitine itself is a contorted tangle of fused and bridged rings attached to an aromatic molecule, looking something like a failed attempt to make a 3D model of a cow out of drinking straws. Its chemical formula C34H47NO11 does not give a realistic feel for that tortured structure. With an ability to cross the blood-brain barrier, the poison interferes with the crucial sodium-ion signalling channels, rapidly taking effect after consumption. Its impact is felt in minutes and the poison can cause cardiac arrest or respiratory failure within an hour.

With plants as a readily available source, aconitine has long been a poison of choice, either consumed as a solid, chopped into food, or dissolved in alcohol, as it has limited solubility in water. Its use crops up in Ancient Greek writing, and it features both in fiction and reality throughout modern history. In Shakespeare’s Henry IV, the king advises Thomas of Clarence how to handle his mercurial brother, suggesting he only bother him when he is in a good mood so that the ‘united vessel of their blood’ shall ‘never leak, though it do work as strong/ As aconitum or rash gunpowder’. 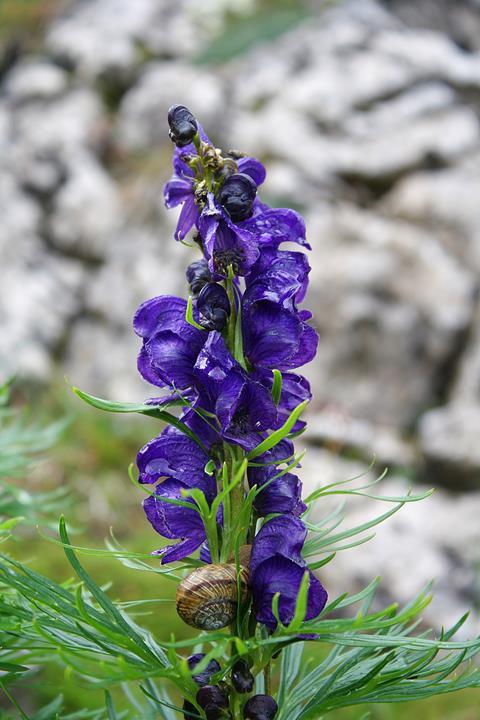 Perhaps more interesting than the straightforward poison role is the strange imagining that produces that name wolfsbane. The link of aconitine to werewolves – which again seems to date back to the Ancient Greeks – may be because some of the early symptoms of aconitine poisoning: they resemble the symptoms of rabies. In fantasy fiction, wolfsbane is often supposed to be either cause, or prevent, the transformation of a werewolf.

The Elizabethan herbalist Nicholas Culpeper, whose 1653 Complete herbal was the bible for British herbal treatments of his time, had mixed feelings about aconitine. From a modern viewpoint, Culpeper’s approach, littered with astrological guidance, may seem hopelessly unscientific, yet at the time he was probably more focussed on effective cures (and less on fees) than physicians who often made diagnoses without even seeing their patients and of whom he was bitterly critical.

Culpeper tells us that we have ‘many poisonous Aconites growing in the fields, of which we ought to be cautious: but there is a medicinal one kept in the shop; this is called Wholesome Aconite; Anthora, and Wholesome Wolf’sbane’. This ‘wholesome wolfsbane’, Aconitum anthora, or yellow monkshood, is common in the Alps and was grown at the time in UK gardens. Although the main plant contains alkaloids, the roots lack the poisonous presence of aconitine. Culpeper’s opinion: ‘It is said to be very serviceable against vegetable poisons. A decoction of the root is a good lotion to wash the parts bitten by venomous creatures but it is not much regarded at this time, and should be cautiously kept out of children’s way…’

Aconitine is a substance best avoided, from a plant that may look attractive – Aconitum variegatum has rather pretty purple flowers – but that is too risky to add to the garden. Wolfsbane may have turned up as a handy potion in Harry Potter, but for the real world, this alkaloid poison is well worth giving a miss.

Brian Clegg on aconitine, a poison with a poetic past. Next week, Neil Withers explores a royal ruby that isn’t:

I must disappoint the Black Prince, Henry V, Don Pedro the Cruel and Prince Abu Said: the Black Prince’s Ruby is not a ruby. It’s a wonderful red gemstone, to be sure, but it’s a spinel.

Neil introduces a classic of solid state chemistry, the spinel, next week. Until then, let us know if there’s any compound you would like to know more about by emailing chemistryworld@rsc.org, or on twitter @ChemistryWorld. I’m Ben Valsler, thanks for joining me.