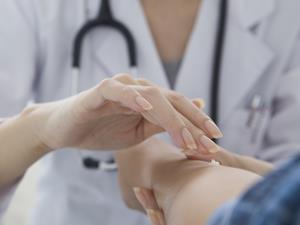 Cortisol, which may be more familiar from its name when used in medication: hydrocortisone, is a steroid which acts as a hormone – we’ll unpack those in a moment, but what we have here is a compact but complex organic compound of carbon, hydrogen and oxygen, containing four ring structures. We’re used to steroids as a dubious substance misused by the occasional bad athlete, but they form a large family of organic compounds, typified by a particular linked four ring structure – three with six carbons and one with five. Steroids are a small subset of the hormones, signalling compounds produced in an organism that typically control the actions of various organs. 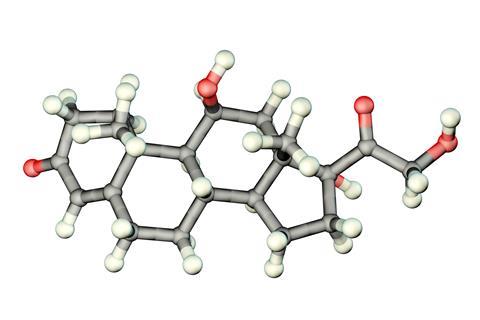 Cortisol was one of a number of compounds that were discovered in the 1930s by Edward Kendall, Tadeus Reichstein and Philip Hench, who won the Nobel prize in physiology or medicine for their discoveries in 1950. That dry-sounding statement of ‘discovery’ covers up a significant feat, made obvious when reading the transcript of Reichstein’s Nobel prize lecture, where we discover that the experimenters started with a tonne of ‘adrenals from cattle’ to produce 25 grams of concentrated extract to work on.

Reichstein also highlights the importance of a researcher being open-minded. He comments: ‘When I began my researches on adrenal extracts I believed that I was dealing with a hormone (or hormone mixture) that definitely did not represent a steroid… The assumption proved false.’ From the extract they isolated a total of 29 steroids of which only five were already known. And one of those newcomers was cortisol.

These steroids, with cortisol and the closely related cortisone amongst their number, originate in humans (and cows) in the outer layer or cortex of the adrenal glands, which perch on top of the kidneys. Cortisol has multiple functions in the body. I first came across it, as many others will have, in a cream as a treatment for eczema and dermatitis. This reflects the compound’s immunosuppressive function, reducing inflammation. But this is only the start of cortisol’s medical role. It’s also injected to reduce the powerful allergic reaction that is anaphylaxis (along with the simpler hormone epinephrine, better known in the UK as adrenaline), or to pacify dramatic joint inflammation like gout. Some take it orally in long-term treatments requiring steroids, often when there are problems with the adrenal or pituitary glands. 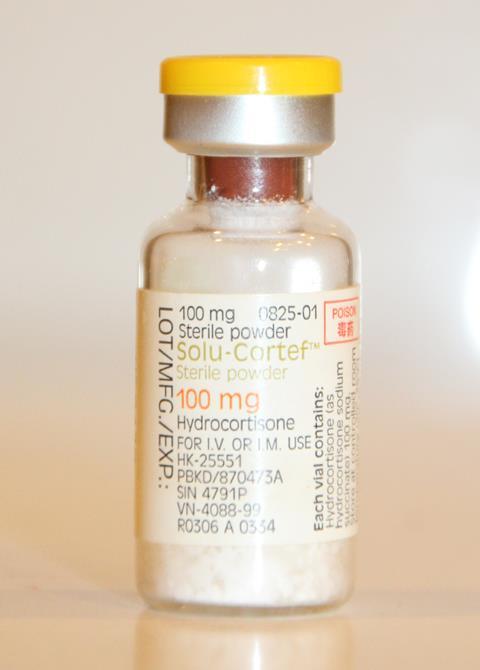 This medical cornucopia reflects just how many roles cortisol has within the body. It is released during stress (and potential injury) in part because it reacts directly and also makes epinephrine more effective in the muscle and liver-based process known as glycogenolysis, which is central to the fight or flight response. The result is that blood pressure and blood sugars rise, experienced as an energy boost, while the immune system is damped down to avoid immediate inflammatory over-reaction to any damage caused. At the same time it helps the metabolic process by increasing the ability of muscles to make use of amino acids. As a side effect, bone formation is suppressed, the salt and water balance in the body can change, and the stomach secretes more acid.

Working in combination with epinephrine, cortisol also has an effect on the brain, making it more likely to capture the memory of a sudden, dramatic event – so called ‘flashbulb memories’.This may be part of the whole stress reaction, enabling retention of particularly strong memories of dangerous situations to avoid in the future. This return to the brain makes for something of a circular action, as a part of the brain, the hypothalamus, kicks off cortisol production.

It’s a reflection of the complex chemical processes in a living organism that what we might just consider to be a constituent of a soothing cream turns out to be a sophisticated hormone, triggered in structures above the kidneys by signalling chemicals from the brain in response to stress. But however you look at cortisol, now on the World Health Organisation’s list of essential medicines, it is a compound to respect.

Brian Clegg, respecting the chemistry of cortisol. Next week, be careful what you’re brewing.

Ask a random person to tell you what they know about methanol and they’ll probably talk about the perils of homemade liquor, better known as moonshine. Get the process wrong and the methanol will make you go blind. This is unfortunate for a chemical of such huge importance.

Find out why in next week’s Chemistry in its Element. Until then, thank you for listening, I’m Meera Senthilingam.