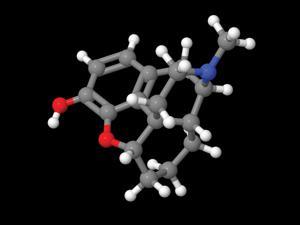 This week, a dangerous addiction with Nate Adams.

Desomorphine or dihydrodesoxymorphine is an opioid, like morphine or heroin. That means it is a powerful painkiller, but like morphine and heroin it is also highly addictive. It was originally synthesized in 1932 and patented in 1934 by American chemist Lyndon Frederick Small.

Small was financed by the then Division of Medical Sciences of the National Research Council to discover or ‘invent a drug which would do for medicine everything which the habit-forming drugs do, yet not cause the habit itself’. National governments and the League of Nations – the precursor to the United Nations – were worried about the increasing use of drugs of abuse in society. They wanted to reduce medical dependence on addictive drugs so that they could then suppress their manufacture. 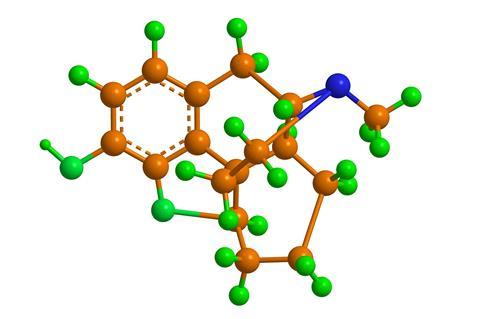 Inspired by the discovery of novocaine, a safer version of cocaine which didn’t display the same addictive properties, they wanted to side-step the addictive nature of morphine. Small’s method involved modifying the functional groups of the morphine molecule in the hope of decreasing undesirable addictive effects while increasing the pain-relieving effects. His work produced many research papers, and new promising leads including the drugs metopon and monoacetylmorphine as well as desomorphine.

Clinical studies of desomorphine showed that the drug was eight to 10 times more potent than morphine, requiring lower doses for pain relief, muscle-relaxation, sedation and euphoria, as well as decreasing the nausea and respiratory depression associated with the use of morphine. Although these were positive outcomes from the research, use of the drug also quickly leads to addiction – in fact it showed an increased potential for dependence compared with morphine. Desomorphine was briefly commercially produced by Roche in the 1940s under the trade name Permonid and was used for post-operative pain relief due to its quick onset and decreased respiratory depression, but was found to have a short shelf life and was removed from the market in 1952.

That might have been it for desomorphine, as these problems left little reason to invest and market such a product. But the story doesn’t end there. In recent years, desomorphine has emerged as a substitute for heroin in Russia.

You might have heard the street name of desomorphine – krokodil – supposedly named after the nasty effects it has on a user’s skin. I don’t recommend doing a google search - the pictures are awful. A side effect of the Russian government’s attempt to restrict the flow of heroin from Afghanistan lead to a massive increase in the street price of heroin, which rose to between £20-60 a dose. When a synthetic substitute is offered for only £2, the results can be catastrophic.

The chemicals required to make clandestine kitchen-grade desomorphine are readily available in Russia. Codeine, a painkiller related to morphine, can readily be bought over the counter at pharmacies, and the remaining reagents – including iodine, lighter fluid, petrol and matches – can easily be bought. The codeine is boiled in paint thinner and then the salt is precipitated out by adding hydrochloric acid. This is then dissolved in gasoline and mixed with iodine and red phosphorus from matchboxes. The resulting crude concoction may contain some desomorphine, but will also contain a large amount of dangerous contaminants, including heavy metals, iodine and phosphorus.

The side effects of krokodil injection include immediate damage to blood vessels, muscles, bone and eventual organ failure. Iodine can damage the thyroid and cause muscle atrophy. Phosphorus will damage cartilage. Other side effects include inflammation of the liver and kidneys as well as brain damage. Users quickly develop large abscesses and inflamed blood vessels - leading to gangrene and tissue death. It’s not pretty.

As with the highly addictive crystal methamphetamine, produced because of the readily available precursors in cold and flu medication, krokodil is an untended result of a number of factors combining. It’s an unhappy twist in the tale of a drug produced as a byproduct of research into non-addictive morphine substitutes.

Twists and turns indeed. Sheffield University’s Nate Adams there, with the medicinal street chemistry of desomorphine. Next week, another turn – of genders.

In 1970, marine biologist Stephen Blaber made an unsettling discovery on beaches around the British Isles. He had been collecting sea snails, known as dog whelks, to try and find out why they were disappearing from their normal range. Blaber examined female whelks and saw that something very strange was going on: they were sprouting male genitalia.

Discover why this was happening with Helen Scales in next week’s Chemistry in its Element. Until then, thanks for listening, I’m Meera Senthilingam.