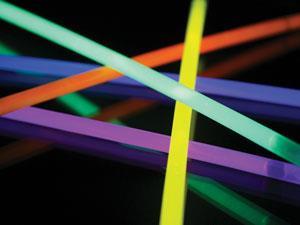 Nature has a range of ways to create bioluminescence. Not to be outdone, chemists create their own glow with diphenyl oxalate.

Visually striking luminescence is a phenomenon found throughout the natural world. Termed “bioluminescence” it is a frequent and dramatic characteristic of deep-sea marine organisms, microorganisms and terrestrial invertebrates. Bioluminescence is typically exemplified by the green fluorescent proteins of the crystal jellyfish, by the luciferase enzymes of the big dipper firefly and by the symbiotic bacterium Aliivibrio fischeri. What makes this final example particularly extraordinary is that the bacteria are found inside a pouch located beneath the head of the Hawaiian bobtail squid, where its bioluminescence assists the squid to hunt at night in the shallow waters of the Pacific islands. 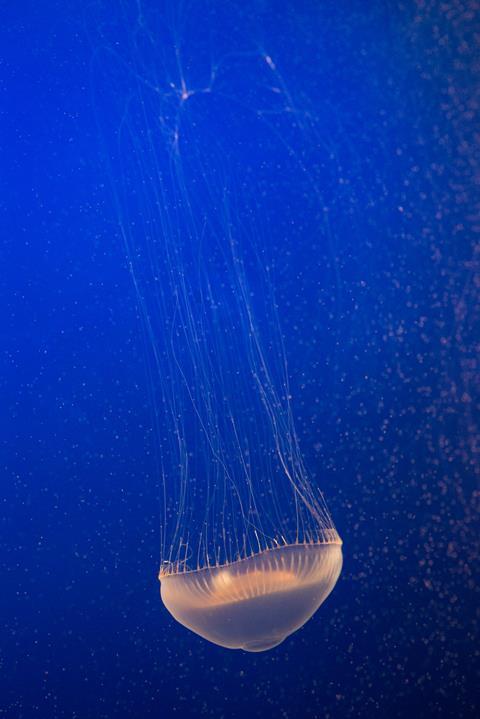 All of these examples of natural bioluminescent processes result from the excitation and fluorescence of small organic molecules by enzymes. Not to be outdone by nature, scientists achieve similar illumination processes in the laboratory using a combination of organic chemistry and photophysics.

This process is called chemiluminescence: the process by which light is emitted as the direct result of a chemical reaction, requiring no light bulb and no battery whilst giving off no heat. This is typically achieved by exciting a fluorescent molecule from its electronic ground-state configuration to a higher excited vibronic state using energy released by a chemical reaction. The excited molecule will spontaneously relax back to its more stable ground state configuration with the emission of a photon of light. It is this emission of light that we observe with the human eye.

In chemiluminescence, in place of using an enzyme to induce the molecular excitation, we use instead small organic molecules. Such a molecule needs to be completely inert until the point at which an external stimulus is applied, causing the molecule to react and release energy in a controlled and safe manner.

Diphenyl oxalate-induced chemiluminescence is now frequently used in scuba diving and camping equipment, as well as being widely used in nighttime medical and military rescue operations

Whilst not necessarily familiar with their chemistries, you have undoubtedly seen such molecules in use, as they are responsible for the glow sticks you may find at fairgrounds and in nightclubs. The molecule diphenyl oxalate is responsible for initiating the chain of chemical reactions that results in a glow stick’s chemiluminescence. 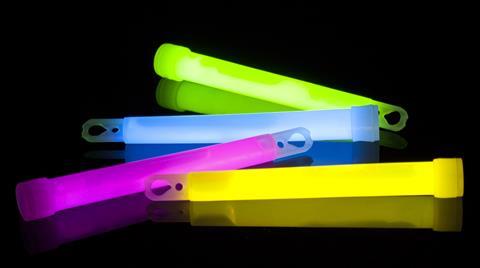 If you were to cut an unused glow stick open (and I don’t recommend it), you would find it contains a small glass tube, floating in a liquid. Inside the tube is a mixture of diphenyl oxalate and a colored fluorescent dye. The liquid outside is a solution of aqueous hydrogen peroxide. When you bend the glow stick and break the inner container, the two solutions mix and a chemical reaction initiates between the hydrogen peroxide and diphenyl oxalate ester producing two molecules of phenol and one molecule of a cyclic peroxyacid ester called 1,2-dioxetanedione. This is a high-energy molecule that spontaneously decomposes to form two molecules of carbon dioxide, releasing energy in the process. This energy is absorbed by the fluorescent dye, which excites it into a higher vibronic state. When it then relaxes to its ground state configuration, it releases a photon of light, which we observe as a coloured glow. The wavelength of the emitted photon is dependent on the chemical structure of the fluorescent dye. Therefore, different colors of glowstick result from simply changing the dye molecule in solution with the diphenyl oxalate. As there is only a limited concentration of diphenyl oxalate in the glowstick interior, the excitation reaction can only proceed until no more diphenyl oxalate remains, resulting in the glowstick fading over time.

Diphenyl oxalate-induced chemiluminescence has only been in existence for the past 30 years. However, during this period the commercialization of this non-thermal energy-releasing chemical decomposition reaction has been extensive. From the better-known applications of chemiluminescence in fancy dress outfits and in nightclubs as quirky fashion accessories, diphenyl oxalate-induced chemiluminescence is now frequently used in scuba diving and camping equipment, as well as being widely used in nighttime medical and military rescue operations around the world.

From glowsticks to global rescues. That was Stephen Wallace from the Medical Research Council, with the chemistry of diphenyl oxalate. Now there’s more to next week’s compound than its name might suggest.

There are some compounds that are blest with evocative names. Admittedly, you could call naphthalene ‘bicyclo[4.4.0]deca-1,3,5,7,9-pentene’ if you wanted to be pedantic (or a chemist), but naphthalene gives us a double dose of meaning that isn’t there in the systematic name.

Brian Clegg reveals this double meaning in next week’s Chemistry in its Element. Until then, thank you for listening, I’m Meera Senthilingam.