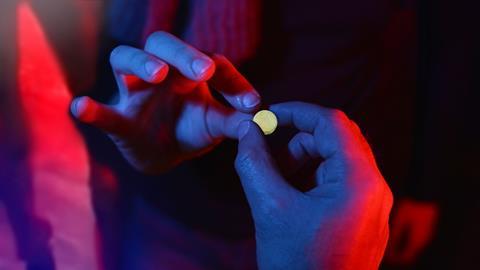 The drug that fuelled rave culture may yet be a treatment for PTSD. Hayley Simon introduces MDMA

This week, Hayley Simon stimulates our minds – chemically, of course. 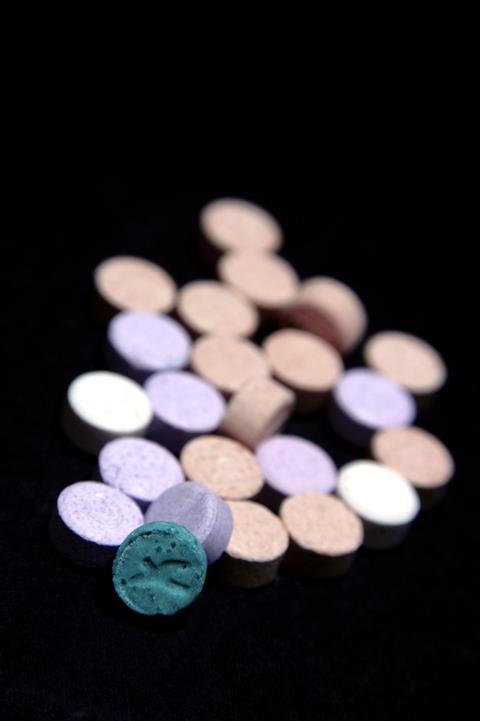 In the 1980s, a new psychoactive drug burst onto the market. Known as Ecstasy, or E, this small pill was an instant hit on the clubbing scene. The active ingredient in ecstasy is 3,4-methylenedioxy-N-methylamphetamine, better known as MDMA.

MDMA was first synthesised by Merck in 1912, and was patented two years later. From there it fell to the annals of history, until the 1970s when Alexander Shulgin and other young American chemists began to synthesise and ingest it. As it was a stimulant that also invoked feelings of euphoria, MDMA soon filtered out of the lab and onto the streets.

The synthesis of MDMA usually begins with the precursor safrole – an oily liquid extracted from the root-bark or fruit of the Sassafras tree. From this common starting point, there are several synthetic routes to reach the final molecule. Around 1.5 to 3 hours after ingestion, MDMA reaches peak concentrations in the blood. Users typically experience a high, which lasts for a few hours.  Inside the brain, MDMA acts on a number of receptors that are responsible for releasing three neurotransmitters; serotonin (5-hydroxytryptamine), dopamine and noradrenaline. MDMA primarily affects serotonin receptors, causing the chemical to be released. Elevated levels of serotonin lead to the characteristic emotions of euphoria and empathy that have fuelled rave culture for the past thirty years.

But like all drugs, MDMA can have harmful effects too. Around the same time as Shulgin began to experiment with the molecule’s psychoactive influence, the US military conducted an investigation into its toxic effects in animals. They quantified its toxicity using a measure called the LD50, or median lethal dose. This is the amount of substance required to kill half of the tested subjects. In rats, the LD50 of MDMA is 49 mg/kg, which is about the same toxicity as nicotine.

By 1977, ecstasy had begun to enter the mass market. Aware of the potential dangers of this new craze, the British government approved an amendment to the Misuse of Drugs Act, classifying MDMA as a Class A drug. This made it illegal to possess, sell or give away ecstasy; a status that remains in place to this day.

Side effects of MDMA can range from the mild, such as jaw clenching and dry mouth, to the severe, including renal failure or death. The first recorded death attributed to MDMA occurred in 1987, and since then many more have been linked to the drug. In the 16 year period between 1996 and 2012, there were 577 deaths in England and Wales listing MDMA on the death certificate. Often fatalities do not occur as a result of an overdose – the lethal dose is around forty times higher than the recreational dose. Instead, most deaths are caused by overheating, or an underlying medical condition. When compared to other Class A drugs, the number of MDMA fatalities is small. For example, in England and Wales in 2013, 43 deaths listed MDMA on the death certificate, while 765 were attributed to heroin or morphine.

With such a small number of deaths, it is easy to think that it will never happen to you. Recently, a friend of mine was on a night out in London. He had taken a gram of MDMA, and this was not his first experience of the drug. Soon after he arrived at the club, he began to feel ill and went to the toilet. That was the last time anyone saw him. By morning he had passed away, just two days before his 22nd birthday. He was a genuinely lovely guy, a loyal friend and talented musician. He’d recently started a new job, moved out of his parents’ house, and things were going well with his new girlfriend. He will be sorely missed by everyone who knew him.

Despite the dangers of MDMA, like any drug, there is a balance between benefits and harm. Recent research indicates that MDMA could be a promising new therapeutic treatment for post-traumatic stress disorder, or PTSD. In a clinical trial, the drug was combined with traditional psychotherapy to treat cases of treatment-resistant PTSD. Though the study was small, with only 19 participants, the results suggest that MDMA improves symptoms for chronic PTSD sufferers. MDMA achieves this by increasing the sufferers’ access to their emotionally upsetting memories, while at the same time lessening the emotional response. The overall effect is to improve the usefulness of the therapy session.

From a chemist’s point of view, MDMA does not look like a complicated molecule. But behind its relatively simple structure is a complex sociological history. Over the past few decades, MDMA has brought ecstasy to many, and to others, despair. MDMA’s popularity is widespread, but that it is not altogether unsurprising. After all, who doesn’t want to feel happy?

Chemistry World’s Hayley Simon there, with the mind altering, yet potentially therapeutic chemistry of MDMA. Next week, things get explosive.

Explosives are substances that produce large quantities of hot gas in a very rapid, violent, usually exothermic reaction. TATP is different, as not much heat is produced, but a lot of gas is formed; it is what is known as an entropy-driven explosive.

Simon Cotton explains why in next week’s Chemistry in its Element. Until then, thank you for listening, I’m Meera Senthilingam.