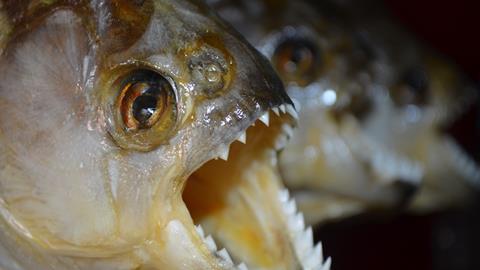 When you need to get your glassware extremely clean, you need a cleaning solution with real ‘bite’

If cleanliness is next to godliness, then most of us are downright ungodly. As long as it’s not smelly and won’t kill us, that’s usually good enough. If you disagree, I need only point out that 50% of the cells in your body are alien organisms that got there because, frankly, you don’t really care what filth you come into contact with. 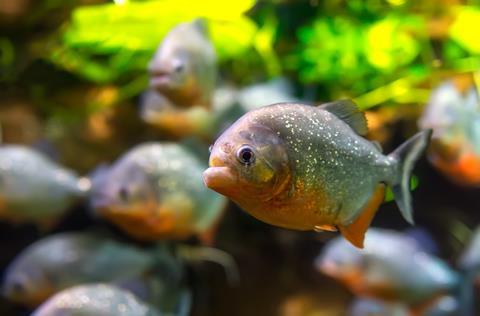 Good chemists, on the other hand, have higher standards. For them a smear on their test-tube is a smear on their reputation. They are all too aware that a purity of 99.9% is just another way of describing an impure substance. And purity is the measure by which they will be judged. Thus they have developed a whole range of solutions for cleaning their glassware.

But few of these are designed with the intention of being soft and gentle on the hands. As its name suggests, one example – piranha solution – is a cleaning solution with a bite.

It might be named for the fact that it ‘eats’ all organic matter it comes into contact with. Or perhaps it’s because of its propensity to boil vigorously when it reacts with organic matter, or even while it is being prepared, causing it to resemble the piranha feeding frenzies depicted in horror movies. Either scenario should serve as a warning to anyone who might dare to use it.

These warnings are not just hyperbole. This extract from a report of an accident at a lab in the United States holds testimony:

‘A row of glass cabinets along one wall were peppered with holes from the shrapnel. A glass drainpipe on the wall opposite the fume cupboard (about 8–10 m away) was cracked in the middle. It is believed that it wasn’t caused by shrapnel, but by the compression wave of the blast. The student had been wearing rubber gloves, a thick sweater, a lab coat, an apron and safety glasses at the time of the explosion. The fume cupboard sash was partially down and absorbed some of the blast preventing the student from catching all of it in the face. The arm holding the sinter funnel received most of the damage – the glove was completely flayed and their arm had several hundred small bits of glass embedded in it as well as several fairly large lacerations. They had a wound about 20 mm in diameter just next to their jugular vein. At least one piece of glass went through their cheek. The student (and everything else) was also covered with hydrogen peroxide and sulfuric acid; something that wasn’t realized until much later because those first on the scene had no way of knowing what had happened. The student spent the next six hours having tiny bits of glass picked out of their arm, neck and face.’

Piranha solution works by combining the dehydrating power of concentrated sulfuric acid and the oxidising power of hydrogen peroxide. 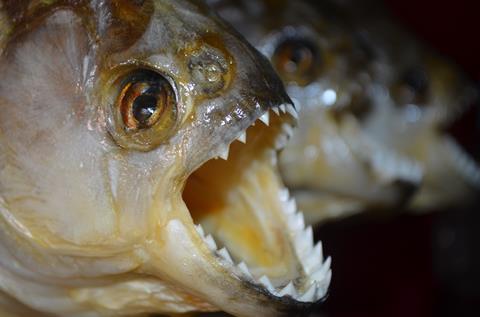 The former should be familiar to any school child with a chemistry teacher worth their salt. They should have seen their teacher add concentrated acid to a beaker containing sugar . After a short while the sugar will start to turn brown, and steam will start rising from the beaker. Eventually, the reaction will accelerate and the sugar will expand into a tower of black carbon, accompanied by a pleasant aroma of over-cooked cake. In this reaction, the sugar, with formula C6H12O6, undergoes a dehydration reaction, losing atoms of hydrogen and oxygen in the ratio of 2:1 in the form of water, H2O. The role of the sulfuric acid is two-fold: its acidity catalyses the reaction, and being a hygroscopic substance, it combines with the water, releasing a great quantity of heat – meaning the reaction cannot go in the reverse direction, and can only proceed to completion.

This reaction would make sulfuric acid alone an unsatisfactory cleaning agent since it would leave all of one’s glassware caked in carbon. The role of the hydrogen peroxide (H2O2) is to get rid of this carbon, and it achieves this because it is an oxidising agent. It will readily give up one of its oxygens to the carbon, producing carbon dioxide. So if it were added to sugar along with concentrated sulfuric acid it would leave nothing in the beaker – even any water produced would evaporate as steam. However, adding it to such a large amount of organic substance is unwise, as it would likely react explosively. But to remove the last bits of residue that will only depart reluctantly, the mixture of sulfuric acid and hydrogen peroxide is perfect.

Glass is not the only thing it cleans. Piranha solution is also used in the electronics industry to clean the photoresist residue off silicon wafers during the manufacture of printed circuit boards. It’s possible the device you’re listening to this podcast on was treated with it.

So next time you have a wash, bear in mind the poor chemists who have to go one step further with their cleaning product, braving the threat of ferocious waters that they might achieve the cleanliness that the rest of us can only dream of.

That was Sam Tracey on the aggressive cleaning product piranha solution. Next week, Michael Freemantle explains how he tackles an excruciating problem

Over the years, I have learnt that it is always important to have a packet of indometacin capsules available in my medicine cabinet and to carry a packet with me when I travel. As soon as I notice the symptoms of gout, I start taking the drug in the doses recommended by my doctor, and continue until the symptoms disappear.

So gout sufferers, and it’s thought there are more than half a million in the UK alone, will want to join us for the next chemistry in its element podcast. Until then, let us know if there are any compounds you would like to hear about – email chemistryworld@rsc.org or tweet @chemistryworld. Thanks for listening, I’m Ben Valsler.