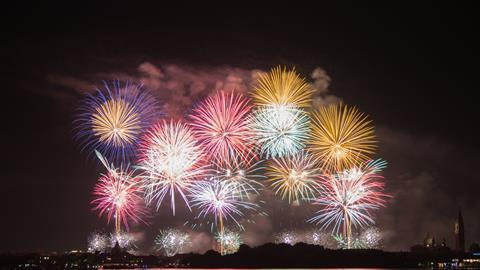 Fireworks, explosives, spacecraft – Neil Withers explains why potassium chlorate is the sort of compound that draws attention to chemistry

This week, prepare for some bangs in many ways, shapes and forms. Exploding this chemistry into your ears, it's Neil Withers.

Play a game of word association with potassium chlorate and you will quickly fall upon some fabulous ones, in the mind of a young child at least. The kind that made many of us turn our attention to chemistry as young whippersnappers. Fireworks, explosives, spacecrafts just to give you a taster. What bliss! Ok, so maybe it still works on some adults - especially immature ones like me, I'm a little ashamed to admit. 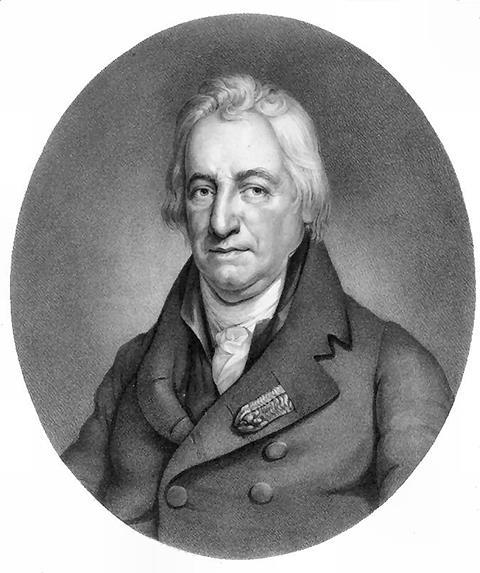 But how did the thrilling story of this chemical begin? To find that out we need to turn our attention back to the end of the 18th century, when French chemist Claude Louis Berthollet first discovered potassium chlorate. His discovery ignited a spark under the fireworks industry, allowing their beautiful colours to be properly seen for the first time. This was all thanks to its powerful oxidising abilities. Potassium chlorate, when heated, decomposes to produce oxygen. This helped fuel the flame of the lit firework, making it hotter than ever before. The extra heat can excite electrons in the colour-producing chemicals included in the firework mix, and thus produce beautiful colours. Prior to this, fireworks were mostly a dull gold in colour, as this is the colour generated when gunpowder burns.

Sadly potassium chlorate's role in firework chemistry is pretty much over today, due to safety reasons. It turns out it is just too reactive. In particular, once mixed with sulfur it becomes dangerously sensitive to friction. And mixing the two has been banned in the UK since the late 19th century. Potassium perchlorate is a more stable analogue and is now widely used in the fireworks industry.

Another area where potassium chlorate used to excel, but now is rarely used due to safety concerns, is in explosives. Again its role here was as an oxidiser, to fuel the power of the explosion. In the First World War mixtures of potassium chlorate and plasticizers, like wax, were the most frequently used plastic or putty explosives. 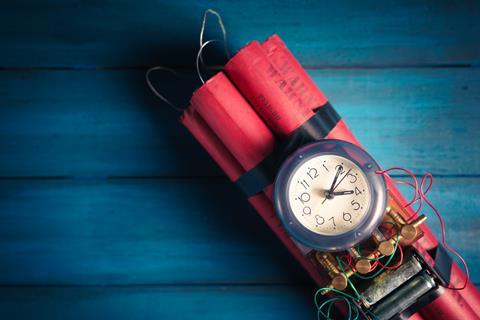 It does however still have an 'explosive' role in the caps used in toy cap guns, where the amount used is so very small that it isn't of a safety concern. Toy caps contain a mixture of sand, red phosphorus and potassium chlorate. When the gun's hammer hits the sand in the cap, sufficient friction is produced to ignite the red phosphorus. In turn, the heat from the burning fuel triggers the decomposition of the potassium chlorate. And the resulting oxygen released further assists the burning of the red phosphorus. And the result is a rather pleasing BANG.

Safety match heads also contain minuscule amounts of potassium chlorate, yet again as an oxidiser. Also contained in the head of these matches is a fuel – such as antimony sulfide – and powdered glass. Meanwhile, the striking area of the corresponding matchbox contains red phosphorus and again powdered glass or sand. When a match is struck, the friction generated between the match head and the box is sufficient to ignite the red phosphorus. Again sufficient heat is generated to prompt the decomposition of the potassium chlorate in the head. At this point the extra oxygen aids the fuel in the match stick and the wood itself catches fire. And voila, the birthday candles may be lit!

Potassium chlorate's oxygen-releasing abilities are also useful as a chemical way to store oxygen. Chemical oxygen generators, or oxygen canisters as they are also known, eliminate the need for big bulky oxygen cylinders such as those we see in hospitals and on scuba divers. They work by simply heating the potassium chlorate, which then decomposes to give up oxygen as a nearly pure gas. Chemical oxygen generators containing either potassium chlorate or a similar oxidiser are used on aeroplanes, space stations and submarines – all places where space is at a premium.

So that's potassium chlorate: from space stations to lighting birthday candles and making fireworks go with a bang – it's a chemical fit for any young wannabe chemist's dreams!

So does it perhaps bring back some memories? Chemistry World's Neil Withers there, with the explosion-filled chemistry of potassium chlorate. Next week, we go back to nature.

A Bulgarian pharmacologist was travelling in a rural part of his country when he noticed people rubbing snowdrops on their foreheads. When he asked why, he was told that it was an ancient cure for headaches.

Be that as it may, it was about that time that Russian scientists isolated a molecule called galantamine from Caucasian snowdrops and found it to have some useful properties - although not for headaches or witches' spells!

And to find out just how useful galantamine was found to be, including in treatment for polio and Alzheimer's disease, join Simon Cotton in next week's Chemistry in its element. Until then, thank you for listening, I'm Meera Senthilingam.