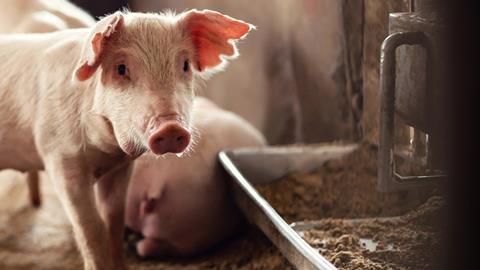 Common in the US but banned in the EU, this animal feed additive makes for muscular pigs and beefy international trade disputes.

Chlorinated chicken, hormone-fed beef, pesticides and genetic modification – there’s a distinct chemical flavour to many of the controversial aspects of the trade deal currently under discussion between the UK and the US. And although it hasn’t made as many headlines as chlorinated chicken –probably because it doesn’t quite trip off the tongue as neatly – ractopamine-fed pork may also become a key battleground in the agricultural arguments to come.

Ractopamine, as a livestock food additive, is banned in many parts of the world – including the European Union, China and Russia. It continues to be used in much of North America, where it’s added to feed for pigs, cattle and turkey. It’s marketed under brands like Topmax, Optaflexx and Paylean – names that hint at its ability to produce leaner animals with increased muscle size. A 2007 meta-analysis published in the journal Applied animal science concluded that ractopamine given in doses between 10 and 20 mg/kg ‘effectively improve[s] performance and carcass compositional attributes that are economically relevant to today’s swine producers’.

Ractopamine, usually given to animals as its hydrochloride, interacts with a number of biological pathways. It’s a beta agonist, meaning it can activate receptors found in muscle and fat tissues – different receptors then trigger different events, including increasing muscle relaxation and lipid metabolism. It also acts on trace amine-associated receptors, which are linked to gastrointestinal hormones, control of blood glucose and insulin levels.

Concerns about its capacity to interact with such vital biological systems were likely behind the decision by so many countries to ban both the practice of feeding ractopamine to livestock and the import of ractopamine-fed meat products. Operating on a broadly precautionary principal – lack of evidence of safety rather than existence of evidence of risk – beta agonists were banned from routine agricultural use in the EU by a directive that came into effect in 1997, and import of ractopamine-reared meat restricted. Differences in regional cuisine led to a similar ban in China, as there is some evidence that ractopamine and related compounds are likely to concentrate in organ meat & offal, parts of the animal that make up a greater proportion of the Chinese diet. 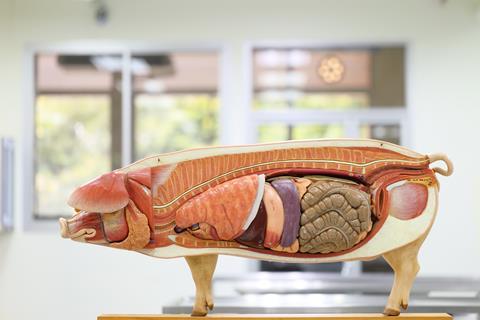 Very little direct research on the health impact of ractopamine exists, though there are some concerns about cardiovascular effects, albeit in very small studies. Incidents of poisoning from beta agonists in food are so rare that they ‘pose diagnostic challenge to both emergency physicians and clinical toxicologists’, according to a report in the American journal of emergency medicine.

This is not the first time ractopamine has been involved in an international trade dispute. The ban on meat reared with beta agonists is a significant barrier to US food producers, who argue that the ban is not based on scientific principles. Proponents point to the Codex alimentarius, a collection of food safety guidelines, which is recognised by the World Trade Organisation as the international reference standard against which to decide disputes. The codex lays out safe limits of ‘10 micrograms per kilogram of pig or cattle muscle, 40 micrograms per kilogram in liver and 90 micrograms per kilogram of the animals’ kidneys.’ If the codex says it’s safe, argues the US, then the EU blanket ban is illegitimate.

But the limits set out in the codex are themselves controversial. They were hotly disputed by the European Food Safety Authority, and narrowly won through a vote of the Codex alimentarius commission by just 69 to 67, with seven members abstaining. The game of international pork politics continues, with a 2017 report on foreign trade barriers produced by the Office of the United States trade representative saying ‘the United States will continue to engage the EU regarding the unscientific ban on meat and animal products produced using hormones, beta agonists, and other growth promotants.’ 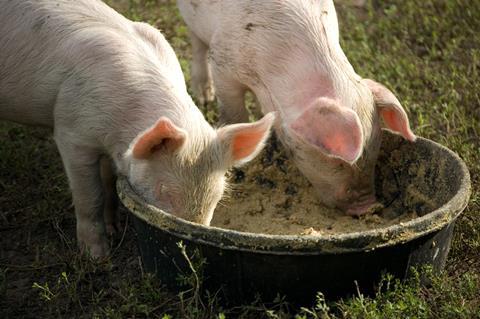 Beyond human safety concerns, environmental and animal welfare groups have campaigned against the addition of ractopamine to animal feed. In 2014, two separate lawsuits accused the US food and drug administration of inadequately assessing environmental and health impact when approving ractopamine-based feed. Animal welfare advocates cited reports to the FDA that ractopamine-fed pigs were more likely to show adverse effects, including ‘trembling, lameness, inability to walk or rise, reluctance to move, stiffness, hyperactivity, hoof disorder, difficulty breathing, collapse, and death.’ The FDA mandates a label on feed, stating ‘ractopamine may increase the number of injured and/or fatigued pigs during marketing.’

With the UK now able to set its own standards, we’re at a point where we must decide if we want to see ractopamine-fed meat entering our food supply. Consumers have broadly decried chlorinated chicken – leading some supermarkets to say they won’t stock these sorts of products – we’re yet to see if that strength of feeling will extend to pigs ‘beefed-up’ on beta agonists.

We’ll continue the porcine podcast theme next week, as Mike Freemantle looks at tannic acid and the practice that employs pigs to keep other livestock safe from poisoning.

The release of livestock pigs to wander freely in a forest is known as pannage. In the New Forest, the practice dates back to the time of William the Conqueror who founded the forest as a royal hunting ground in 1079.

Join Mike next time. Until then, get in touch with any compounds for us to consider: email chemistryworld@rsc.org or tweet @chemistryworld. And find the podcast archive at chemistryworld.com/podcasts. I’m Ben Valsler, thanks for joining me.