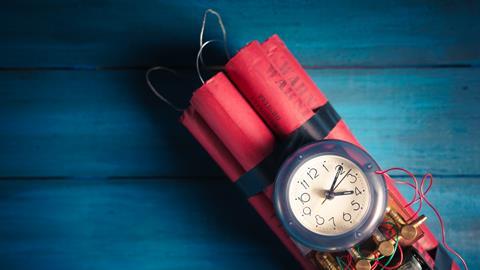 Simon Cotton takes us through the history of an explosive compound

This week, the many uses of an explosive comound. Explaining more, here's Simon Cotton:

When a compound is best known by an acronym, that usually means bad news. Just think of DDT, the insecticide, or GHB, which is best known as a 'date rape' drug. And then there is TNT, whose chemical name is 2,4,6-trinitrotoluene.

TNT was first made in 1863 by a German chemist, Joseph Wilbrand. He was trying to make a dyestuff, and TNT is yellow in colour. It was nearly 20 years before it was discovered to be an excellent high explosive.

At that time, 2,4,6-trinitrophenol, a molecule with a similar structure, was the best high explosive around. Better known as picric acid, it had a downside, as dry picric acid is very shock-sensitive. Moreover, it's acidic, so that it slowly corroded metal casings, forming metal salts that are even more shock-sensitive than the free acid. 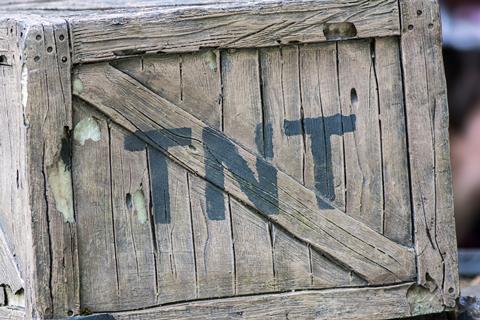 TNT had several advantages over other explosives. Although it is not as strong an explosive as picric acid, it was much safer to handle and harder to detonate. Because of its melting point of only 80?C, it became possible to fill shells safely with molten TNT. The German military started using TNT as their standard explosive in 1902, whilst the British stuck with picric acid, a choice with unfortunate consequences.

TNT-filled shells are more likely to penetrate armour before exploding, and they also produce a very high velocity shockwave.  In contrast, shells filled with the more sensitive picric acid did not penetrate armour, but exploded on contact, causing less damage. This was part of the reason for the Royal Navy suffering greater losses than the Germans at the Battle of Jutland in 1916.

The first world war resulted in an intense demand for toluene, which was not just needed for the manufacture of TNT, but was also involved in the synthesis of many dyes.

The problem was solved by the adoption of amatol as a high explosive, a mixture of 80% ammonium nitrate with 20% TNT. This not only helped the toluene go further but had an added bonus. One disadvantage of TNT is that the molecule does not contain enough oxygen to oxidise all the carbon and hydrogen it contains, so a TNT explosion is accompanied by a black cloud of carbon. Ammonium nitrate is an oxygen-rich explosive, producing more oxygen than it needs, and thus giving a white smoke rather than the black clouds associated with TNT.

Organic nitro compounds are widely used in explosives for a combination of reasons. The kind of organic compounds found in natural gas or petrol make good fuels, as the formation of oxygen-hydrogen bonds and carbon-oxygen double bonds releases a lot of energy and a good deal of hot gas, creating the kind of explosive forces than can drive an engine for example. When they are exploded, nitro-compounds like TNT also produce nitrogen gas, forming very strong nitrogen-nitrogen triple bonds and releasing even more energy.

The oxygen content of the nitro compunds also makes the molecules self-oxidising, and the very short distance between the oxygens and the carbon and hydrogen atoms they are combining with contributes to the speed of the reaction.

As well as being destructive, TNT is also very toxic. In the United States alone, over 17,000 cases of TNT poisoning were reported during the first world war, causing around 500 deaths of munitions workers due to liver damage and anaemia. By the second world war, safety procedures were tightened up. Cleaning up TNT-contaminated soil around factories or places where TNT has been used has become an important environmental issue and scientists are studying plant systems that can sequester and detoxify TNT.

Chemists have of course tried to improve on TNT, and sometimes with unexpected results. In 1888, a German chemist named Albert Baur made a version of TNT with an added tertiary-butyl group. Although it was no use as an explosive, it had a wonderful musky smell and became the forerunner of nitromusks that were the cornerstone of the perfume industry for the next half century. 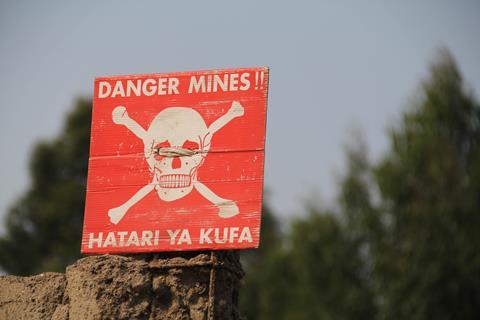 Today, over a hundred years after TNT was first employed as a military explosive, it is still widely used, notably as an explosive in landmines. Detecting TNT-filled landmines requires skill on the part of sniffer dogs and their handlers. It has only recently been realised that dogs trained to detect TNT landmines are actually responding to traces of an impurity. That impurity is 2,4-dinitrotoluene, or DNT. Although it is only present at a level below 0.1%, the smaller DNT is much more volatile than TNT, and can make up to 35% of the vapour escaping from a landmine. People are still trying to make landmine detectors using electronics or chemical systems, but at the present time it is still a job for man's best friend.

Certainly a risky job to have. That was Birmingham University's Simon Cotton with the energy-releasing chemistry of TNT. Now, next week: we venture into the lab and move from explosives to acids.

Most of us first come across the trio of strong acids - hydrochloric, nitric and sulphuric - when we venture into a chemistry lab at school. They aren't the kind of substances you find in the kitchen cupboard at home. Yet I can guarantee that one of these compounds has been part of your life every day since you were a baby. Because hydrochloric acid plays an essential role in your body. Your stomach contains a sizeable quantity of hydrochloric acid and can have a pH as low as 1.

And to find out more about the role hydrochloric acid plays in our stomachs, as well as its uses out in industry, join Brian Clegg in next week's Chemistry in it's element. Until then, thank you for listening. I'm Meera Senthilingam.