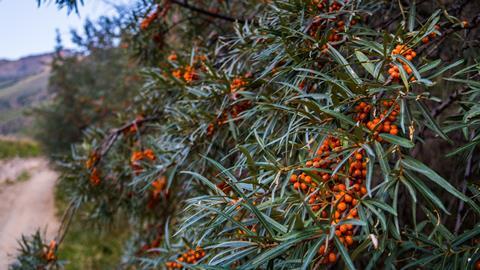 One of the many joys of writing about chemistry is that you can find inspiration almost anywhere and at any time. You can discover fascinating chemistry in everyday life, on holiday, in history, in literature, in art, on the radio and in TV programmes. In September 2018, for example, an episode of the weekly BBC TV programme Countryfile included a report from Cornwall on harvesting berries from sea buckthorn shrubs. The berries, it seems, are a ‘superfood.’ 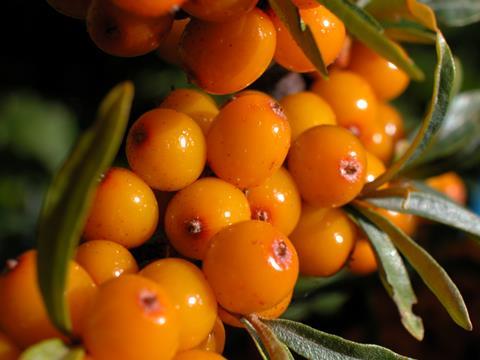 I must confess, I had never heard of this superfood, so I began to investigate. The shrubs, I learnt, originated in the Himalayas. They are now widespread, growing along rivers, and on coastal cliffs, sand dunes and mountains throughout Asia, North America and in much of Europe, including the British Isles. Birds such as fieldfares gorge on the bright orange berries in the winter.

We humans, however, find gathering the ripe berries hard work as they are protected by spiky thorns. They also have a tendency to burst. The berries have a sour taste and so are not normally eaten raw. They can, though, be used to make jam, purées and sauces. The juice pressed from the berries is usually mixed with other fruit juices to make it palatable as a drink.

The superfood status of sea buckthorn berries derives from the mouth-watering array of nutrients they contain. Oil extracted from the seeds and pulp of the berries is packed with vitamins such as vitamin A and vitamin C. It is particularly rich in tocopherols and tocotrienols. These are a group of eight fat-soluble antioxidant compounds collectively known as vitamin E. The vitamin also occurs naturally in a wide variety of other food sources including nuts and vegetables. 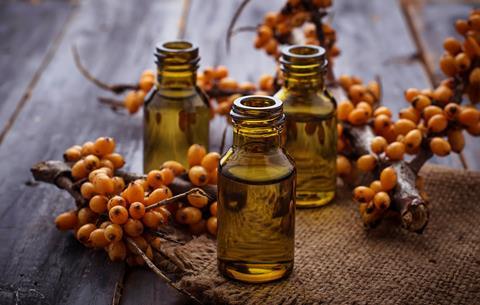 Vitamins are organic compounds that are required in small amounts for the healthy growth and functioning of animals – including ourselves. As they cannot be made in the body, they have to be supplied in food or drink. Dietary antioxidants such as vitamin E inhibit damaging oxidation reactions in animal tissues.

The vitamin E tocopherols are a group of four bicyclic organic compounds the molecular structures of which differ only in the number and positions of methyl groups attached to one of the rings – a phenol ring.

The four vitamin E tocotrienols have exactly the same molecular structures except that the side chains are unsaturated. They have three double bonds.

The most biologically active and abundant of all eight compounds is α-tocopherol. This has three methyl groups attached to its phenol ring. The compound has eight stereoisomers, only one of which exists naturally.

The antioxidant properties of the tocopherols and vitamin E have led to numerous studies of their use for the prevention and treatment of cancer, cardiovascular diseases, vascular dementia, eye problems such as age-related macular degeneration, and other diseases and conditions.

There have been similar studies of the health benefits of sea buckthorn. A fact sheet on the plant, published by the Ministry of Agriculture, Food and Fisheries in British Columbia, Canada, states that: ‘Medicinal uses of sea buckthorn are well documented in Asia and Europe. Sea buckthorn oil is approved for clinical use in hospitals in Russia. In China, it was formally listed in the “Pharmacopoeia” in 1977. More than ten different drugs have been developed from sea buckthorn in these countries…’

For these reasons, the berries have sometimes been called a ‘miracle fruit’. They have also been dubbed ‘beauty berries’ as it is thought they slow the ageing process and improve the condition of the skin. No wonder sea buckthorn has become known as a ‘wonder plant’.

Convinced of its value as a superfood? Well, I thought I’d give it a go. I recently bought a pack of sea buckthorn oil capsules and take a couple each day. I’m sure I must look younger already…

That was Mike Freemantle with sea buckthorn and tocopherols. Next week, Brian Clegg goes back to his childhood bathtime.

Describing exactly what was happening – coating yourself with a finely powdered mineral – sounds, frankly, bizarre. Yet this product, also known as talc or baby powder, was an absolute essential for children and adults alike.

Join Brian in the powder room next time. Until then, get in touch in the usual way – email chemistryworld@rsc.org or tweet @chemistryworld. I’m Ben Valsler, thanks for listening.