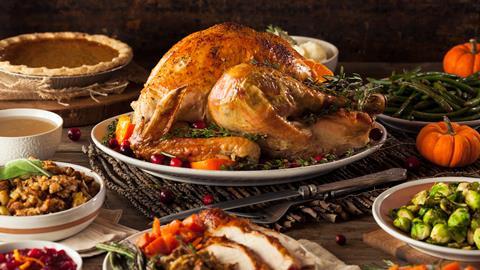 It’s Friday morning in the UK, and just a few hours ago our friends across the Atlantic were celebrating Thanksgiving. Traditionally that’s done with an indulgent family dinner with a turkey as its centrepiece. Around the dinner table, old alliances will have been strengthened, old arguments will have been renewed. And it’s likely that, in many households, an old factoid will have been rolled out – that turkey makes you sleepy because it contains tryptophan.

I use the word ‘factoid’ quite carefully – it’s often used to mean mini-fact, or an inconsequential bit of trivia. But that’s actually a factlet. The key thing with a factoid is that it’s wrong, but it gets repeated so often that people just start to accept it as truth. Factoids are basically zombie facts – disproven, but still shambling through public consciousness because they’ve got that ring of truth to them and a simplistic appeal.

It’s certainly true that turkey contains tryptophan, but so does chicken, and in similar proportions. It’s actually quite a common amino acid, so you’ll find it in almost every meal you eat. Comparing constituents by dry weight, egg white contains far more tryptophan than turkey does, but you don’t hear people claiming than omelettes make you nod off.

It’s likely that your big roast dinner is making you sleepy because of the quantity of food you’re consuming, not because of any one particular ingredient, but exactly why a big meal makes people drowsy is still not that well understood. It’s probably a combination of complex cascades of hormonal and neuronal factors, mediated by the sudden change in blood chemistry and the physical presence of a large mass in the digestive system. But that doesn’t make for an easy-to-digest soundbite.

With that factoid put to bed, we can dive in to genuine factlets about tryptophan. 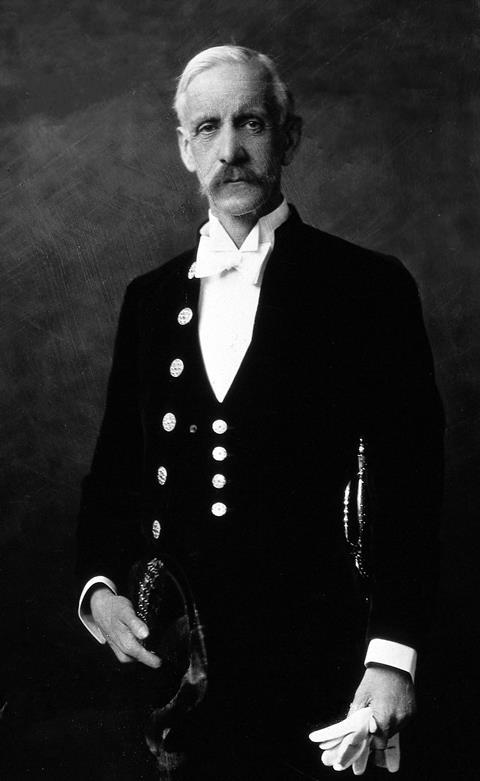 It was first isolated from casein in 1901 by Frederick Hopkins, who would go on to receive the 1929 Nobel prize in physiology or medicine, but we had to wait over a century to determine its crystal structure.

It’s also an essential part of the human diet – we can’t make this particular amino acid ourselves – and it’s a key building block for a series of important proteins. Luckily though, it’s easy to find a dietary source; even if you’re avoiding meat, dairy and eggs, it’s plentiful in soybeans, chickpeas, many seeds, oats and even chocolate.

Once in the body, tryptophan acts as a precursor for important products, including the neurotransmitter serotonin and the hormone melatonin. The enzyme tryptophan hydroxylase first converts tryptophan to 5-hydroxytryptophan. Then, another factor, known as aromatic L-amino acid decarboxylase, removes the carboxyl group to produce 5-hydroxytryptamine, which is the more formal name for serotonin. And as we continue our tour of this biosynthesis pathway, we’ll see that we’re just a couple of steps away from melatonin, which is produced from serotonin via normelatonin. 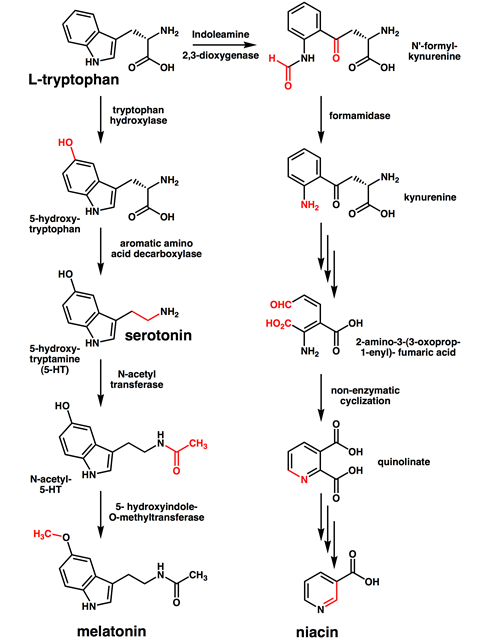 Through a different pathway, tryptophan is converted to niacin, or vitamin B3, in the liver. All three of these compounds are vital to normal, healthy lives and important enough to deserve their own podcasts previously published, so I won’t go on about them here.

But even when you’ve eaten that thanksgiving dinner, or just a chocolate flapjack, not all of the tryptophan in the meal makes it into your bloodstream. The microbes in your gut will also metabolise tryptophan into biologically important compounds. The balance of these will depend on your personal gastrointestinal microbiome, but it will include the neuroprotectant 3-indolepropionic acid, the antifungal indole-3-carboxaldehyde and the multipurpose compound indole.

As with so much science, we are left to counter zombie facts with ‘it’s not as simple as that’. The complexities around a relatively simple compound like tryptophan, where multiple biological pathways clash and intertwine, and an entire zoo of microorganisms further complicate the chemistry, are just one of myriad examples.

Next week, Frances Addison explores the genesis of a modern-day medical crisis.

But while heroin was clearly not a suitable candidate for the job, its sudden absence left doctors with very few alternatives to morphine when treating moderate or severe pain. Behind the scenes, drug developers were scrambling to identify potential candidates to plug the gap and, unsurprisingly, many of them turned back to opium poppies for inspiration.

Join Frances next time to look at some of the US’s most prescribed painkillers – oxycodone and hydrocodone. Until then, get in touch in the usual ways – email chemistryworld@rsc.org or tweet @chemistryworld. I’m Ben Valsler, thanks for joining me.