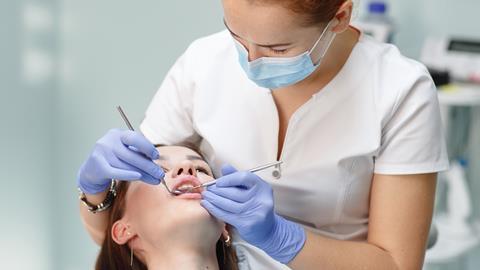 Lay back in the chair and say 'Ahh', as Mike Freemantle introduces zinc polycarboxylate dental cement

A trip to the dentist is a nightmare for some, but a pleasant day out and a chance to talk science for Mike Freemantle…

During a recent check-up, my dentist found a small cavity in one of my teeth. So small in fact that even my tooth brush had passed it by before the visit. After fishing out a minute particle of breakfast from the cavity, he proceeded to fill the hole with dental cement. My dentist and I love to talk about chemistry. So, while his assistant prepared the cement, I asked him what the cement was. Zinc polycarboxylate, he told me. 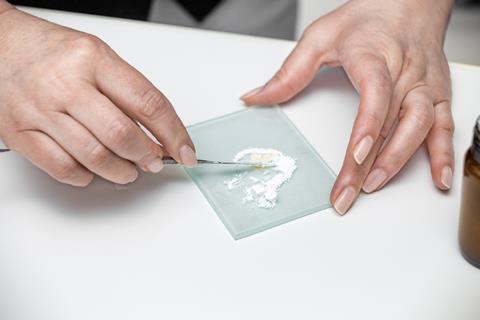 Dental cements are used as fillings, for lining cavities and for glueing crowns to teeth. The archetypal dental cement, still widely used today, is zinc phosphate. It is prepared by mixing zinc oxide powder with an aqueous solution of phosphoric acid on a cold glass slab while the patient is sitting in the chair. The cement is then applied to the tooth before it has a chance to set.

The powder also contains a small amount of magnesium oxide and traces of other oxides that modify the properties of the cement. Magnesium oxide, for example, helps the cement to sinter – that is, to form a compact solid mass when it sets. 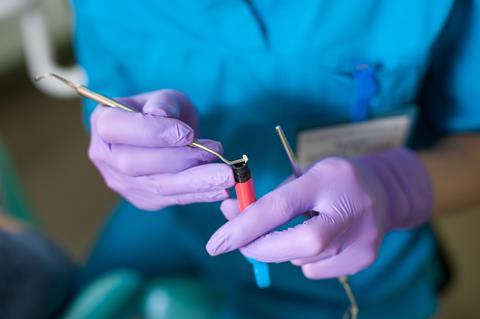 Zinc polycarboxylate cement is prepared in a similar way using zinc oxide powder. The liquid, however, is an aqueous solution of polyacrylic acid or a copolymer of acrylic acid and another unsaturated carboxylic acid.

Polyacrylic acid is an anionic polymer. It consists of long chains of carbon atoms, every other one of which is attached to a carboxyl group. In the presence of water, the carboxyl groups lose their hydrogen atoms to form carboxylate anions. These have single negative charges.

The zinc oxide in the powder acts as a base when it comes into contact with the acid. The acid-base reaction leads to the release of zinc cations with two positive charges. These cations bind to carboxylate ions on adjacent polymer chains forming crosslinks between the chains. The product is a three-dimensional matrix of the salt zinc polycarboxylate. The framework incorporates unreacted oxide particles. In a simultaneous but separate process, adjacent carboxylate ions on some of the polymer chains bind to the doubly charged calcium cations on the enamel surface of the tooth. The enamel consists mainly of calcium phosphate. This binding process enables the crosslinked polymer salt to fuse to the tooth. 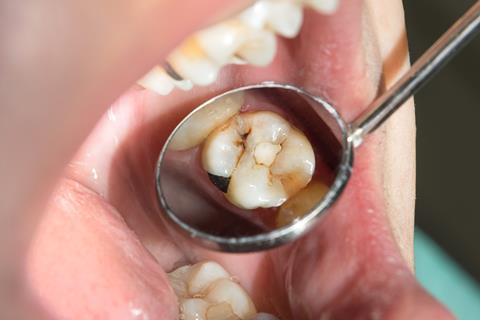 Polyacrylic acid is also used in an acid-base reaction to make another type of dental cement known as a glass ionomer. A viscous paste of the ionomer is typically prepared by mixing an aqueous solution of the anionic polymer with finely powdered silicate glass containing aluminium, calcium, fluorine, and often other elements. The presence of aluminium and calcium ensures that the glass is basic. When the powder and liquid are mixed, calcium and aluminium cations form crosslinks with the carboxylate anions on the polymer chains and, when applied to a tooth, bind to the calcium ions on the surface of the enamel.

The cement sets within a few minutes into a hard, solid polycarboxylate salt that adheres to the tooth. The salt has a rigid cage-like structure incorporating unreacted glass particles that act as a filler to reinforce the set cement. Unlike other dental cements, glass ionomers slowly release fluoride ions which can strengthen teeth and prevent dental caries.

The ability of polycarboxylates to bond with metals has been widely exploited in other applications, most notably in cleaning products such as household dishwashing and laundry detergents. Water-soluble polycarboxylates in detergents bind with insoluble metal compounds in the water and inhibit the growth of their crystals. These metal compounds are formed when surfactant anions in the detergents combine with calcium, magnesium and other metal cations in hard water. Without such treatment, the crystals can become encrusted in the fabrics and discolour them. In addition, the polycarboxylates help disperse soil and other dirt particles and keep them suspended in the wash.

Water-soluble polycarboxylates have also proved immensely valuable as super-absorbents. Sodium polyacrylate, for example, can absorb hundreds of times its weight in water. It is used in wound dressings, sanitary pads, urine bags, disposable nappies and lots of other products. 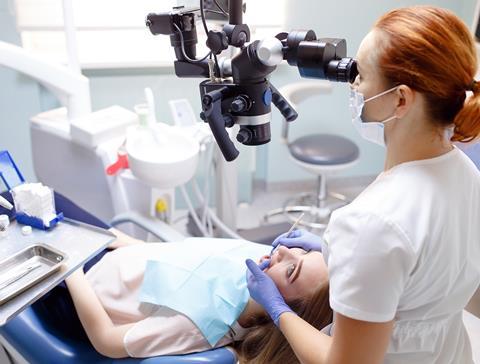 But not in dental care materials as far as I know. Even so, I can’t wait for my next check-up and sink my teeth into another discussion with my dentist on the fascinating role of polycarboxylates in dentistry.

That was Mike Freemantle, fresh from the dentist’s chair.

Next week sees the launch of our Voices of Chemistry collection, in collaboration with Notch Communications. One of the Voices is Ian Robertson from PerkinElmer – in the collection he explains how a chance discovery on a Spanish beach led him to find ways to tackle the problem of plastic waste in our oceans.

Plastic items have been found at the bottom of the Mariana trench in the pacific ocean, approximately 6.8 miles down on the sea bed. This is one of the remotest places on the planet. Almost 20% of microplastic pollution in the Mediterranean sea was found to be polypropylene and around 66% of the total found to be low-density polymers, including polyethylenes.

Join Ian next week for more about polypropylene and plastic pollution. Until then, get in touch with any questions or comments – email chemistryworld@rsc.org or tweet @chemistryworld. I’m Ben Valsler, thanks for joining me.