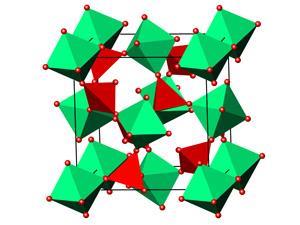 Generally, things get bigger as they get hotter. Neil Withers examines one of the exceptions – zirconium tungstate

This week, we go back to school with Neil Withers.

When you heat things up, they generally get bigger. That’s what I learnt at school, and for most things it holds true. But not all. There are some materials that actually shrink as they get hotter, and zirconium tungstate, ZrW2O8, is one of the most studied and best understood. 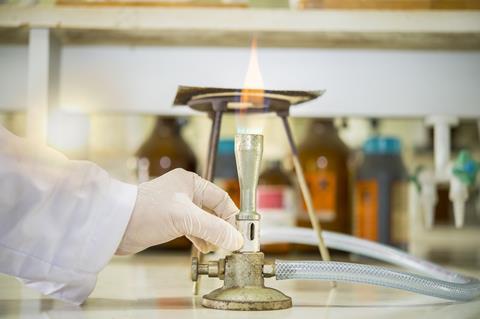 To continue my nostalgia for my school science classroom, let’s think back to how we were taught about thermal expansion. I remember my teacher telling us to imagine that we were atoms. If we had more energy, and were running around the room instead of sitting quietly, we’d start bumping into things and would need more space. And that’s roughly how it is for atoms: give them more heat energy and they vibrate more, needing more room between them.

These hand-holding polyhedra are what gives zirconium tungstate its negative thermal expansion. One of its main vibrational modes is for individual octahedra and tetrahedra to wobble back and forth with the oxygen atoms moving a lot while the metal atoms move less. This guitar-string-style vibration slightly pulls the metal atoms together, reducing the overall size of the material. You can do it yourself: bunch your hands into fists, then put them together in front of your chest. Move them up and down enough and you’ll notice that your elbows move closer together.

With all this talk of things shrinking on heating (and vice versa), you may now be thinking about the best-known example of a substance that enlarges when cooled: water. But this effect only happens during the transition between its liquid and solid phases. Zirconium tungstate, on the other hand, contracts all the way from 2 Kelvin up to 1400.

Besides its undoubted interest as a curious and interesting phenomenon, what use is negative thermal expansion? Well, at the moment, sadly not much. Regular old thermal expansion causes problems in a number of places, from expanding metal train rails to ceramic ovenware shattering when mistreated. Creating ceramics with some shrinking and some expanding components could result in materials that neither expand nor contract when heated – so they would be impervious to thermal shock.

Although cracking and shattering kitchenware is annoying, there’s another place where thermal shock can be more painful: your teeth. Rapidly changing from a hot to a cold environment (or vice versa) can often happen when eating and drinking. And if your fillings expand and contract at a different rate to your teeth, they are more likely to be painful – or even fall out. So being able to make materials with a tailored expansion that exactly matches that of your teeth could save many people from aching teeth.

Although pain-free fillings would be desirable, these applications are perhaps a little underwhelming for such an unusual physical property – I prefer to think of ZrW2O8 and its fellow negative thermal expansion materials as wonderful and exotic creatures in the chemical zoo. They show behaviour very few other materials do, and it’s behaviour you never would expect.

Chemistry World’s Neil Withers, with the unexpected chemistry of zirconium tungstate. Next week, beware of the white powder.

He had treated mercury with nitric acid and alcohol to make a white crystalline powder. The material exploded violently when hit by a hammer. In other words, it fulminated.

Find out exactly what this means, and the compound it produces in next week’s Chemistry in its Element. Until then, thank you for listening, I’m Meera Senthilingam.