Influencing the future of science

The Acquity Advanced Polymer Chromatography system is Waters’ answer to gel permeation chromatography’s ever more apparent limitations, and the questions that polymer innovation raised along the way

Questions that may flit in and out of analytical chemists’ minds are what inspire innovations in Waters’ Acquity Advanced Polymer Chromatography (APC) system. For senior scientist Dick Andrews, that’s questions like, why are the peaks from radio frequency interference (RFI) detectors so broad? And, why are oligomers so hard to resolve using size exclusion chromatography (SEC) methods?

It’s answers to these questions that underpin the APC system’s design principles. With awareness of the challenges that polymer characterisation creates, and drawing on Waters’ unique insight into the advantages and disadvantages of SEC – also known as gel permeation chromatography (GPC) – dating back decades, Andrews worked with Waters’ innovation teams to make the APC fit for 21st century polymer analysis, and beyond.

Waters cornered the GPC innovation space when it developed the world’s first high-performance liquid chromatography (HPLC) instrument – the GPC 100 – at Dow’s request back in 1963. And scientists have used the technique to characterise molecular weight distributions in polymeric materials ever since. A traditionally low resolution technique, GPC gives some insight into a polymer’s expected properties. But, the low resolving power of GPC can inhibit scientists’ capacity to establish the structure–property relationships in high performance and functionalised materials. Especially polymeric substances of low molecular weight.

It’s the impact of the chromatographic system on the overall separation resolution, he says. ’Typically measured as extra column band spreading, but when it is not matched to the column’s resolving power, the overall chromatographic peak shape distorts.’ At worst, band spreading impacts the accuracy of a polymer’s molecular weight distribution data. In the APC system, extra column band spreading sources were minimised by optimising tubing lengths for a low volume fluidic path, with connections designed for zero dead volume. And, the Acquity RF achieves thermal stability with a volume ten times smaller than traditional RFI detectors. 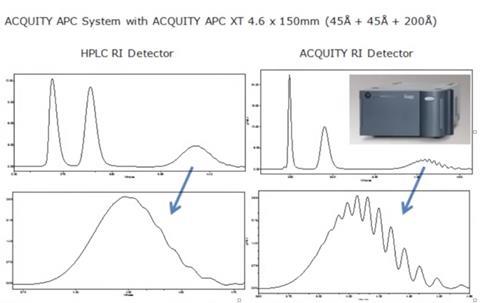 In addition to significantly improving resolution for SEC, the APC also delivers the overall performance required of all polymer separations. 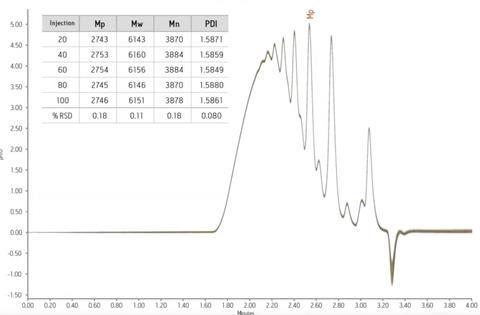 An overlay of 100 injections of an epoxy resin sample

The molecular weight averages have excellent precision with a relative standard deviation better than 0.2% for the 100 injections.

Extra-column band spreading is the – unwanted – broadening of a chromatographic peak that takes place outside of the active column area in the system, from the point of injection to the point of detection.

This type of broadening, which in regular HPLC is of modest importance, becomes very important in the case of ultra-UHPLC, since full separation takes place within minutes and peaks have to be very sharp.

In partnership with Waters Corporation, we’ve put together a bundle of free resources to support the precision polymer analysis collection.

Influencing the future of science