The ligand that will give you just the hand you need

This week, where would our superheroes be without their sidekicks?

Every hero needs a sidekick. Think Batman and Robin, Shrek and Donkey, or, if you prefer something more classic, Don Quixote and Sancho Panza. In organic chemistry, if metal catalysts are the heroes, ligands are their sidekick.

Metal catalysts can make and break bonds that chemists find otherwise difficult to manipulate. And, like a production line robot, one catalyst molecule can assemble thousands of new molecules. Ligands, on the other hand, are often overlooked. But without these small organic molecules, many metals would do very little catalysing at all. And when it comes to chiral catalysis – making only one mirror image of handed molecules – phosphine ligands like 2,2’-bis(diphenylphosphino)-1,1’-binaphthyl, or BINAP for short, might well steal the catalyst’s place in the limelight. 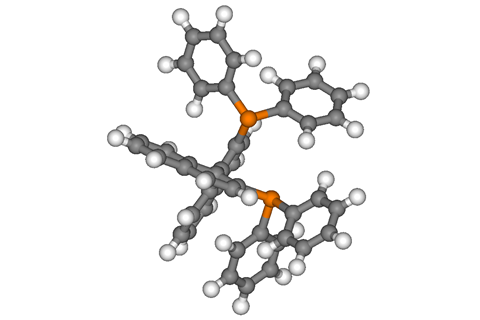 Today, chemists are starting to get a grip on selectively making single mirror image molecules (called enantiomers). But before the mid-1960s, making single enantiomers was difficult to say the least. At the time, L-DOPA, a rare amino acid and natural precursor of the neurotransmitter dopamine, was in high demand: researchers had recently found out that they could use it to treat Parkinson’s disease. The chemical company Hoffman-La Roche was making DOPA as a mixture of both enantiomers. But only L-DOPA is active in the body, so in a lengthy and costly process, the company had to remove and discard the other, inactive D enantiomer from the mixture.

Working for Hoffman-La Roche’s competitor, Monsanto, William Knowles and his team were dabbling in rhodium catalysis, trying to transform alkenes into single enantiomer alkanes. Knowles already knew that a phosphine ligand could make rhodium a more reactive catalyst, but what about using a chiral phosphine ligand to make the whole process produce only one mirror image product?

At first, the most Knowles’ team managed was to generate a rather unimpressive 60:40 mixture of alkane enantiomers, which didn’t make the idea look very promising. Actually, nobody really believed their chiral ligand had potential, not even their bosses at Monsanto.

‘There were others using other phosphines with uninteresting results. Seemingly, we may have been the only ones naïve enough to pursue this lead in depth. Actually there was definitely nothing in the literature to encourage us to proceed further.’

Luckily, this didn’t deter Knowles. And Monsanto’s appetite for DOPA was the perfect opportunity to give his phosphines a chance. By 1977, Knowles’ team had managed to make almost pure L-DOPA on industrial scale. He and his team celebrated:

‘Here, with this simplest of molecules, we had solved one of the toughest synthetic problems. […] this was the first time ever that anyone had obtained enzymelike selectivity with a man-made catalyst!’

But not everybody was convinced that Knowles’ ligand had any scope beyond making DOPA. Knowles’ phosphine was a P-chiral ligand, meaning that it had a chiral phosphorus atom. Depending on the substituents bound to the phosphorus atoms, these tend to flip from one enantiomer to the other, like an umbrella turning inside out. Chemists needed something more universally stable and versatile.

Ryōji Noyori, working with a team at Nagoya University in Japan, was trying to devise a universal method to turn alkenes into single enantiomer alkanes. Noyori was using bisphosphines that can pinch metal catalysts between their two phosphine units like a pincer. And, he was fascinated by the molecular beauty of atropisomers – unusual, axially chiral molecules like BINAP.

Unlike organic molecules that are chiral because of a carbon with four different substituents, BINAP looks symmetrical, but it’s the restricted rotation around a single bond, an axis that connects two bulky units, that makes it chiral. BINAP kind of looks like a pair of scissors, where the bulkiness of the handles prevents the scissor’s two parts from going past each other while rotating around the connecting bolt.

BINAP’s synthesis was unexpectedly difficult, but after four years of work, Noyori had managed it. Another ten years on, by the mid-1980s, Noyori’s ruthenium-BINAP catalyst had truly taken off: lab chemists were using BINAP to make all sorts of metal-catalysed reactions selectively produce single enantiomers, as were big companies: fragrance chemical producer Tagasako was using ruthenium-BINAP to make chiral natural products such as menthol and citronellal in enormous, several-ton batches.

Over the years, chemists have outdone themselves to design all sorts of chiral phosphine ligands, but BINAP remains a staple of chiral metal catalysis. For their big work with small ligands, both Noyori and Knowles received a Nobel prize in 2001.

Katrina Krämer on BINAP and the importance of making the right kind of chiral molecule. Next week, evolution in action…

Some bacteria living in landfill sites have evolved to eat PET and use it as their main carbon source. Perhaps it was inevitable – in an environment where many species compete to use the smelly, rotten organic matter, the mountains of PET provide a new ecological opportunity – an untouched buffet of bottles.

Fernando Gomollón-Bel on polyethylene terephthalate or PET. Until then , drop me a line with any compounds you would like to hear more about. Email chemistryworld@rsc.org or tweet @chemistryworld. I’m Ben Valsler, thanks for listening.