A new chemical tag that selectively binds carbonyls could help to winkle out rare and unusual natural product molecules – something that could be a boon for those searching for new antibiotics and drugs. Because the tag is dibrominated, researchers can easily identify a wide range of natural products, including those present at very low concentrations, using mass spectrometry.

The discovery of new natural products is an important route to new drug candidates, and to better understanding biological pathways. However, abundant natural products keep being rediscovered, while the rarer ones are missed.

A team of researchers led by Douglas Mitchell at the University of Illinois at Urbana–Champaign in the US has come up with a molecule to identify new natural products in bacterial extracts. This chemical tag has a aminooxy group that selectively attaches to carbonyl groups – aldehydes and ketones. Then, because the tag has two bromine atoms in its structure, it confers a characteristic isotopic signal on these products that can be simply spotted in mass spectra. The method was validated by labelling known carbonyl-containing natural products like the antibiotics streptomycin and rosamicin.

Tucker Maxson , author of the paper and a postdoctoral researcher at the US Army Medical Research Institute of Infectious Diseases in Maryland, believes ‘the main advantage of this technique is that minimal effort is required to determine whether a hit is likely to be an already known compound. Once we know its mass and the fact that it contains a reactive carbonyl group, [we] can easily search through natural product databases’. Maxson says that they chose the structure of the chemical tag not only for its characteristic signature, but also ‘because it can be easily prepared from commercially available components with simple synthetic reactions. We hope this will make the probe more accessible to labs that don’t necessarily have people trained in organic chemistry.’ 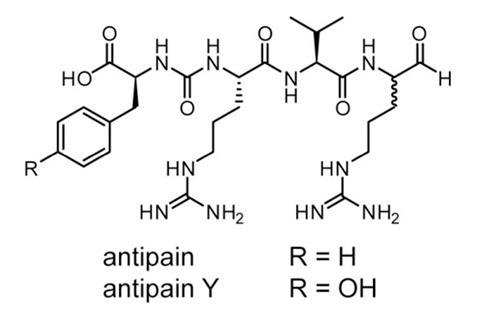 Ben Naman, a natural products researcher at the Scripps Institution of Oceanography in San Diego, US, says ‘this technique will indeed reduce the rediscovery rate by giving scientists access to significantly lower abundance natural products […] that would not be considered reasonable targets for isolation in traditional discovery programs’. He adds that it could help to winnow out interesting new drug candidates.

This new strategy was tested in a series of bacterial extracts and has already had some success. A previously unknown product called deimino-antipain was discovered that is related to a known bioactive compound. Both Maxson and Naman believe this technique could be used to prospect for interesting molecules in other organisms. ‘This approach will be suited for investigating secondary metabolites of other invertebrates, especially those that can be readily cultured,’ Naman says. ‘I can also envision using [it with] computational techniques to rapidly analyse crude extracts from collections of natural extracts.’