The brightness of the displays in our electronics is something we so passively take for granted every day: from browsing on smartphones and tablets, to working on computers and watching our favourite television shows. Facilitating this enjoyment of our screens for hours on end, as we so often do, is partly down to quantum dots – the semiconductor nanocrystals with unique optical properties that can withstand hours of electrical activity, and provide us with the high definition and brightness we experience on our screens.

When considering these properties, it should therefore have come as no surprise that scientists back in the nineties thought of harnessing this powerful electronic display technology in the life sciences – as fluorescent dyes and probes, in anything from disease diagnosis to medical imaging.

After some pioneering articles in 1998,1,2 the idea of using quantum dots in biology and medicine was born. In one of these original papers it was reported that, when transported into HeLa cells in culture, quantum dots appeared a staggering 20 times as bright, and 100 times more stable against fading when compared to traditional organic dyes.1 Since then, quantum dots have had their fair share of the lime light in nanomedicine research, from labelling breast cancer markers to monitoring cell trafficking in live cells.

So here we have a brand new marker, that doesn’t fade, shines brighter, and even has a tuneable emission spectra so that you can finely alter the colour of the fluorescence. Eureka moment! Right? Well, not quite! Unfortunately, when being designed for use in electronic screens, as they originally were, toxicity was of course not a prime consideration. Quantum dots have a cadmium core – a naturally toxic heavy metal that has been known to cause lung diseases, reduced bone density, birth defects, and renal dysfunction through kidney damage, among other life-altering effects.

Not to worry – we can give it a protective polymer coating, right? Yes, in theory. But when done in practice in vivo, it was found that the toxic heavy metals still leaked out of the core, even when surrounded with a protective layer – a major set back for any hope of using quantum dots in human diagnostics or therapy.

Noticing this major issue, researchers working on quantum dots at Kings College London in the UK looked for an alternative. ‘Academics in the US had published research on using quantum dots in imaging and I remember reading the paper and thinking “That’s just not the right way to do it,”’ said Mark Green, professor of bio-nanotechnoogy at Kings College. ‘Although the research had great principles, quantum dots have cadmium in them, so they’re never going to have clinical applications.’

After years of pondering about alternatives within his lab, little did he know that the idea would come to him while waiting at a set of traffic lights driving home one evening: ‘It suddenly hit me – why don’t we use organic semiconductors instead of metal containing inorganic semiconductors?’

Compared to inorganic metal particles such as those found in OLED and LED TVs, organic semiconductors are known to have an effortless and safe integration with chemical and biological processes. This makes them an ideal candidate for future in vivo applications. ‘I wasn’t sure if it was feasible,’ he said. ‘I thought it was a nice idea and it took a lot of literature and lab work to realise it could be quite simple.’

It was about 14 years ago, after a few preliminary experiments exploring the idea, that Green realised he was on to something. ‘It’s taken a lot of fine tuning, playing around, and now we’re at the point where we realise we have something special.’

This ‘something special’ is Green’s conjugated polymer nanoparticle (CPN) technology, which last year was licensed out of Kings College by Stream Bio. CPNs have a non-toxic semiconductor light-emitting polymer core, and a capping on the surface that makes them biologically compatible. What’s more, these CPNs have emission and stability properties that far exceed anything ever seen by quantum dots. ‘Quantum dots were previously thought to be the brightest marker tool on the market, but we’ve found these CPNs to be around 200 times brighter than them,’ Green says.

Conjugated polymer nanoparticles (CPNs) have a fluorescent hydrophobic polymer core (shown in red), containing iron oxide. A capping molecule increases hydrophilicity, and conjugated molecules, such as antibodies, oligonucleotides and proteins, can be bound to the surface for specific targeting.

So far, in the lab, the CPNs have remained impressively bright and stable: despite sitting on the desk for over two years, the team are still waiting for them to fade. They also have a high sensitivity and can be produced in a range of different wavelengths and colours. They have a versatile surface that can be personalised with select markers, such as antibodies, for direct targeting to specific locations, for example to tumours.

The technology is already creating its own excitement, having seen interest from major companies across many industries, for a variety of applications.

Beyond the brightness, sensitivity, safety and specific targeting capability, this excitement is partly down to the unique magnetic functionality of CPNs. This was originally added to enable multimodal imaging, that combines in vivo fluorescent and MRI imaging research. However, when applied to in vitro applications, the iron oxide within the core was found to facilitate movement, manipulation, purification and quantification of particles and cell samples – features that are not currently available with other reagents.

The  in vitro applications of CPNs and it’s ‘magnetic handle’ was not something that Green’s team originally intended, but it has ended up as an extra research tool with a unique advantage that could be enormously useful to scientists across the life science industry. For example, the magnetism could facilitate the easy manipulation and examination of a single cell of interest. Looking further ahead, on top of the originally intended multimodal imaging, the increased sensitivity and photostability has a huge potential impact in diagnostics, targeted drug delivery and therapeutics.

‘The technology allows for long-term tracking, looking at new disease states, and studies that we couldn’t even do before,’ said Green. ‘This has massive implications in improving patient waiting times in the diagnosis of a range of diseases.’

Still in their infancy, the true capabilities of CPNs are sure to be realised later down the line, when individual labs are using them and building their own machinery around the platform to create their own novel imaging and therapeutic techniques. But right now, it’s the in vitro applications of CPNs that are causing a stir. 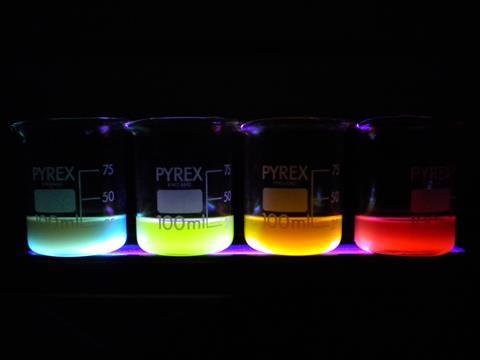 A range of magnetic conjugated polymer nanoparticles, excited at 365nm

The development of a new process to scale-up the CPNs has been enabled at the Centre for Process Innovation (CPI) – a UK-based technology innovation centre located in the north-east of England. With funding from the European Regional Development Fund’s Engineered Surfaces and Materials SME Outreach Support Programme, there are now the larger amounts needed to satisfy demands from scientists from all over the world.

CPI’s expertise in nanoparticle formulation has enabled the production of CPNs in four different wavelengths, which will shortly be available to laboratories all over the world through a distribution network of global life science companies. Although Stream Bio is initially offering these four colours, other wavelengths are in development, including products that fluoresce at the infrared end of the spectrum. The commercialisation of CPNs could revolutionise basic molecular imaging and techniques such as flow cytometry, Fish, Fret, Elisa and western blotting, amongst many others.

Although it seems quantum dots will not be used in medicine, Green’s endeavour from electronics technology to today’s CPNs proves how applying successful innovations across sectors can deliver new innovative technologies, which could not have been developed alone. From great photostability, sensitivity and longevity, to the ability to target so specifically and manipulate through magnetism, thanks to screen and display electronics, the rise of the CPN technology could very well turn medical research, diagnostics and therapeutics on its head.