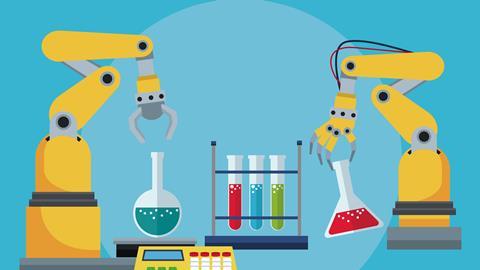 1500 reactions per day go with the flow

An automated flow chemistry system that carries out and analyses one nanoscale reaction every 45 seconds can overcome the problems of traditional reaction screening and could be a boon for drug discovery.

Developed by researchers at the pharmaceutical giant Pfizer, the machine aims to find ideal conditions for a Suzuki–Miyaura reaction. Although this palladium-catalysed coupling gives access to many pharmaceutical compounds, it requires setting up a complex system of two coupling partners, a catalyst, a base and a solvent mixture, all of which influence the reaction’s outcome. Often, chemists need to screen hundreds of combinations to find the one that gives the best yield.

Inspired by Merck’s high-throughput screening method, the Pfizer scientists wanted to eliminate the drawbacks that come with using technology borrowed from biotechnology screening. Merck carried out reactions inside tiny plastic compartments, which meant they were restricted on what solvents they could use and could not heat up the reaction without some of the components evaporating. 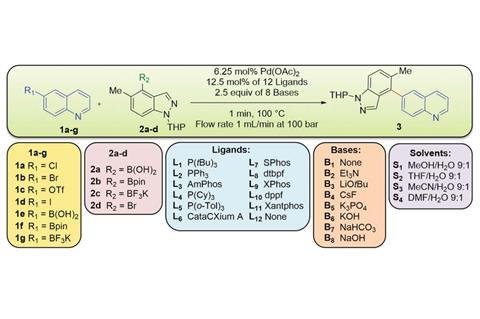 Pfizer’s flow system, however, tolerates even volatile solvents at elevated temperatures. A modified commercial liquid chromatography autosampler injects tiny amounts of each compound into a solvent stream, where they are mixed and left to react for one minute at 100°C. At the end of the line, two liquid chromatography–mass spectrometry machines work in tandem to analyse reactions in 45 second intervals.

Over four days, Pfizer’s machine sampled 5760 different reactions – more than 1500 every 24 hours. The team then chose the highest yielding reactions and scaled them up using flow and batch methods. Even reactions using up to 5000 times the amount of material gave almost identical yields to the nanosize system.

Although the flow system could speed up drug discovery by assessing thousands of reaction conditions quickly and easily, it currently can’t deal with heterogeneous or biphasic mixtures. This gap in the current technology, the Pfizer team says, still needs to be addressed.