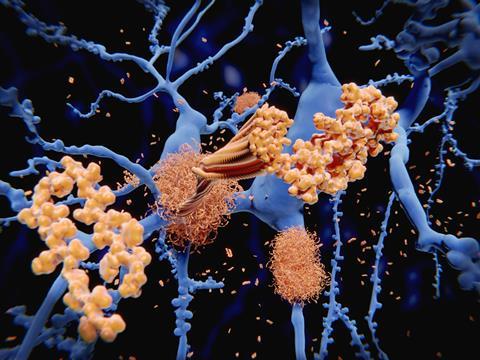 Excess copper linked to Alzheimer’s disease can facilitate its own removal by catalysing the synthesis of a drug that sequesters copper, new research shows. The drug also photo-oxygenates amyloid-β plaques, causing them to break up. Tests on Alzheimer’s disease models, using the common laboratory worm Caenorhabditis elegans, showed that the therapy could suppress amyloid-β-mediated paralysis.

Senile plaques in Alzheimer’s disease patients’ brains often contain high concentrations of polyvalent metal cations such as copper, zinc and iron. Quite why they do is unclear but there is evidence that metal ion binding to amyloid-β accelerates amyloid aggregation – eliminating these build-ups is therefore one, of many, targets for Alzheimer’s disease therapies.

Now, researchers led by Xiaogang Qu at the Changchun Institute of Applied Chemistry in China have shown that the copper in amyloid-β–copper aggregates could catalyse the formation of an Alzheimer’s disease therapy right where it’s needed. The therapy consists of silica nanoparticles loaded with ascorbic acid, a thioflavin T analogue and propargylglycine. Copper in amyloid-β–copper aggregates can catalyse an azide–alkyne cycloaddition – the classic click reaction – to turn the contents of the silica nanoparticles into a therapeutic compound.

‘The [therapeutic] compound integrates an amyloid-β-specific photosensitiser with a copper prochelator. Harnessing the synergy of photooxidising amyloid-β and chelating copper, the bifunctional compound can dissociate amyloid-β–copper aggregates and ameliorate amyloid-β–copper-mediated cytotoxicity,’ says Qu.

After establishing its activity, the researchers found that the drug is synthesised at a concentration dependent on the amount of amyloid-β–copper aggregates. Synthesis of the drug is therefore both self-triggered and self-regulated.

Synthesising the drug at the site of the plaques overcomes issues of poor target specificity and poor pharmacokinetics. It allows for increased drug concentration at the target site, potentially reducing off-target effects. And by using endogenous, neurotoxic copper there is no impact on copper homeostasis in healthy cells.

‘It’s very interesting to use copper that accumulates as a toxin to catalyse a reaction to make a compound to sequester it,’ comments Matthew Disney, who designs selective therapeutics to target diseases such as Alzheimer’s at the Scripps Research Institute in the US. ‘I think there are a great many potential applications for on-site drug assembly by using in situ click chemistry and this looks like an exciting and important one.’