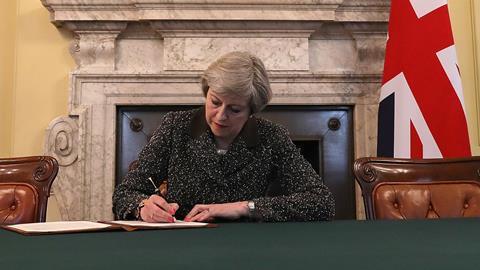 Fears around funding, staff retention and students remain uppermost in researchers’ minds as life outside the EU beckons

Nine months after the UK’s referendum on the EU, Theresa May has triggered Article 50, the official starting gun for the UK to leave the bloc. Negotiations are likely to start in June with the aim of agreeing legal texts around October next year so that the UK can leave by 29 March, 2019. With the clock ticking, how is the scientific community coming to terms with the reality of Brexit?

Most researchers remain very concerned about staffing and student issues. At the same time, the offer of more money for R&D – in November, the government promised to raise real-terms spending on R&D by £2 billion a year by 2020 – is seen as a win by many. But the biggest threat appears to come from the continuing uncertainty around the UK’s future relationship with the EU.

This relationship ‘has clear implications for universities in the UK’, says Julia Goodfellow, president of Universities UK (UUK) and vice-chancellor of the University of Kent. ‘There are currently more than 125,000 students from other EU countries studying at UK universities and 17% of academic staff are from EU countries. The UK is a major beneficiary of the EU’s Horizon 2020 research and innovation programme and networks,’ she adds. UUK’s major concerns are increased barriers to recruiting European staff and students, damage to international research collaboration and loss of research funding.

John Holman, president of the Royal Society of Chemistry, said ‘it is positive that the UK government has recognised science and innovation as one of their 12 negotiating objectives for EU exit’. The RSC said it will now work ‘to inform and influence’ the negotiations.

A key issue is to ensure that the UK remains welcoming to EU students and staff, says Goodfellow. ‘Most urgently, the government should provide reassurance to EU nationals currently working in the university sector on their rights to reside and work in the UK post-exit. We also need the government to confirm that EU students starting a course in 2018, will continue to be eligible for home fee status, and be eligible for loans and grants.’ Heriot Watt University recently blamed Brexit uncertainty for the loss of one hundred jobs and £14 million of cuts after is was hit by falling EU student numbers.

EU nationals working in universities are also anxious about their position. ‘Many top research institutes and universities have a very large contingent of EU staff,’ says Andrew Steele, a computational biologist at the Francis Crick Institute and chair of campaign group Science is Vital. ‘Over half of the postdocs at the institute come from EU countries, and that figure is not atypical. Scientists are highly internationally mobile, and often move with partners or families who might have difficulty obtaining a visa after Brexit.’

Rob Davidson, executive director of campaign group Scientists for EU, says he has heard that ‘many’ researchers have left already or say they will leave in future either because of visa problems or a family member’s concerns. Brexit is also having indirect effects on researchers from the rest of the world. The wife of an Australian postdoc who recently joined the group of Tom Welton, dean of the faculty of natural sciences at Imperial College, London, was told she would have to wait up to a year to get a work visa thanks to a Brexit backlog. ‘There is no way that a couple on one postdoc salary can have a comfortable life here in London. So they will not stay. This is just one example of the unforeseen consequences of Brexit. There will be many others.’

Researchers hope that the UK will continue to participate in the EU’s €80 billion (£69 billion) Horizon 2020 research programme, even if the end-date is post-Brexit. But it is not clear if the UK will be able to play a role in its successor, the 9th Framework Programme. Continued access to other schemes, such as the student exchange programme Erasmus+ and the Marie Skłodowska-Curie Actions programme for hosting talented foreign researchers, is also in doubt.

Kieron Flanagan, senior lecturer in science and technology policy at the Alliance Manchester Business School, says that after the referendum many people thought participation in research programmes would continue. ‘But this has all changed now with the prospect of a hard Brexit. It will make negotiating full access to programmes very difficult.’

We could end up with a ‘monoculture’ funding system

Steele agrees and says one recent example is informative. ‘Switzerland’s access to Horizon 2020 was suspended after a referendum narrowly came down against freedom of movement. If this really is a red line in negotiations, it’s very hard to see how we could maintain our participation.’ Switzerland subsequently relaxed its migration rules and rejoined the science schemes. ‘If the UK is given any better deal, Switzerland would be greatly aggrieved,’ Davidson says.The UK has indicated it will not accept freedom of movement once outside the EU.

The UK is a net beneficiary of EU research programmes. Under the 2007–2013 Framework Programme 7, the UK won around €8.8 billion in grants, while paying in around €5.4 billion. The country is also one of the main players in Horizon 2020, securing over 16% of funding. EU funds now make up 17% of the total science research grants in UK Higher Education Institutes (HEIs). Significantly, a huge 73% of the increase in HEI science funding from 2007–2014 can be assigned to EU sources.

‘If we lose access to all EU funding, the new £2 billion per year committed by the government would just about cover the losses in financial terms,’ says Steele, ‘but it is very unlikely to replace the vital international collaborative role of EU funding, nor be as supportive of basic research.’

While the government’s funding injection is welcome and unprecedented, Flanagan says, details on how the money will be spent remain vague. ‘A majority of it will go on industrial strategy priorities, which as fine as the UK has a bit of a gap in funding there, but where will the rest go? I would be surprised if it went into the traditional funding system of responsive grants.’ But it’s not just about the money, adds Flanagan. The UK is moving from being one of the most diverse funding systems in the world to one of the narrowest. ‘The EU funds research that is different and complementary to national funders, but that is going to be lost. At the same time, the research councils are merging into one body so diversity will be lost there too. We could end up with a “monoculture” funding system.’

However, Emma Raven, head of the department of chemistry at the University of Leicester is more positive. ‘It’s difficult to say, at the present time, what the impact on funding will be. The new Global Challenges Research Fund might help, but it will take time for these new schemes to bed in. There will likely be opportunities to develop relationships with different partner countries.’

‘Brexit will end up in the fullness of time – assuming it is so-called hard Brexit – being a total disaster for the UK and for Europe,’ says chemistry Nobel prize winner Fraser Stoddart. ‘History will not be kind to the politicians in the UK who have orchestrated this fiasco.’ He adds: ‘If I was running a research group in the UK with a large component of students from different countries, as I do presently in the US, I would be looking to leave as quickly as possible. Doing cutting-edge research is all about people. It is not about money.’

The long-term effects of Brexit are impossible to predict, says Welton. ‘There is no way of knowing how high up the issues of importance to science will be on the government’s agenda. I suspect not very high. So we will end up having to make the best of decisions that are made for other reasons.’