Carbonated soft drinks bottles consume around 20 million tonnes of polyethylene terephthalate (PET) a year, almost all of which is made using antimony catalysts. Catalytic Technologies, a start-up based in Stockton-on-Tees, UK, is trying to convince manufacturers to switch to a safer, more active titanium-based catalyst.

‘There are lots of problems with antimony,’ says company director Alan Cooper. Its toxicity creates exposure hazards for workers when handling the solid powder, and when it is released into dust during processing. ‘It’s also not very active – you have to use around 250 –300ppm in the polymer, and that causes problems throughout the process. It’s effectively like sand – it blocks filters and fouls plants – which means there’s more shutdown time.’

Cooper adds that the antimony stays within the polymer after production and processing, and can leach out of drinks bottles. ‘There’s still debate over whether the amounts that leach are or aren’t safe,’ he says. ‘But there’s definitely a feeling within the industry that it would be better to remove it completely from polyester. Until now, there just hasn’t been a feasible alternative catalyst.’ 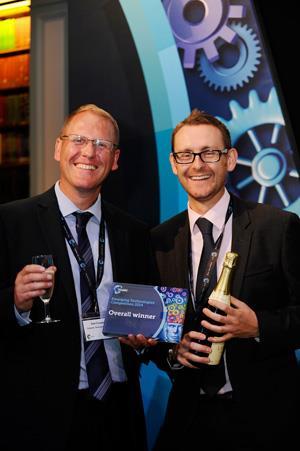 Catalytic has developed a new kind of titanium-based catalyst for PET production, which Cooper believes could displace antimony. Environmentally, titanium is relatively benign, he says, and because the titanium catalyst is much more active, only 1/25 the amount is required. ‘Because there’s a lot less in there, it doesn’t foul the plant equipment, and because it’s supplied as a solution in water – rather than a solid – all the processes are much safer and easier.’

The key to developing a successful titanium catalyst for PET lies in producing a well-defined, monomeric titanium species, explains technical manager Richard Ward. ‘Titanium catalysts for polyester aren’t new – they’ve been known for years, but they haven’t been successful in industry,’ he says. ‘Historically, people were producing catalysts, but didn’t realise that they had titanate clusters in them, with titanium atoms bonded together through an oxygen atom.’

Having multiple catalytic titanium atoms bonded together leads to side reactions in the polymerisation process. ‘The active sites work together to break up the chains,’ Ward explains. That reduces the thermal stability of the polymer, and also causes problems when reprocessing for recycling, as the shortened chains alter the processing and performance of the material.

But replacing antimony isn’t the only benefit of switching to the titanium catalyst, says Ward: ‘The polyester product, when you melt it, has a much lower melting energy. You can process it faster and with less energy, and when you turn it into a bottle, the bottle has brighter, clearer and stronger sidewalls, which has advantages in terms of the weight a bottle needs to be for a certain strength, but also the barrier properties for maintaining CO2 in carbonated drinks, for example.’

However, those advantages also erect a barrier to the industry adopting the new catalyst, as Cooper explains. Bottles are not usually transported in their final shape, as they’re very bulky. Instead, drinks manufacturers buy ‘preforms’ – short tubes with moulded screw threads for the caps, ready to be blown and filled at the bottling plant.

We don’t just show customers our products – we let them take them away and test them, and they’ve never been able to do that before

‘Pre-forms made with antimony and titanium process quite differently,’ says Cooper. ‘Their crystallisation behaviour is different, so you can’t use the same equipment parameters.’ The polymer itself is identical, he points out, but the residual catalyst makes them behave differently. That means that the whole industry – 20 million tonnes/year of manufacturing capacity in about 100 facilities around the world – would need to switch over in a relatively short space of time. Manufacturers are rightfully wary of such a risk, because the profit margin on bottles is very tight.

There’s also the difficulty of convincing manufacturers that the catalyst is different to other titanium catalysts. ‘What we’re able to do is go to customers with pre-forms and bottles and say “here you go”,’ says Ward. ‘We don’t just show them in a room or on a slide presentation – we let them take them away and test them, and they’ve never been able to do that before.’

Catalytic has already demonstrated the technology on smaller plants making PET films and clothing fibres, which helps convince manufacturers that the new catalyst isn’t going to damage their plants. ‘That’s a big concern for a bottle plant that could be processing $1 million of plastic a day,’ says Cooper.

Manufacturers are also worried about the whole industry becoming reliant on a single catalyst supplier. ‘We’ve got a manufacturing facility on board that’s big enough to supply the entire global polyester demand,’ says Cooper. ‘And we have two areas of a site where we would produce the catalyst, each with its own infrastructure and utilities, so if there’s an issue on one side of the plant, they can switch over without interrupting supply.’

‘We’ve got several large players about to perform full commercial trials of our catalyst on their facilities, but to get it onto the market, we need to convince everyone along the supply chain.’ says Cooper. ‘It’s been a long process, and winning the RSC’s Emerging Technologies competition in 2014 really helped raise our profile and credibility, but now we’re coming up to the final hurdle. The end of this year is going to be very interesting.’