Plastic waste from drinks bottles and food packaging can be transformed in a new process into cyclic and aromatic hydrocarbons, which can then be used as important components of diesel and jet fuel.

‘A huge amount of plastic is discarded after use, causing big environmental problems’, says green chemistry expert Liangnian He from Nankai University in China, who was not involved in this work. This issue has recently been gaining increasing global attention, with some calling for an all-out plastic ban. Others think the solution lies in converting this waste into valuable products and chemicals. 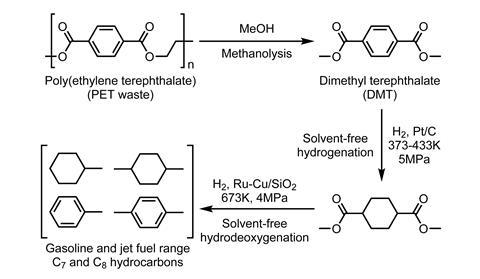 A team led by Tao Zhang and Ning Li from the Dalian Institute of Chemical Physics in China, has come up with a process to convert one of the most common plastics, poly(ethylene terephthalate) (PET), into a mixture of C7 and C8 cycloalkanes and aromatics, suitable to be blended into jet fuels or diesel. ‘A lot of people are worrying about plastic waste. Why not convert it to something more useful, for example gasoline and bio-jet fuel?’ says Li.

The work also solves another issue. Aromatics are absorbed by polymer seals within the engine more readily than straight-chain alkanes in regular fuels. This causes the polymers to swell, and counteracts shrinkage caused by leaching of other molecules out of the seals, which helps prevent fuel leaks.

PET from plastic bottles is first broken down into dimethyl terephthalate (DMT) using methanol. Once the reactor has cooled down, the DMT settles as a solid and can be easily separated, allowing the remaining methanol to be re-used. The DMT is then converted into the desired hydrocarbons by hydrogenation followed by hydrodeoxygenation. These catalytic conversions are similar to established reactions, using fairly standard catalysts, so have the potential to be easily implemented industrially.

Both of these final steps are also solvent free – which avoids generating unnecessary waste streams – and use heterogeneous catalysts. Biofuel expert George Huber from the University of Wisconsin-Madison, US, explains that this makes the process ‘very green’ as there is no separation step and the catalyst ‘can stay in your reactor for years’.

The technique therefore appears to be a promising way to divert plastic waste away from landfill. The real test, however, may be in implementing the process commercially. ‘The challenge lies in getting a large enough quantity [of plastic waste] in a single location and with the economic incentive to recycle and recover the value’, says Huber. ‘I think it’s also going to require policy to allow us to use technology like this’.