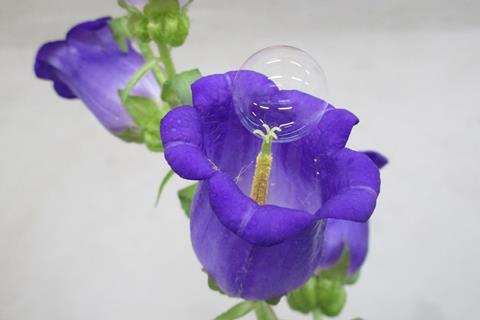 Soap bubbles are a cheap and effective way to pollinate flowers and could help farms continue to supply food as insect numbers decline.

In recent years, scientists have recorded a worrying drop in populations of bees and other pollinating insects. This has serious implications for the agricultural sector, as without bees flowering crops aren’t pollinated and fruits don’t develop. As a result, many researchers have tried to develop new ways to pollinate plants.

Some methods that spray pollen into the air are wasteful because they lack precision, while techniques such as hand-pollination are too time consuming and labour intensive for large farms.

A team led by Eijiro Miyako at the Japan Advanced Institute of Science and Technology previously tried to use bee-sized drones, but the robots ended up damaging the flowers they were sent to pollinate. But now they believe they’ve found the perfect solution: soap bubbles.

‘Approximately 90% of flowering plants depend on pollinators to reproduce, and pollination is critical to most major crops around the world,’ explains Miyako. ‘However, the number of insect pollinators is dramatically decreasing due to climate change and poisonous pesticides etc. This is a worldwide crisis.’

While he and his son played with a bubble gun in a local park, Miyako realised that bubbles have characteristics that could make them effective pollen carriers. Like bees, bubbles can capture pollen grains and are very gentle – able to land on delicate flowers without damaging them.

Back in the lab, Miyako and postdoc Xi Yang tested out different soap solutions to find the best formula for delivering pollen. First they compared five different commercial surfactants to see which produced the most bubbles and how they would influence pollen activity.

Having chosen a foaming agent, Miyako and Yang then optimised the soap solution’s concentration and pH, and even introduced additives such as calcium and magnesium salts to promote germination and pollen tube growth. Finally, they added the polymer hydroxypropyl methylcellulose, which is often used in eye drops, to improve the strength of the bubble membrane and its stickiness.

Miyako explains that the chemically functionalised bubbles’ unique properties improved the attachment of bubbles to the pistils of targeted flowers, and minimised the amount of pollen needed to ensure fertilisation.

To test their system, Miyako and Yang carried out field work in a pear orchard. Here, they used a toy bubble gun to fire bubbles at pear tree flowers, with each bubble delivering 2000 pollen grains. By analysing the numbers and size of fruits on different trees, they discovered that the bubble-pollination technique was as effective as hand pollination – overall, bubble gun-pollinated trees produced almost twice as many fruits as trees left to pollinate naturally.

Miyako points out that another benefit of bubble pollination is that it can easily be carried out on large farms by autonomous robots. To demonstrate this, Miyako and Yang loaded a bubble maker onto a drone and used it to aerially bombard lily flowers from a height of two metres. With the drone flying at 2 metres per second, they could hit their targets with a 90% success rate. 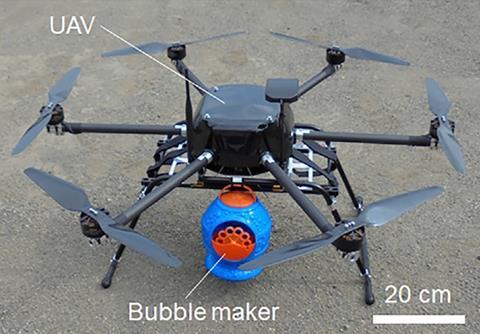 ‘The big advance here is the efficiency of pollination,’ says David Hu, who researches fluid mechanics and biomimetic technologies at the Georgia Institute of Technology. Hu explains that it’s not the first time that bubbles have been used in sophisticated ways – for example, they’ve been used as key components in microfluidic computing devices. ‘While they seem like everyday objects, they can be precisely generated and made into finely controlled methods for deposition of valuable particles,’ he adds.

The next goal for Miyako is to improve the accuracy of the bubble pollination system. ‘I believe that further innovative technologies, such as state-of-the-art localisation and mapping, visual perception, path planning, motion control and manipulation techniques will be essential for developing autonomous precision robotic pollination on a large scale,’ he says.