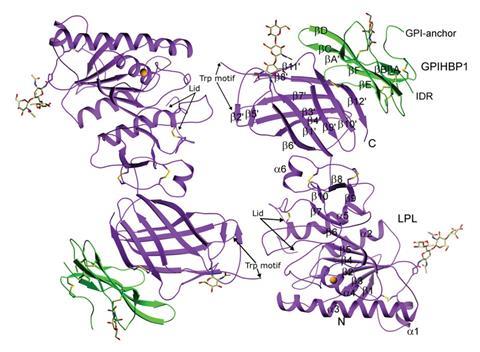 After years of work the elusive structure of lipoprotein lipase (LPL) has finally been determined. The enzyme is a promising target for treatment of several rare cardiovascular disorders.

To finally solve the atomic structure of LPL researchers needed to combine it with a chaperone, a protein called GPIHBP1. In the bloodstream GPIHBP1 captures and carries LPL to capillary walls where it then processes triglyceride fat molecules. Any disruption to LPL’s processing of triglycerides can cause serious cardiovascular problems.

Gabriel Birrane says that this was ‘a good example of collaboration between academic groups and industry to solve a problem that’s been persisting for years’. Birrane, a crystallographer at Beth Israel Deaconess Medical Center in Boston, worked with Shire Pharmaceuticals for years on the structure of LPL. The breakthrough in the use of the LPL–GPIHBP1 complex was just one of many difficult steps in a process that involved finding a cell line to produce LPL in large quantities and conditions to keep it stable during crystallography experiments.

‘I was pessimistic about the project but the collaborators wanted to keep it going because it is an important target,’ says Birrane. After many failed attempts they turned to GPIHBP1. ‘It probably would have been our last effort,’ say Birrane. ‘Putting it together with GPIHBP1 turned out to be the way to go and that breakthrough was like night and day.’

According to Dirk Blom, head of the division of lipidology at the University of Cape Town, disorders involving mutations in LPL or GPIHBP1 can be lethal. Patients have triglyceride levels 10 to 100-fold higher than normal, which puts them at risk for recurrent, acute, possibly lethal pancreatitis. To date the only treatment is a strict low fat diet which isn’t popular with patients. Having the structure of the enzyme behind some of these disorders is therefore a step in the direction of protein replacement therapies and other treatments for these patients.

Mutations to LPL or GPIHBP1 are not the only disorders involving lipolysis, which Blom says is an extremely complex process involving many molecules. Therefore, he believes, ‘in general medicine will do well the more we understand about LPL and having a structure to work with is a nice step toward a deeper understanding’.

Birrane plans to investigate LPL further by taking snapshots of LPL interacting with lipolysis molecules. Other groups too can benefit from this technique and determine the structures of other therapeutic molecules. Birrane hopes that ‘this work will be much easier now that we have all the starting materials’.